Every once in a while Nissan gives us privileged access to what goes on in the far extent of its corporate brain. You see, Nissan is far from a conventional car company. Despite its mainstream success, it actually plays by quite an odd set of rules. Periods of apparent conformity are interspersed with bursts of what can only be described as automotive eccentricity. The Nissan Cube, sold in small number here between 2009 and 2011, is in fact far from Nissan's most left field offering, but proved too alternative for most target buyers. Here's what to look for if you're interested in picking up a used example.

Eccentric might seem quite a strong word to describe Nissan's output but how else to explain the cars that emerged from Nissan's special projects division in the late 1980s? The Pike Car Series of the Be-1, Pao, and Figaro weren't anything radical from an engineering perspective, effectively being Micras underneath, but the throwback styling, sparse cabins and sheer attention to detail of these vehicles couldn't have been carried off by any other manufacturer. Think of these cars as precursors of the retro car boom. Nissan realised that there was clearly demand for 'dressing' mainstream models in radical clothing for niche markets, and in 1998 the Cube was born. Again riding on Micra underpinnings, it was launched solely in its domestic market, although a handful found their way to the UK via the personal import route. This was followed by a bigger and more radically-styled second generation car in 2002 and a third generation model in 2008. This is where Britain comes in. A number of potential customers had petitioned Nissan to officially import the Cube and right-hand drive imports duly began in 2009. Those customers clamouring for the Cube bought cars and then... nothing. It seems the UK wasn't ready for quite such an undiluted chunk of Japanese esoterica and Cube sales stalled. It was finally withdrawn from sale in early 2011.

The Nissan Cube's quirkiness is at least partially explained when you learn more about the people behind it. The design team apparently spent most of their time pooling thoughts and ideas rather than embarking on a more regimented process as favoured with other models. Out of this brainstorming hotchpotch emerged a cartoon of a bulldog wearing sunglasses and around this 'incognito canine' the Cube's look was formed. It really does take all sorts. The Cube's elongated headlamps that spread right across the grill joining in the middle are the sunglasses while the chunky shape and foursquare stance do give it a suggestion of bulldog if you squint a bit. What's definitely noticeable is that the Cube is devoid of sharp edges. Despite its boxy look, its extremities end in soft curves which help create its cuddly persona. At the rear, the door is side hinged and opens like a fridge so you can access cargo even in tight spaces that would restrict a top hinged tailgate. Once you get inside, the design comes over more curvy still but the theme remains geometric, inspired by the circular ripples that spread when a drop hits a pool of water. Nissan claims to have created a 'casual lounge' interior with the sofa-style rear bench arranged in a 'jacuzzi curve'. It all sounds very luxurious and looks a long way removed from traditional car interior design. There's practicality too. Thanks to the Cube's boxy dimensions and long wheelbase, space is generous and Nissan has incorporated a range of storage options. Cup holders, detachable hooks, shelves, even multi-coloured rubber bands that secure items on the door arm rests, there's a lot of detail built in that adds to the Cube's user-friendly nature. 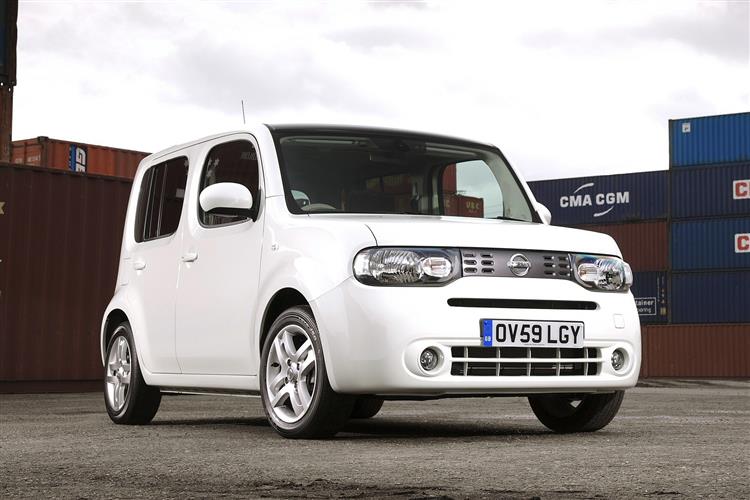