V FOR VICTORY (some text hidden)

There's a certain commodity quality about panel vans that Mercedes is keen to dissuade us from. By and large it has succeeded, which is why, despite its premium pricing, the Vito van consistently outsells cheaper rivals. Buying a used van can be a minefield as servicing can be hit and miss and they can lead hard lives, driven by operators with no mechanical sympathy and who aren't footing the bills. With that in mind, it makes more sense than ever to seek out quality when buying used and the Vito should be one of your first ports of call.

The autumn of 1996 saw the arrival of the original Vito in the UK and the vehicle quickly established a strong following among van buyers. Badge prestige and an options list brimming with lavish add-ons meant that the Vito appealed to retail customers for whom cost was less important than comfort and the 'right' image. Perhaps the fact that this was effectively a rebadged Volkswagen Transporter was lost on many but sales proved strong. Decent reliability and buoyant residual values helped soften the blow of the Vito's premium pricing in the eyes of fleet customers. That Mk 1 model was built to 2003, whereupon a second generation model with a more streamlined look and rear- rather than front-wheel drive chassis architecture. Imbued with more typical Mercedes design values, this second generation Vito was capable of heavier lifting and was manufactured at Mercedes' plant in Vitoria, Spain - hence the name. Around 70% of total sales are to retail customers but the vehicle is not without appeal for more thoughtful fleet managers willing to take the longer view. The range was facelifted in September 2010, the restyle incorporating front and rear lights and front bumpers. More efficient diesel engines adapted from the Sprinter range made their debut, too.

What You Getword count: 255

The Vito's designers can give themselves a pat on the back and a big Christmas bonus for shoehorning the van's rear-wheel drive transmission under the floor without pumping up the loading height (562mm in the long wheelbase model) by too much. Space must be at a premium down there but drivers benefit from the improved handling and the tighter turning circle associated with rear-wheel drive as well as the vertebra-friendly access for hoisting gear into the rear. This second generation Vito panel van, with its wedge-shaped front, eye-shaped headlights and gently sloping roofline, is offered in three load lengths - compact, long and extra long. The first two sit on a standard wheelbase of 3,200mm but the largest model gets an extension between the wheels to 3,430mm. Then there is the high-roof model that's available in long wheelbase form only and pushes the load height up from a standard 1,902mm to 2,328mm. The upshot of all this is a potential load volume spread from 4.65 to 6.49 cubic meters. There's 1,277mm between the wheelarches, so that Europallet will fit. All Mk 2 Vito panel vans share the same permitted gross vehicle weight, 2,770kg. The largest payload potential of 980kg comes in the most compact Vito and the smallest - 850kg - is in the extra long model. The Vito range is completed by the Dualiner and Traveliner derivatives, the former adds an extra row of seats behind those in the front, while the later is a fully-fledged minibus with an increased 2,940kg gross vehicle weight. 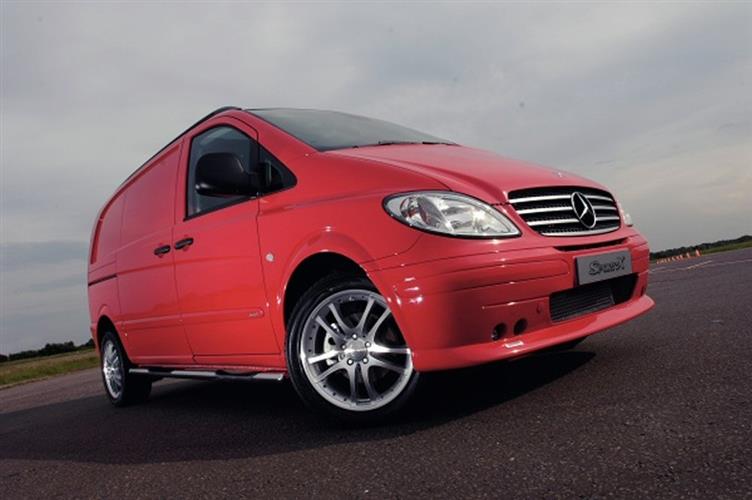