THE WORLD IS NOT ENOUGH (some text hidden)

Had you never driven this MK3 generation Ford Mondeo, you might well think that here was a concept past its sell-by date. You could easily believe that nobody buys this sort of mass-market midrange car any more and that the private buyer long decamped to the superior residual values of the premium marques. Drive a Mondeo and your view will be completely different. You'll realise that this is where the value lies, especially in the used market, and that you're buying a car that flows down a road so much better than a bare bones BMW or an austerity-spec Audi. Here we take a look at the Mondeo as it developed en route to its 2011 model year facelift and highlight what to look out for.

It didn't take long for Ford to realise that some of the engines the MK3 Mondeo was launched with just weren't going to cut it in the face of competition from cars like the Vauxhall Insignia, the Citroen C5 and the Mazda 6. Ford's response was to introduce an efficient and much torquier 203PS 2.0-litre EcoBoost SCTi petrol engine while tweaking its 2.0-litre Duratorq TDCi diesels to Euro Stage V, snatching back the efficiency losses and propelling them back to the top of the class. Bolstering the Mondeo's case was a clever 6-speed twin-clutch automatic transmission system that's fitted as standard to the 2.0 SCTi and available as an option on the more powerful diesels. This helped the Mondeo claw back valuable market share ahead of the refresh to the styling at the end of 2010.

What You Getword count: 399

Before this MK3 Mondeo arrived, Fords had begun to look rather clinical, a little over-functional. We were all told they were great to drive but we didn't feel that they were going to be when we saw one in the driveway. Fortunately, this MK3 Mondeo moved things on. British styling Director Martin Smith created a more arresting shape that's slightly longer and taller than the second generation model, as well as being much wider. The emphasised wheelarches, the kicked-up waistline, the large air intake low in the front valance: whether you opt for the 5-door hatch, the estate or a minority interest 4-door saloon, it's all more distinctive. And of much higher quality inside. It's not quite up there with BMW, Audi and Mercedes - things like the cheaper plastic on the glovebox lid give the game away - but it is amazingly close for a mainstream brand, with tasteful aluminium decor and piano-black lacquer inserts offering a real premium touch to those who wisely avoid the fake wood of the Ghia model. At the wheel, the high window line pushes you into driving with the height adjustable seat well cranked up and it's not that easy to judge the extremities of the car, particularly when you're reversing. Still, the seat itself is brilliantly comfortable with plenty of adjustment to enable you to perfect your perch. Where you particularly notice the extra space on offer from that bigger shape is here in the back. Three big adults across the back seat or an Audi A4 or a BMW 3 Series is a squash that's only slightly improved if you opt for something mainstream like a Vauxhall Insignia or a Renault Laguna. Here, it's no problem at all, with superb space for shoulders, legs and heads. Wide opening doors and minimal wheelarch intrusion mean it's easy to get in and out too and nice touches on plusher versions like this one include these rear cabin air vents built into the B-pillars. The boot, too, is huge and very well shaped, with load hooks and tie-downs to help you keep things in place should you get carried away at the wheel by the Mondeo's dynamic chops. There's 528-litres of space on offer in this 5-door Hatch, a figure rising to 1448-litres if you flatten the 60/40 split-rear seats. Go for the Estate version and the respective figures are 542 and 1733-litres. 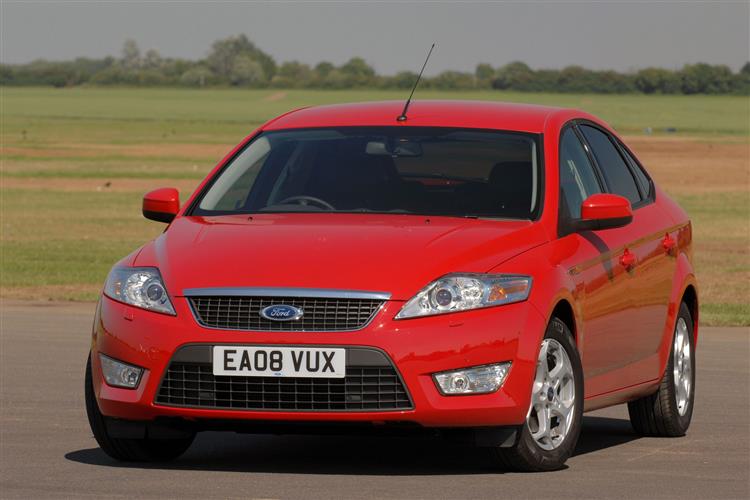