Renault's Kangoo might be more familiar to you as a budget MPV people carrier but this version owes its existence to a commercial vehicle that started off as a slow seller but rapidly became an established favourite, shifting 1.3 million units during its lifespan. The Kangoo van is offered in three distinct flavours - compact, standard and Maxi - but we'll concentrate here on the one that makes up the bulk of the sales, the mid-sized model. Simple, tough and affordable, the Kangoo van more than justifies its market position.

The original Kangoo debuted way back in 1997 and established Renault's reputation in this sector and it took fully ten years until Renault felt the need to launch the second generation model, showing the all-new van at the 2008 European Road Transport Show in Amsterdam. This time round, the passenger version got the drop on the commercial vehicle, having been unveiled at Frankfurt a few months previously. Renault's key aims with this model were to improve its design, further its practicality and work on its environmental friendliness. Three engines were offered, all based on the same 1.5-litre dCi diesel block, and offered 70, 85 or 105bhp outputs. A purpose-built high cube van fit to rival models such as Vauxhall's Combo and Volkswagen's Caddy, the Kangoo has acquitted itself well since introduction. Its appeal was strengthened further in October 2008 with the confirmation of a 3 year/100,000 mile warranty (first two years unlimited mileage) across the entire range.

From the outside, this Kangoo looks relatively similar to the first generation model but slip inside and it's clear that this is a far more modern proposition. Whichever bodystyle you choose the cab is pretty much identical. The windscreen is placed well forward of the driver and the impression is that you're at the helm of a much bigger vehicle than you really are. Because the Kangoo doesn't have a raised roof, it's overall height of just 1.82m means it's compact enough to use in city centre car parks. The basic dashboard design is lifted wholesale from the MK2 Scenic MPV with its two-tone finish, aviation-style handbrake designed to minimise strain on the wrist and dash-mounted gear lever. Certainly, by the standards of the compact van market, quality of fit and finish is impressive. The upright driving position also facilitates easy entries and exits. An enormous amount of headroom is present in the front of the Kangoo, enough so that all kinds of elaborate headgear could be accommodated should the occasion arise. Though there's no optional middle seat of the kind that some rivals offer, space for driver and passenger is more than adequate, with only the passenger legroom (slightly restricted by the sloping floor) giving any cause for concern. 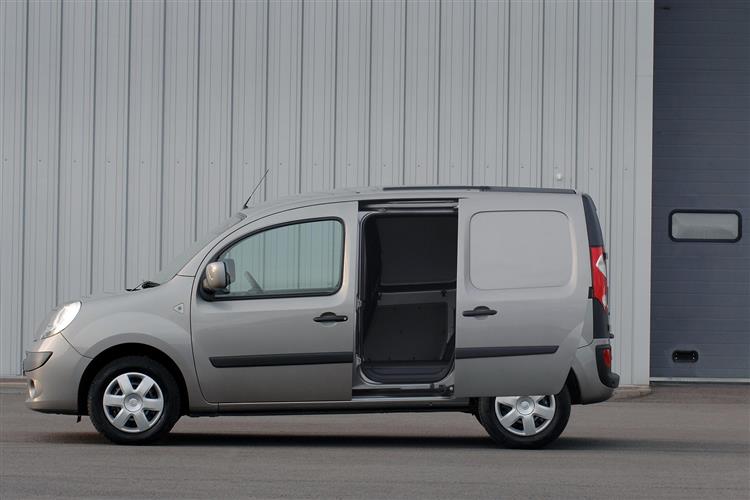