If the idea of a convertible car appeals but you'd prefer something more substantial than a few layers of material overhead, a model with a folding hard-top roof is the only answer. The technology is widely available at accessible prices and a large part of the thanks for that must go in Peugeot's direction. The French manufacturer played the major role in developing the affordable hard-top convertible market but does its 207 CC make a good used buy or are there drawbacks lying behind the obvious attraction?

Before the Peugeot 206 CC appeared back in 2001, the folding hard top convertible was strictly the province of luxury cars, usually with a three-pointed star on the bonnet. Cars like the Mercedes SL and SLK had shown that the technology was relevant and reliable and all that needed to happen was for a manufacturer to bring it within reach of the masses. The 206 CC went on to become the best selling convertible car in the UK for three consecutive years and with more than 360,000 units built, it proved to be the world's favourite small coupe-cabriolet. That's was some record for the 207 CC to live up to. Based on the 207 supermini, the 207 Coupe-Cabriolet arrived in 2007 and by that stage, there was a far larger group of rivals than the 206 CC was ever forced to contend with. Peugeot's success with the 206 CC and the larger 307 CC had tempted other manufacturers into the fray and the 207 CC had the likes of Vauxhall's Tigra, the Mitsubishi Colt CZC and the Nissan Micra C+C sniping at it. Things only got tougher as more and more small convertibles arrived and this is the main reason why the 207 CC never replicated the success of the 206 version. From the outset, there were three engine options, two petrol units and a diesel, all of them 1.6-litres in capacity. The entry-level option was a 120bhp 1.6 and above that sat the 1.6 THP that generates 150bhp with the aid of a turbocharger. The 1.6 HDi diesel offered 110bhp and the best fuel economy. The car came in Sport or GT trim and Peugeot occasionally supplemented these options with special editions including the Elle in 2008. The 120bhp petrol engine was offered with an optional four-speed automatic gearbox but otherwise, all models got five-speed manual transmissions.

The 207CC doesn't deviate too much from the template set by the 206CC but the proportions are a little less stubby and the silhouette a few degrees more elegant. With 2+2 seating (although you wouldn't want to try to lever adults into the back seats), the 207CC is 4.04 metres long, adding 21cm to the length of the 206CC. The 207 is bigger in most regards than its predecessor, tacking 10cm onto the overall width, although 4cm is deducted from the car's height, helping render that more swooping look. Body rigidity is always a key priority when designing an open car and Peugeot worked hard at improving the 207CC's torsional stiffness. Operating the roof is simplicity itself. With a similar system to the 206 CC, the 207 CC roof differs significantly in terms of convenience thanks to its entirely automatic operation. In other words, no more of the manual release handles that ladies used to break their fingernails on. The only manual operation consists of pressing the control button for around 25 seconds, during which time the opening or closing cycle is completed, after all four windows have been lowered automatically. To ensure optimal roof sealing and to assist the opening of the doors, the electric front windows are equipped with an "automatic window drop" system. Like all modern Peugeot models, the 207CC differentiated itself by offering a lot of equipment as standard, bringing big car electronics to this section of the market. The air conditioning system is dual zone, offering the front passengers the opportunity to select their individual ambience and it will detect whether the hood is up or down, adapting airflow accordingly. The available in-car entertainment options are also very impressive, ranging from a relatively straightforward RDS CD system with or without a Bluetooth hands-free kit right up to a very serious JBL hi-fi system. The Sport models have 16" alloy wheels, air-conditioning, remote central locking and electric windows. There's also ABS brakes with brakeforce distribution and brake assist. The GT model adds 17" alloy wheels, ESP stability control and a number of other features. 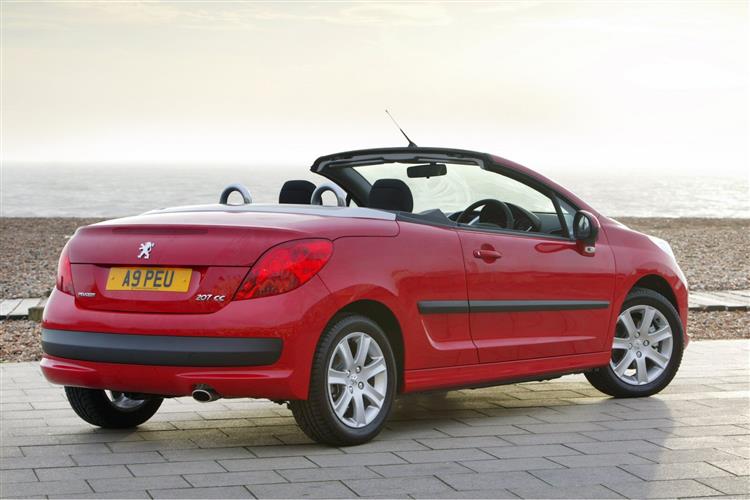