THE SCENIC ROUTE, ONLY LONGER (some text hidden)

Most manufacturers wrestled for some time with the question of whether to build their mini-MPV models with five or seven seats. Renault didn't mess about when they were faced with this issue. They built the five-seat Scenic and the seven-seat Grand Scenic, a model with a longer wheelbase, to cover all their bases. Arriving a year after the Scenic II paved the way, the Grand Scenic perhaps justified the decisions of many manufacturers to go the five-seat route, as it has been a modest seller, but if you do have a larger family or a rather hectic social life, the extra pair of seats can be invaluable. Used examples are now starting to appear in meaningful numbers and if you're prepared to be patient, you can unearth some real bargains.

The Scenic model has been around for years, in its first incarnation it was badged the Megane Scenic. This car enjoyed a good run at the market for a couple of years before Vauxhall in the UK and Opel in Europe launched the Zafira. With a clever seven seat capability and costing much the same as the Renault, buyers plumped for versatility and Scenic sales levelled. The cut-price Citroen Xsara Picasso also weighed in to put a dent in Renault's bottom line. The launch of the Scenic II showed that Renault was playing a smart game, using a chassis that could be configured in both standard and long wheelbase guises. The standard Scenic was usefully bigger than its predecessor, but it's the car that we examine here, the Grand Scenic, that really allowed Renault to answer back with interest to more cramped seven seaters like the Zafira and the Toyota Corolla Verso. Height-wise it's within a centimetre of the first generation Espace large MPV, but it's a significant degree longer, a bit wider and the cabin is massively more space efficient. From launch there was a 1.6-litre 16v VVT unit, a 2.0-litre VVT, a punchy 2.0-litre turbo and a pair of diesel powerplants, the 1.5-litre dCi 100 and the 1.9-litre dCi 120. The diesels were given a power boost around the summer of 2005 at the same time as modifications were made to render them compliant with the EuroIV emissions regulations. The dCi 100 became the dCi 106 and the dCi 120 got 130bhp for its trouble. Rush and Oasis special edition models joined the range in January 2005 and 2006 respectively. A major facelift befell the Grand Scenic in mid 2006, the biggest alteration being to the styling, Renault giving the car a nip and tuck in order to keep it looking fresh. Xenon-look headlamps, LED rear lights and revised front and rear bumper assemblies give this mini-MPV a sharper, more contemporary look. The interior was revised too, with better quality trims, and a different palette of exterior colours. The 2.0-litre turbo petrol engine met its end at this stage but a 150bhp 2.0-litre dCi diesel far more in tune with the Scenic's character took its place. A five seat version of the Grand was added to the range at this time. This neatly solved all of the 'people or baggage' quandaries faced by many mini-MPV owners by offering five adult-sized seats and a 501 litre baggage capacity (up from 104 on the seven seat car). There's even another 32 litres of underfloor storage where the last row of folding seats once went.

What You Getword count: 808

The Vauxhall Zafira may have started the trend for seven-seat mini MPVs with its ingenious Flex7 seating system, but there have been a host of imitators following in its wake. Some have been good but the majority have been very poor, offering a vestigial pair of seats at the back with dreadful access. Having the kids' muddy feet clambering all over the upholstery is never ideal but these are the compromises many of these vehicles impose. Renault decided early on in the planning cycle of the Scenic brand that the job wasn't worth doing at all unless it was tackled properly. Looking at the back of a Scenic there's little doubt that the French company could have adopted a similar tactic and wedged in a pair of flimsy dicky seats but instead they've used an entirely different chassis that has also doubled up for models like the Megane Sport Saloon. This 'platform sharing' philosophy helps to defray the costs in developing the new models but also means that with an extra 23cm in length, the Grand Scenic is a good deal bigger than many of the early full-sized MPVs we fondly remember. What's more, at 4.49 metres in length, it's a mere 13cm shorter than something like a Volkswagen Sharan or Ford Galaxy - models that compete in the class above. Much of that additional length came about by extending the rear overhang by 18cm. The minimal 5cm grafted into the wheelbase means that the Grand Scenic doesn't look particularly different to its more compact sibling. This is entirely intentional, as Renault didn't want to ruin the Scenic's smart lines by merely creating a crude 'superstretch' version. The two additional rear seats are neat items but suffer the usual problem of the seat squabs being very low to the floor. The flipside of this - if you'll excuse the pun - is that they can be folded in one motion completely flat into a void beneath the floor. This means that the Grand Scenic can operate as a five seat vehicle with a cavernous luggage area which refutes the usual MPV complaint that once loaded with a meaningful complement of passengers, there's nowhere for the luggage to go. It also means that the Grand Scenic can be easily configured as a five, six or seven seat vehicle, the rearmost seats folding away individually with a one handed movement. With a carpet covering them in their recessed position, few would even realise they were there. Access to the rear pair of seats is reasonably good, the Grand Scenic featuring jacks beneath the second row to hold them in their folded position to ensure safe tilting. Because the second row of seats are separated individually, two passengers can still remain in them while the third is tilted to effect an entry. Legroom in the back is fairly good and two adults can be accommodated if the occupants in the second row aren't of basketball star dimensions. All this multifarious adjustability may give rise to a few arguments between the kids but think of it like this. If they can hold their own in the Grand Scenic, they'll be demons by the time they start flying long haul! When configured in seven seat mode, the Grand Scenic still contrives to offer the largest luggage space in its class with a purposeful 200 litres capacity. Flip the back pair of seats earthwards and you'll have between 550 to 605 litres available, depending on how far the second row of seats are slid back. With the second row of seats removed, there's a vast 1,920 litres of room - almost enough for a London estate agent to call it a studio flat. If you fold the front passenger seat down, the Grand Scenic can accommodate items up to 2.75 metres long - ideal for weekend trips to the DIY superstore. As well as the seating facility, Renault plough all the benefits of nearly twenty years of MPV expertise into this car with a whole host of family friendly features that reflect real world situations. The rear window opens on some models for easier loading in cramped situations and there's a full 104-litres of space in assorted cubbies, lockers and boxes. These include a three-litre storage compartment for left-side passengers and two big eight-litre bins behind the rear wheel arches. The Grand Scenic cabin is designed with airiness in mind and the huge 1.4sq/m windscreen is bested by the monster 1.61sq/m panoramic sunroof. A bigger rear three-quarter window makes low speed manoeuvring a doddle and the wide-angle interior mirror allows you to keep an eye on what projectile is coming Daddy's way next. With all this glass area, the Grand Scenic can get very hot very quickly, but an excellent air conditioning system is fitted, as are roller sunblinds incorporated into the rear doors. 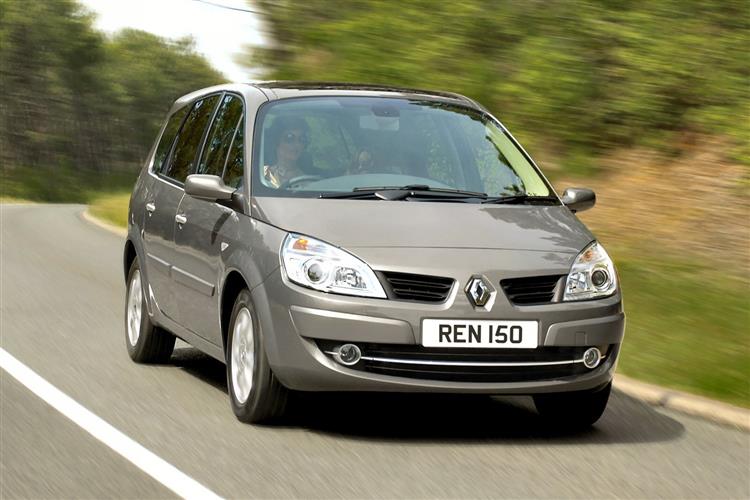