The Ford Focus C-MAX confused quite a few people upon launch in 2003. What exactly was it trying to be? It didn't offer any additional seating capacity over the standard Ford Focus hatch and wasn't as good looking. It was, on the other hand, a fair bit pricier and it didn't feel quite as sharp to drive. Small wonder that sales were initially a little sticky. After a while word got round that the C-MAX was a car well worth having. Well stocked with practical features and riding on the next-generation Focus chassis, it may not have been quite as sporting as the old Focus hatch but it offered more for the family motorist. Here's the lowdown on used examples.

As far as problems go, it's quite a nice one to have. So successful was the Ford Focus hatch that when it came to designing an all-new model, Ford had quite a task on their hands. Instead of trying to replicate the dynamic feel of the old car, Ford's engineers instead opted for a more grown up feel and the first cars to use the next-generation Focus chassis were the Focus C-MAX mini-MPV and the Volvo S40/V50 models, all of which nevertheless garnered critical acclaim as sweet driving cars. The Focus C-MAX was launched in October 2003 and after a slow start, sales have picked up nicely. Euro IV versions of the diesel engines were offered alongside the non-compliant units at a premium of around £300. Towards the end of 2004 a 1.6-litre Ti-VCT petrol engine was added to the range with 115bhp it was slightly quicker, more frugal and more expensive than the existing 1.6 engine which continued to be offered. A major facelift in the spring of 2007 brought revised styling borrowed from the larger S-MAX model and emphasising the polished driving dynamics of the C-MAX. Sports packs became available on all models from this point.

Think about how we use our cars for a moment. Many of us rarely even use the back seats for anything but shopping bags and jackets. If you've got a family in tow, you may well need four or even five seats but if you seriously need seven seats, it makes sense to go with the additional carrying capacity of a full sized MPV like a Ford Galaxy. Sales figures at the time of the C-MAX launch showed the Citroen Xsara Picasso - a car endowed with a mere quintet of seats - residing in the number one position. Therefore it was Ford's aim to build the best and most practical five-seat mini-MPV possible that would appeal to 'real world' requirements. With a wheelbase some 25mm longer than the Focus, the C-MAX offers a good deal of interior space, helped by a novel seating arrangement. The 'wheel at each corner' design also helps maximise interior dimensions. The styling may disappoint those expecting something as ground breaking as the Focus originally was, but having seen the Fiesta and the Fusion, it's perhaps not surprising that the C-MAX follows a similarly conservative design theme. The metallic finish around the front grille and the jewel-effect lights give the car a Mondeo-like nose, whereas the back end looks distinctly Fiesta. If you'd have sketched a Ford mini-MPV before you'd even seen the C-MAX, you would probably have been pretty near the mark. Still, this is a market where conservatism tends to pay off. If the exterior may be a little underwhelming, the C-MAX more than makes up for it with the ideas factory that is the cabin. Although it's unlikely to be available on entry-level versions, Ford's rear seat flexibility system really is the ace in the C-MAX hole. A 40-20-40 "tip and tumble" rear seat sees the centre section flip rearwards into the luggage compartment, leaving the remaining two seats to slide diagonally along a runner towards the centre of the car, giving unprecedented levels of space for four. With 100mm of extra legroom and 60mm of additional shoulder room, even extravagantly dimensioned passengers should be able to find space in the back of the C-MAX. Even in the standard three-abreast bench position there's plenty of room, offering 946mm of legroom and 582 litres of luggage compartment space. Remove the rear seats altogether and there's a monstrous 1,692 litres available. One trick Ford did miss was the ability to tumble the front passenger seat forward to a flat position. 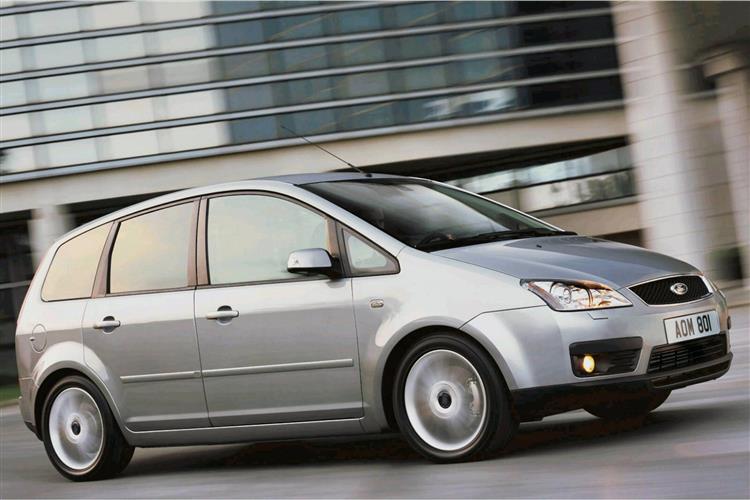