DONE TO A T (some text hidden)

The Touareg is a car that Volkswagen couldn't afford not to build. Missing out on a huge slug of the burgeoning American 'Sports Utility' market didn't sit happily with the top brass at Volkswagen and sharing a good deal of the chassis development budget with Porsche also helped to defray spiralling costs. The result is a car that many feel is better looking than its Porsche cousin, the Cayenne, and which also features a wide range of powerplants. A used Touareg may not be the obvious choice but it's certainly one of the best big bruisers.

The Touareg is full of surprises. First off is the name, a version of the African Toureg tribe (literally 'Free Folk') that somehow gained an extraneous 'a'. Manufactured in Bratislava in Slovakia, the Touareg and the Porsche Cayenne share the same chassis, transmission, AWD system, suspension, windshield, doors, and some sheet metal. Although the two vehicles were largely co-developed, Porsche and Volkswagen parted company two years before the introduction of the pair to work in secret on the remaining aspects of the cars. As a result, the Volkswagen is the more accomplished off road whereas the Porsche, somewhat unsurprisingly, holds an edge on the blacktop. First shown at the Paris Motor Show in September 2002, the Touareg arrived in dealer's showrooms very quickly thereafter, being available in Germany in December 2002 and landing here in the UK in early May 2003. No fewer than four engines were offered; 3.2 and 4.2-litre petrol versions and 2.5 and 5.0-litre TDI diesels. A 3.0-litre V6 TDI engine was added in the autumn of 2004. The imminent arrival of Audi's Q7 in the Summer of 2006 presented Volkswagen with a big problem. The Touareg was going to impinge directly on the Audi's territory and action had to be taken to avoid the two stablemates scuppering each-other's chances. So it was that the Touareg range was revised in Spring 2006 with prices cut by over £2,000. The trim range became standard, SE and Altitude with the latter model offering real road presence via some massive alloys and bodystyling features. The big V8 petrol engine was replaced by a 3.6-litre V6 FSI unit at the same time. The 2007 model year facelift brought the H-shaped chrome grille to the Touareg's nose pulling it in line with the growing band of other Volkswagen products to sport this styling treatment. Revised wing mirrors and light clusters also featured as did a collection of technological innovations, most of them optional. One that was standard is the ABSPlus braking system which can cut braking distances by 20 per cent on muddy surfaces. The range-topping R50 version was launched in early 2008 with a 345bhp version of the V10 TDI engine. Then the 3.0 V6 got a power boost to 237bhp and a BlueMotion model was introduced in mid 2009. Using a 222bhp version of that engine and some other modifications, it achieved 34mpg, not bad for a luxury 4x4.

The philosophy behind the Touareg was to offer three vehicles in one with an eye on the lucrative US market. In a category dominated by the Mercedes M-class, the BMW X5 and the Range Rover, the Touareg needed to be something special. So what's the car like? In a word, big. At 170cm high it's not lacking in road presence. The range-topping V10 TDI sits a couple of centimetres higher still on its air suspension, the other models relying on more conventional steel springs. Unless, that is, you want to hit the options list. The interior styling is pleasantly restrained, the materials quality is class leading and the look and feel is much like the opulent Phaeton. Standard equipment includes electronic climate control, a multifunction computer, ten-speaker CD system, walnut trim, heated and folding door mirrors and a huge airbag count. The 2.5TDI and the V6 models wear a slightly overwhelmed set of 17-inch alloy wheels. Move up to the V8 and there are features such as leather trim, dusk-sensing lights, heated seats, engine compartment lights and chrome finishing on the doors and grille. The V10 TDI is where things again go off the chart. This adds Continuous Damping Control Air Suspension, bi-Xenon lights, remote engine start, memory for your seat belt height, steering column, mirrors and seats and a stereo system with no fewer than eleven speakers. It can be recognised from the outside by its 18-inch wheels, a chrome air intake and front fog lights. And a little badge on the back. The Altitude trim level provided massive 20-inch alloys to go with its bodykit. 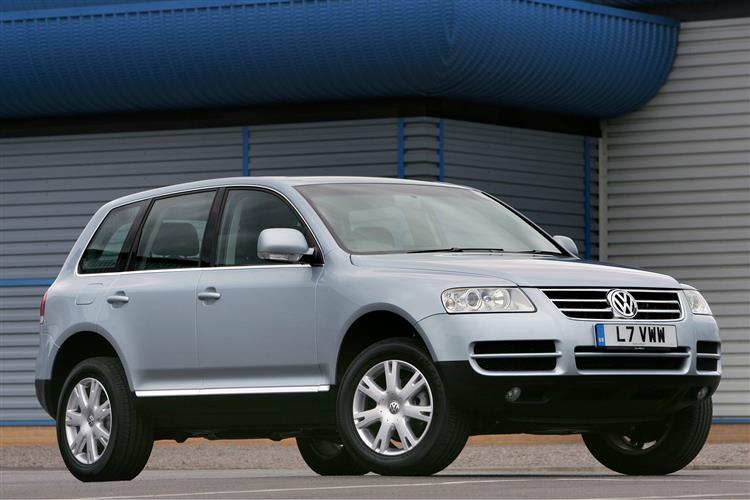