It's sometimes a little frightening how quickly state of the art becomes state of the ark. Back in 1993 Nissan's Micra wowed the automotive world with its cutesy shape and endearing driving characteristics but within a few years it had been soundly overtaken, soldiering on until it was replaced by an all-new model in 2003. This was similarly well received and for a while the press couldn't get enough of the Micra. Nissan had better not leave it ten years until this model gets replaced, however, as the pace of development has quickened significantly. Although the 2003 model Micra is no longer a front page story, it remains one of the more attractive superminis around. With used examples now becoming more widely available, the Micra represents an affordable way to own a modern and attractive supermini.

When it debuted at the 2002 Birmingham Show, few could believe the Micra was a production ready car. The styling was just too reminiscent of a designer's fantasy. Surely when it appeared in showrooms the detailing would be watered down on cost grounds? Fortunately Nissan stuck to their guns and the Micra was as bold as it had first appeared. Four engines were initially available with two body styles - three or five door hatch. The petrol engines comprised a 64bhp 1.0-litre, a 79bhp 1.2, and an 87bhp 1.4-litre unit. There was also a 65bhp 1.5-litre DCi diesel, a unit shared with Renault with a more powerful 82bhp version 1.5-litre DCi following in September 2003. A sporting XS special edition model based on the S with the addition of 15" alloy wheels, a roof spoiler, body coloured electric door mirrors, exclusive dashboard trim and an aluminium gear knob mark appeared in February 2004. The Micra's first facelift arrived in the summer of 2005. At this time the 1.0-litre entry-level engine was axed and a 108bhp 1.6-litre engine was brought in to power the sporty SR model. The facelifted models are distinguishable from their predecessors by a grille with a longer horizontal silver bar in front of a honeycomb mesh. The grille-mounted indicators have clear lenses, there's a curvier front bumper with rubbing strips and an altered under bumper assembly. Improvements were also made in sound proofing and refinement. Shortly afterwards, the C+C convertible model when on sale. The Micra's trim levels were given a shake-up in mid 2006. From this time, the models were renamed Initia, Spirita, Activ and Sport. Only one diesel engine was offered - the dCi 86 and the 160SR performance model was shelved in favour of a modest 110bhp SR Sport replacement. The Active Luxury trim level arrived late in 2006 offering upgraded trim materials for fashion-conscious buyers at the top of the range. Substantial price cuts in the spring of 2007 saw the entry-level Initia come down by a massive £1,500 and other derivatives fall by at least £300. This helped bolster the Micra's value proposition against newer and larger supermini rivals but didn't help the residual values of vehicles already sold. Revisions announced in September 2007 brought a revised chrome grille and wheeled the 160SR's sporty from bumper out to all but the entry-level models. The trim level names were tweaked yet again to Visia, Acenta, Acenta+, Tenka, Active Luxury and 160 SR. All models received an MP3 player connection socket.

The 2003 generation Micra, with all its curves, arcs and bulges turned a definite corner. For a start, it was the first supermini for quite some time which didn't set out to be the most spacious car in its class, instead preferring to concentrate on distinctive styling. It was a sensible tactic. After all, many of us would prefer to drive something that looks a little sassy instead of a boring econobox. Do you really need enough rear headroom to seat a seven-foot ogre when the occupants of the back pew are usually the kids or a few shopping bags? No. The exterior styling is remarkable. The domed roof is 100mm higher than the old Micra and the width was also increased a tad, but the overall length is shorter but with a longer wheelbase. It is packaged more efficiently than the old car, although not in the same league as rivals like the Honda Jazz. Nevertheless, the Micra manages the feat of making Honda's baby look pretty dull. The flanks have a bevelled waistline that runs from front to rear wing, giving the styling an integrated, cohesive look. The headlights are the key design touch, looking for all the world as if they'd illuminate skywards like twin searchlights. Standard equipment includes anti lock brakes with electronic brakeforce distribution, remote central locking, front electric windows, twin airbags, an electric tailgate release and a CD-based stereo. Nissan, it seems, have twigged that cassette sales have disappeared down the gurgler. Move up to a 1.2-litre and the opening variant is an S specification car which adds side airbags, a sliding rear seat with 60/40 split and driver's seat height adjustment amongst other features. Trade up to a Micra SE and the car starts getting pretty tricksy. A drive computer, an intelligent key, automatic rain sensing wipers, air conditioning and body coloured electric door mirrors make life easier, whilst the leather trim on the steering wheel, seat bolsters and bigger wheels are welcome touches. There's a big multifunctional glove box and a 10-litre storage area under the passenger seat for hiding valuables too. The penultimate Micra model is the SX, which adds dark tinted headlamps, front fog lights, electronic climate control with 'ivory' controls, 15-inch alloy wheels, a roof spoiler and swankier trim. For those after the ultimate Micra, nothing but the SVE will do, featuring as it does ultrasonic parking sensors. The SR features various sporty enhancements including spoilers and larger wheels. Opt for one of the top trim levels and the intelligent key will have your friends scratching their heads. This unlocks the car when you pass within 80cm of it, whereupon you'll merely need to press a button on the door handle, drop into the driver's seat and twist a knob where the ignition barrel would normally be to fire the Micra up. No more fumbling for keys, working out which button is 'unlock' in the dark or stabbing yourself in the leg with the key blade. Whichever Micra you opt for, expect to find easy access front and rear with ample legroom, if a notable premium on headroom at the back. 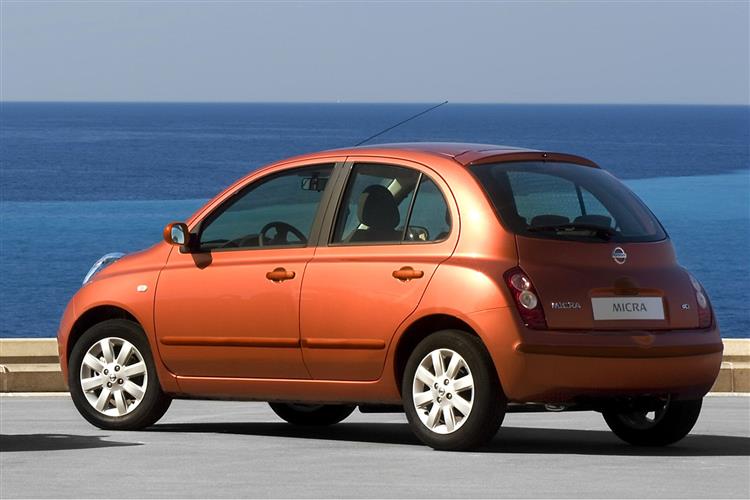