Taking a massive leap in complexity, build quality and cost, the third generation Toyota RAV4 moved away from the rather crude but fun image of the first generation car and middle of the road feel of the second. Opinions differ on whether it has moved price-wise beyond what the market will bear and steady rather than storming initial sales would seem to partly bear this assertion out. Up against a revitalised Honda CR-V and Land Rover Freelander, Toyota found conquest sales hard. As a used buy, it's typically Toyota with great service from franchised dealers and as close to guaranteed reliability as it's possible to get.

The third generation Toyota RAV4 was wheeled out to a broadly appreciative press at the 2005 Frankfurt Motor Show and first impressions suggested that Toyota had retained many of the core strengths of the existing RAV4 while adopting many of the characteristics that made the Nissan X-Trail such a success. When it comes to pan European sales, Toyota yields to nobody, but the X-Trail had, for a couple of years, been recognised as the market leader on these shores. Toyota isn't a company to let a slight like that ride and the MK3 RAV4 was bigger, beefier and a whole lot smarter than its predecessor. Before the advent of the RAV4, small 4x4s were rather unlovely items of the 'tumble jeep' persuasion. Show them a corner and they'd show you the sort of low speed aerobatics that would have a Red Arrows pilot reaching for the barf bag. The MK1 RAV4 changed all that. With a taut ride and peppy engines, here was a car that was designed around the realisation that at least 90% of its life would be spent on-road. Dubbed the 'GTi of 4x4s', the RAV4 soon became the hot ticket in town. That is until the rest of the market got with the programme and developed some seriously capable rivals like the Honda CR-V and the Land Rover Freelander. The second generation RAV4 did extremely well but it seems Toyota wanted more. In an attempt to leverage its quality reputation, the third generation RAV4 sailed upmarket. It's what you'd expect to find if Lexus ever built a small 4x4. In mid-2009 sweeping changes were made to the RAV4 engine range and a mild facelift brought tweaks to the grille, bumpers and lights. Toyota's Optimal Drive technology was applied to the two engines that remained with improvements to power, torque, economy and emissions. Both the 2.0-litre petrol and 2.2-litre diesel units were available with automatic transmission and an entry-level 2.0-litre model with 2WD was incorporated. Equipment levels were enhanced across a less complex trim level range of XT-R and SR models.

What You Getword count: 414

We've seen that with each successive iteration, the RAV4 got bigger and better equipped. The third generation model represented the most radical change yet. Cute and chunky was replaced with bold and aggressive. The frontal styling is still recognisably RAV4 but move aft and the new vehicle is a whole lot more angular and a good deal more spacious. There was never a three-door version, Toyota reasoning that smaller leisure-oriented models weren't making the numbers in the UK market. Break-out the tape measure and you'll find the third-generation RAV4 is a whopping 145mm longer and a hefty 80mm wider. Couple that with smarter packaging and you end up with a car that's way bigger on the inside, offering some 25 per cent more luggage space. If you're worried that this will make it a nightmare to park, be reassured by the fact that it's still shorter than something like a Honda CR-V or a Land Rover Freelander. The cabin is smartly-styled with an unusually curvaceous fascia that's quite unlike any other production car in its execution. While the main instruments are quite conventional, the centre console features a twin-tiered design with metallic inserts and a circular theme for the minor controls. Higher quality plastics are used than is the compact 4x4 norm and a start button is included. Three mainstream trim levels are offered - XT3, XT4 and plush XT5 - and all variants get a compact disc stereo, alloy wheels, air conditioning, plus no fewer than seven airbags including curtain and driver's knee bags. The range-topping XT5 also comes furnished with leather upholstery, climate controlled air conditioning and satellite navigation. The RAV4 has long had a reputation for being impeccably built and this model bolsters that reputation with class-topping equipment levels. Rear seats that fold flat to the floor with one pull of a lever are one reason why the RAV4's load capacity has risen so dramatically and it also helps that the rear seats can be slid backwards and forwards over a range of 165mm, optimising either luggage space or rear passenger leg room. The seat folding action is particularly slick. Whereas some rivals may also claim flat folding rear seats, the reality is that you will often have to spend time dismantling the head restraints or risk a hernia from flipping seat bases up before the operation can be completed. There's none of that palaver in the RAV4, a one-handed operation seeing the seat vanish flush with the load bay floor. 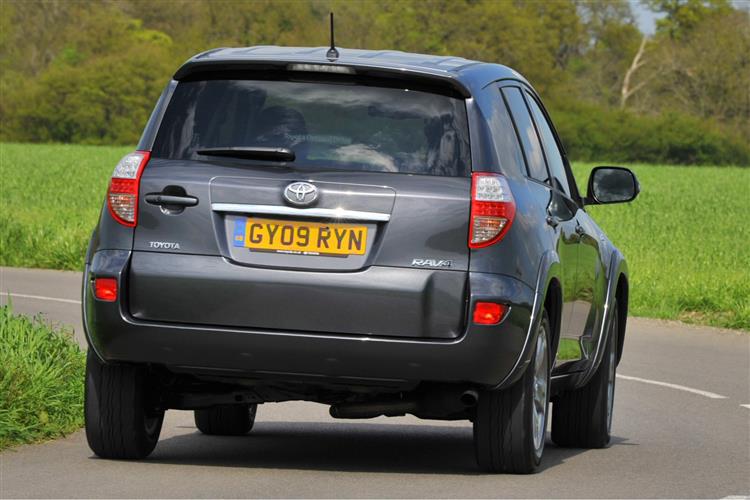