Just six years after BMW slam dunked all of its direct opposition with the 400bhp V8-engined M5, it was back, this time with a performer of an entirely different magnitude. What was a headline power output in 1999 failed to raise an eyebrow in 2005 and with a 507bhp V10 engine under its bonnet, the M5 once again lit the blue touch paper in an ever-escalating power game. But while it might have had the brute force to impress as a new car, does the E60 generation BMW M5 still cut the mustard as a used proposition?

The E39 generation M5 built from 1999 to 2003 was a tough act to follow. Beautifully balanced, eye-wateringly rapid and flattering to even the most ham-fisted driver, it still elicits wistful sighs from besotted petrolheads the world over. The E60 model was tougher to love. Technologically dense, intimidatingly complex and challengingly styled, the later M5 was nevertheless something that caused jaw-slackening astonishment, if not instant affection. The proposition was initially very simple; one engine, one trim level, one body style, one transmission and very little in the way of options. At over £60,000 it wasn't cheap but compared to vehicles with equivalent performance it was a bargain. Sales were initially a little slow but as the M5's shape began to mature nicely, orders rolled in. The promise of a manual gearbox kept many hooked but it was never launched in the UK, the Americans (of all markets) getting it instead, joined with non-switchable traction and stability control. When changes did come, in 2007, they were very subtle indeed. The seven-speed sequential gearchange was modified slightly to offer some much-needed smoothness in full automatic mode and the front spoiler was minutely restyled. The biggest news was the introduction of a rather handsome M5 Touring variant, the first M5 load lugger imported to the UK.

It's unlikely you'll mistake the M5 for one of its humbler brethren, even if your retinas struggle to resolve an image of extremely fast moving subjects. Modified front and rear aprons and side sills give it a subtly aggressive mien and subtle air ducts puncture the front wings. The big giveaway are the monster 19-inch wheels housed within the subtly flared wheel arches. These deeply dished ten-spoked wheels are unique to the M5 and are finished in Chrome Shadow. The four signature tailpipes at the rear also give a distinct clue as to what has just blown you into the weeds. Power is transmitted to the rear wheels via the world's first production seven-speed sequential gearbox. The Drivelogic system changes gears around 20 per cent faster than the somewhat unsatisfying earlier iteration of the SMG gearbox as fitted to the M3. Eleven different change patterns are offered, six of which allow the drive to alter the speed and response characteristics of the gearchange in manual mode and five that govern the rules of the automatic mode. The sixth pattern in manual is reserved for the Launch Control function, giving the likes of you and I the opportunity to replicate BMW test drivers' 0-60 times. In theory at least. A revised DSC stability control system has also been developed specifically for the M5. This features three settings, the default mode offering the full safety net of electronic features. An M Dynamic mode allows the enthusiast driver to let it hang out a little, the system allowing a little sideslip and opposite lockery. For the genuine hooligan and determined tyre fryer, a third press of the button disables the system completely although if you're confident enough to fling Munich's finest sideways at the scenery, I take my hat off to you. If you think that's impressive, try the Mdrive button mounted on the steering wheel. This button offers a one-touch function that changes the settings of the car to a predetermined 'sporting' setting. Using the iDrive control knob, the owner can select the preferred SMG gearbox setting, electronic damper control and DSC modes and, if specified, can even boost the amount of support from the side bolsters of Active Seat Control. Therefore you can roll up to your favourite corner with the M5 in its most comfortable setting, hit the Mdrive button and the car will transform into something a whole lot more focused. Like all the best ideas, it makes one wonder why nobody had thought of it before. 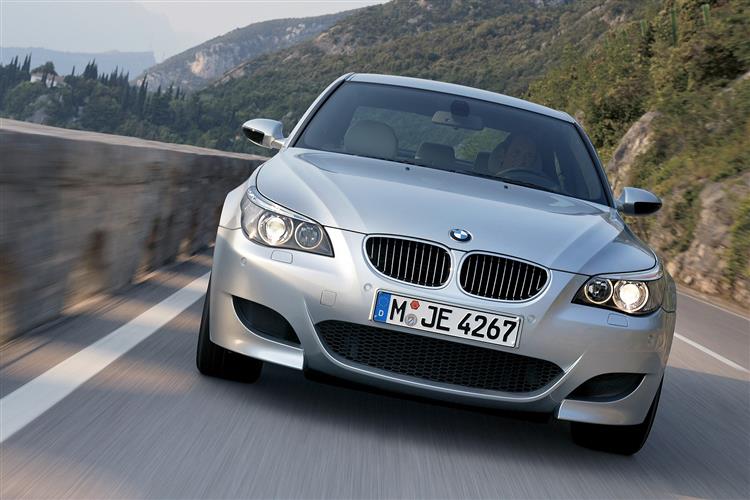