There are lots of Mercedes-Benz coupes to choose from but many are on the wrong side of huge and require the financial means of a Saudi oil magnate to run. The CLC is different, a Mercedes-Benz coupe of manageable size and modest cost. It's popular but in plentiful supply on the used market, so should people in the hunt for a compact coupe forsake the other options and give it a go?

When its German rivals began to expand beyond their executive and luxury car heartlands and started dipping their toes into the small car sector, Mercedes-Benz took a divergent path with a two-pronged attack. With its tall shape and MPV overtones, the Mercedes A-Class never looked like a direct rival to the Audi A3 and BMW 1 Series which had the feel of conventional hatchbacks. With the A-Class positioned as a plush but family-friendly option, Mercedes then developed the C-Class Sports Coupe to bring a more dynamic flavour. The Sports Coupe was a shortened, three-door version of the C-Class that was being sold at the time with the same rear-wheel-drive layout, suspension and steering. Launched in 2001, It proved popular, with the stylish design and the three-pointed star cutting a lot of ice with image conscious buyers. By 2008, however, the C-Class that formed the basis of the Sports Coupe had been replaced by an all-new model. A-Class sales weren't what they could have been and BMW and Audi seemed to be carving up the small premium car market between them. In an attempt to keep the Sports Coupe relevant, it was facelifted and reinvented as the CLC. With a new compact car platform some way off, the CLC was essentially a stop-gap measure. It's similarities to the Sports Coupe were more than a different grille and headlamps could mask but the tidy design still held water. The CLC was launched with the engines from the Sport Coupe carried over which meant 1.8-litre supercharged Kompresser units at the base of the range below a couple of V6 petrols and the 2.1-litre CDI diesels. Trim levels were a choice of SE and Sport. The thirsty V6 petrol models were dropped from the range by 2010 and an entry-level 160 BlueEfficiency model arrived.

What You Getword count: 281

Mercedes was at pains to dispel the impression that the CLC was just a C-Class Sports Coupe with a facelift. The Stuttgart company claimed over 1,100 component changes but count every press stud, grommet and washer and you can amass 1,100 new parts rather rapidly. It certainly looks like the old car from the cabin, with much the same dashboard architecture, albeit garnished with uprated infotainment systems, seats and steering wheel. The exterior retained much the same silhouette but looks a lot more modern in its detailing. The front end apes that of the C-Class generation that arrived in 2007, adding projection beam headlights and that Mercedes coupe touchstone, the big chromed three-pointed star in the centre of the grille. The back end was also tidied up to good effect, with a set of slimline LED tail lights. Open the hatch and you'll find a variable luggage compartment with a capacity of up to 1,110 litres, proving that this coupe has a practical edge as well but the rear seats aren't all that spacious. The overall effect was of a more mature, dignified car that echoed the latest Mercedes design language very smartly. Build quality is notably tighter than on the C-Class Sports Coupe, with better quality interior finishes and superior panel fit. The trim levels you'll encounter are the SE and the Sport but buyers had the option of whether to specify the panoramic glass roof. Equipment levels are reasonably generous and include parking sensors, sports suspension, sports seats, electric windows, climate control, ESP stability control and a clutch of airbags. The Sport model adds speed sensitive power steering, lowered suspension, a leather sports steering wheel and bigger alloy wheels. 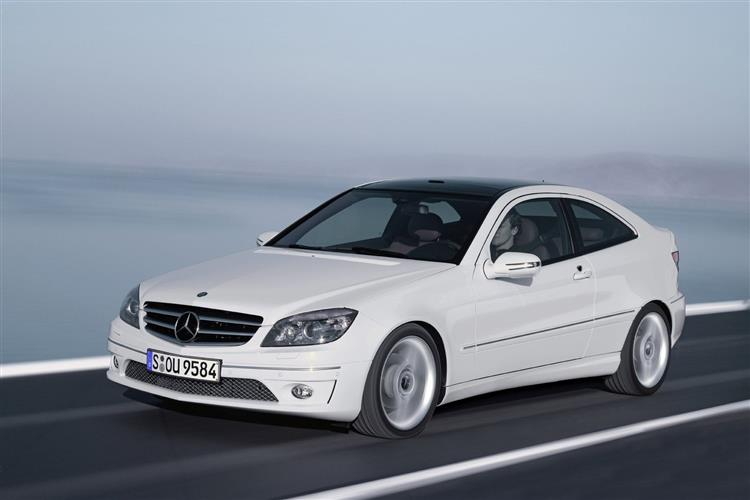