Ford's 2005 Focus had one of the toughest tasks faced by any family car. It had to reprise the success of its ground-breaking predecessor. Not only that, but it was faced with a whole host of rivals who had taken the previous generation Focus apart, copied its technology, employed its development engineers and done all they could to try to one-up Ford. While it's true that the 2005 model year Focus no longer enjoys the huge gulf in capability over its rivals that its predecessor could indulge in, it's still one of the very finest family hatches around and, from a driver's perspective, is still the one to have. The styling may have become a little lower key but the Focus has, in most of the key areas that count, become a markedly better car. Used examples are now appearing in meaningful numbers and make very decent buys.

October 1998 was the point that the whole family hatch market changed. Until that point we'd been happy with cars like Citroen ZXs, Ford Escorts and Peugeot 306s. The Focus changed all that, at a sweep making everything else look dated, clumsy and silly. Through its various developments, the Focus retained its position as the UK's top selling family hatch until it was finally replaced in January 2005 with this all-new version. A good deal more conventional in outward appearance to the striking original, some saw this as a sign that Ford had lost their edge when it came to product development, but a short spell behind the wheel would dispel this myth for good. Despite rivals like the Volkswagen Golf and Vauxhall Astra closing the gap, the Focus was still the best value package in its class and sales soon ramped up to very encouraging levels. An estate version followed within a couple of weeks of the three and five-door hatches appearing and in March 2005, a very handsome four door saloon version appeared, erasing memories of the rather awkward-looking first generation Focus saloon. Performance fans were sated in late 2005 with the launch of the 2.5-litre ST models, powered by a 220bhp Volvo-sourced turbocharged five cylinder engine. The Focus was facelifted in the latter stages of 2007 with the new front end incorporating the trapezoidal grille and fog lights that had contributed to success of the Mondeo's exterior design. The engine line-up remained largely unaltered and ESP stability control became standard.

What You Getword count: 323

The latest Focus, offered in three or five-door hatch form or as either a saloon or an estate, has remained affordable, capable and desirable. Taking its cue from the C-MAX mini-MPV, the Focus interior looks reassuringly expensive. The branded Sony stereo, the metallic detailing on the centre console, instruments and chunky-rimmed steering wheel, the soft-touch fascia and the silicon-damped hinges all smack of executive class investment. Developers have worked to ensure that the feel of the switches - a push button in the door, for example - should have the same sound, feel and travel as a push button in the centre console or the sunroof control and that rotary switches retain the same feel whether they marshal mechanical or electrical applications. The riot of crazily intersecting hard plastics that was the first generation Focus interior has been replaced by something far more assured, more mature - a word Ford repeat frequently in their release literature. Ford were the first of the major manufacturers to realise that people were growing in size - both out and up - and designed the original Focus to suit drivers of all sizes with wider opening doors and more headroom than the class norm. The latest Focus expands on this theme, offering an optional electrically adjustable pedal set. The multi-adjustable steering column helps in ensuring a comfortable driving position and Ford have integrated a number of practical aspects from the C-MAX mini-MPV including a glove box big enough to house a 1.5-litre bottle, a sunglasses holder, a dash-top cubby and class-leading luggage space. Although it seems hard to believe given that almost coupe-like silhouette, the MK2 Focus design actually improves the rear seat accommodation and luggage space. This is partly due to Ford increasing the length of the rear overhang slightly to give a hefty 385-litre carrying capacity. The compact control-blade rear suspension helps here, as the load bay is completely flat and unencumbered by suspension intrusion. 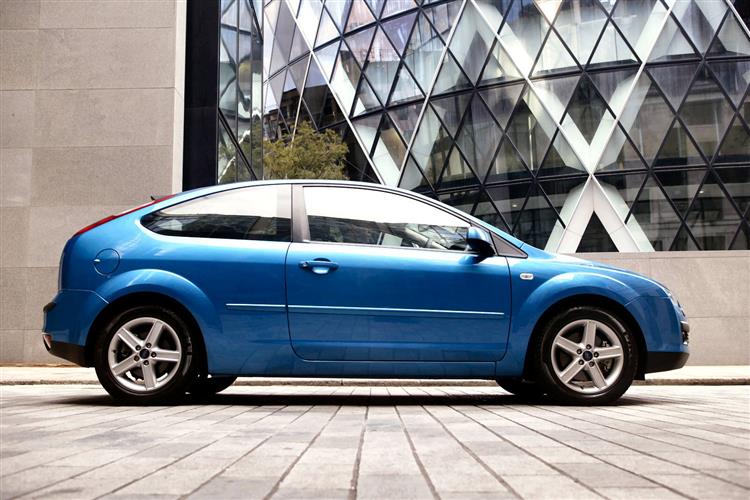