In the UK we really appreciate the art of putting rather too big an engine into an everyday shopping hatch. At their best, the resulting hot hatchbacks give you sportscar performance in a practical package that doesn't cost the earth, so what's not to like? In its day, the Vauxhall Astra VXR was one of the most powerful hot hatches you could buy, its 237bhp instantly giving it massive kudos with the target market. As well as being powerful, it looked powerful with its pumped-up modifications to the coupe-like silhouette of the standard three-door Astra. The key ingredients were there but how good was the VXR and should you consider a used one?

Vauxhall used to badge its performance cars GSi. There were some quick models with SRi stamped on the tailgate though. Oh yes, and GTE always spelt big fun too while many SXi models came with a mild dynamic flavour. What Vauxhall needed was a recognisable performance brand that customers could get a solid handle on. Inevitably, it settled on another three-letter combo - VXR. Vauxhall chose to develop VXR as its flagship sporting brand much as Volkswagen has GTI and Honda has Type-R. It forged a perceptual link with its VX Racing motorsport team in the process, underlining the connection between the Vauxhalls people could buy and the ones they saw on the track. First off the production line was the VXR version of the VX220 sportscar. Then came the Monaro VXR, a muscular V8 coupe, and the Astra VXR in 2005. All of the VXR models offered big power outputs and the Astra VXR was no exception. At the time that Vauxhall launched the car, Honda was offering a Civic Type-R with 197bhp, the same output as the Volkswagen Golf GTI of the day, and Renault's Megane Renaultsport had 222bhp. The Astra topped the lot of them with 237bhp. To beat that kind of power in a hatchback, buyers needed to look to the Audi A3 3.2 V6 (247bhp) or a BMW 130i (261bhp). These cars were a lot more expensive and, tellingly, they were also four and rear wheel-drive respectively. The only front-wheel-drive hatch with more power than the Astra was the Alfa Romeo 147 GTA which, with a heavy front-mounted V6 engine trying to put 250bhp through its front wheels, was a major challenge to control under full throttle. The Astra VXR wasn't quite that wild, but its front wheels still struggled to deal with all those braked horses, hence its rather mixed press reviews. Perhaps because of this, none of the various special edition VXR versions - which included the VX Racing Edition, the VXR Arctic and the VXR Nurburgring - dared to increase the output of the basic car's 2.0-litre turbocharged engine. Vauxhall facelifted the Astra range early in 2007 with sharper-looking front and rear lights, a revised front bumper and more chrome splashed about the grille. Three-door Sport Hatch models like the VXR also got a honeycomb front grille. The VXR's tenure ended in 2010 with the arrival of an all new Astra.

What You Getword count: 232

From the outside, the Astra VXR is distinguished from ordinary Astra Sport Hatch models by 18-inch alloys (19-inchers were optional), a body-coloured V-grille, ground-hugging side skirts, a rear spoiler and revised bumper assemblies, along with neat detail touches such as its Arden Blue front and rear brake callipers and VXR badges. Inside, there are Recaro seats, revised instruments incorporating VXR logos, a three-spoke sports steering wheel, carbon-effect inserts on the doors and facia and an alloy gearknob, also with VXR detailing. The coupe-like shape of the Astra Sport Hatch (the name Vauxhall gave to the three-door cars) really lent itself to hot hatch duties. In the early days, the VXR certainly had the most dynamic silhouette of any of its rivals. The raked roofline looks as if it'll have taller rear seat passengers entering the number of their chiropractor into the speed-dial but it isn't quite that bad. The rear seat is a conventional three-abreast bench with a practical 60:40 split system offered as standard or the alternative 40:20:40 layout available as an option. The VXR's Recaro sports front seats do impinge on rear legroom however. Luggage room is slightly hampered by that curving roofline but you still get 300 litres in there. Besides, it's doubtful that too many customers are going to complain about the height of the rear loading lip after they've unleashed all 237bhp down a motorway slip road. 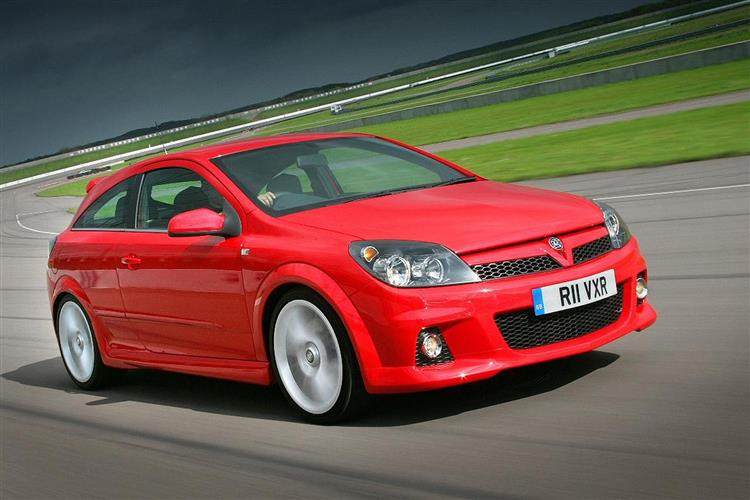