The Volvo S60 marked a sea change for the Swedish company. Smaller Volvos had never really cut it in the eyes of British customers - being viewed with the same suspicion afforded large Italian saloons, peripatetic driveway layers, Eastern European bicycles and 99p all-you-can-eat Cantonese buffets. The S60 was the first compact Volvo to seriously threaten the German establishment - a tough nut to crack by any means. As a used proposition, the S60 looks to offer many of Volvo's traditionally sensible values whilst injecting a dash of Scandinavian style into the equation. Should a nearly-new Mercedes C-class, Audi A4 or BMW 3 Series fail to appeal, the S60 should most definitely be on your shortlist.

The S60 arrived in the UK in October 2000 and to all intents and purposes replicated the success of its bigger sibling, the S80, only in a more compact form. The same rounded hips and the bluff grille hinted at a Volvo design theme that looked to have some legs, and the car was warmly, if not rapturously, received by most who sampled it. Certainly the lines suited the smaller car superbly and customers were drawn to a range that initially consisted of a base 180bhp 2.0-litre turbo, a 200bhp 2.4-litre turbo and the mighty 250bhp 2.3-litre turbocharged T5. The D5 diesel version of the 2.4-litre engine arrived in 2001 alongside a dual-fuel version of this engine, at a swoop making the S60 one of the most economical cars in the compact executive class. All models are available in either S or SE trim. In 2003 Volvo launched a 300bhp version, the S60 R. With all wheel drive and a turbocharged five cylinder 2.5-litre engine, the R was capable of hitting 60mph in 5.5 seconds and run onto a top speed of 155mph. Shortly thereafter, Volvo dropped the 200bhp 2.4T engine in favour of the 210bhp 2.5T and made a few minor detail changes to the car. The fascia were now finished in charcoal grey and there were some more aerodynamic mirrors that cut down on wind noise at speed. Changes brought in during the summer of 2006 aimed to make the S60 a sportier proposition. The suspension was heavily revised while alterations to the grille and bumpers gave a more aggressive look. Spot these cars by the indicators integrated into the wing mirrors. By this time, diesel buyers had a choice of the 163bhp 2.4D or the 185bhp D5 unit.

This is an all-out sports saloon, aimed squarely at prestige compact executive rivals like BMW's 3 Series, Mercedes' C-class and the Lexus IS200. British designer Peter Horbury's brief was to create a saloon that looked like a Coupe front and rear - in his words "a Ferrari you could get in and out of" - and the result is one that should sit snugly in the boardroom carpark amongst the massed ranks of Mercedes', BMWs and Audis. It's unmistakably a Volvo: check the C70-style rear three-quarter view, the V70 front end and the distinctive S80 'catwalk' shoulders which run the entire length of the car. Yet somehow, there's a sense of style and spirit we've not seen from Gothenburg in the past. Much the same is also true inside, though the cabin draws heavily on the approach already used in the S80 and V70 models. Here however, there's a sportier feel, courtesy of the three-spoke leather-covered wheel, the bucket seats and, on T5 manual models, a 'spaceball' gearlever surround (an aluminium dome that pivots beneath the stick). Probably more significant than all that however, is the amount of space you'll find in the rear, thanks to a 'cab-forward' design which has freed up more space for those on the back seat. Three people will fit but Volvo expects many customers to opt for a special two-seater rear bench with more sculpted, supportive seating for a couple of adults. Safety of course, remained uppermost in the designers' minds throughout development: Volvo may have ditched many of its marque values in recent years but it can't afford to lose this one. Hence the inclusion on every model of dual-stage airbags for front driver and passenger, SIPS (the company's patented Side Impact Protections System) with side airbags, WHIPS (the Whiplash Protection System), an inflatable curtain to save your head from smashing against the side glass and five three-point seatbelts. 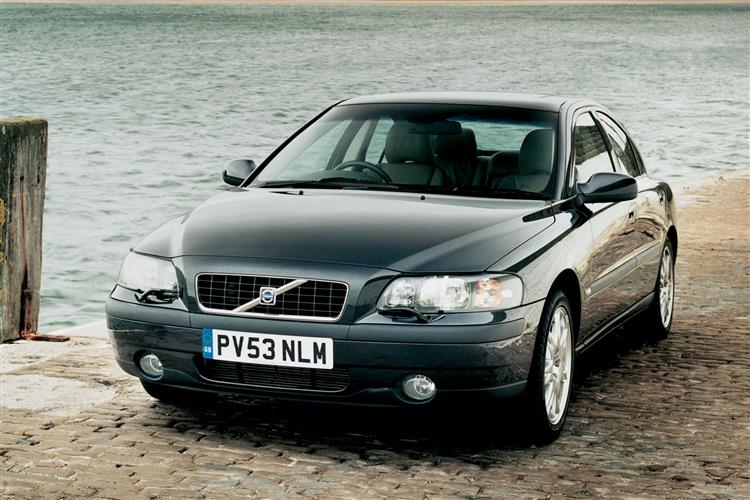