Amid all the brouhaha and awards bestowed upon the Volkswagen Golf Mk V, the launch of the Golf Plus escaped some people. Those that did pay attention can be excused for being a little confused about this model's raison d'etre. Sitting on the same wheelbase as the Golf and being no longer or wider, the Golf Plus isn't at first an easy car to get to grips with. Family motorists who sample one may well appreciate its charms, however, and used models are, if anything, slightly undervalued. This means that if you want all the practical qualities of the Golf and a little bit more, it needn't cost the earth. Here's what to look for.

The Volkswagen Golf Plus landed in UK dealerships in Spring 2005 to almost universal apathy, the standard hatchback model outselling it by a ratio of more than twenty to one. The Plus majored on the utility end of the engine line up, kicking off with the 80PS 1.4-litre petrol unit and a more advanced 115bhp 1.6-litre FSI unit. The diesel options were 90 or 105bhp versions of the 1.9TDI engine or a more modern 140bhp 2.0-litre TDI. Realising that perhaps the range could use the benefit of a little extra pizzazz, Volkswagen subsequently added the 150bhp 2.0-litre FSI engine before replacing that in summer 2006 with the 1.4-litre TSI twincharge engine, fitted with both turbocharger and supercharger. To complicate matters, Volkswagen introduced a second 1.4 TSI engine towards the end of 2007. This 120bhp unit lacked the supercharger of the other 1.4 TSI engine, making do with a turbocharger and it replaced the 1.6 FSI unit. The BlueMotion derivative arrived around the same time with aerodynamic tweaks and other modifications to enhance fuel economy.

What You Getword count: 400

So let's look a little closer at the thinking behind this car. Statistics show that we're close behind the Dutch as the second tallest nation on earth. We're bigger than all the Scandinavians and the Germans. The Americans are growing out rather than up, but at current estimates, we'd still need at least a century or so before the average British male's head started to brush the plush head lining of the Volkswagen Golf Plus. Even given Volkswagen's build integrity, it's tough to see too many Golf Pluses plying the roads in the early 22nd century. Where is the benefit in having all this extra height? It increases the frontal area of the car and is rarely beneficial when loading. Volkswagen had a ready answer to this, pointing to the fact that overall load space went up to 505 litres, but how often have you loaded your hatch brim full to the ceiling? It's doubtless beneficial for awkwardly sized items like bicycles but the additional carrying capacity of the Golf Plus should be taken with a pinch of salt. Where it does score real practicality benefits is in terms of its seating arrangement. Thankfully, Volkswagen didn't try to squeeze seven seats into this vehicle, positioning it (as its name suggests) between Golf and Touran but a good deal closer to Golf. The rear seats can be shifted fore and aft by 160mm and folded by means of a system whereby they are automatically lowered when folded down. This results in a virtually level load space, making the Golf Plus a very practical option indeed. The seats do the usual 60:40 split and the middle seat can also be folded down to form a drinks table. Additional stowage spaces around the cabin and a double height boot floor are nice touches but once again, the Golf Plus generated more questions than answers. All of these features could easily have been engineered into the standard Golf. In many respects Volkswagen ran into the same sort of customer resistance Ford faced when launching the Fusion, a car that sat on Fiesta underpinnings but was a little taller, uglier, noisier and less adept in its handling. Volkswagen claimed the Golf Plus was likely to attract buyers without families, or possibly with small families, who require more room and flexibility than the traditional hatchback could offer. The sales figures haven't yet borne this assertion out. 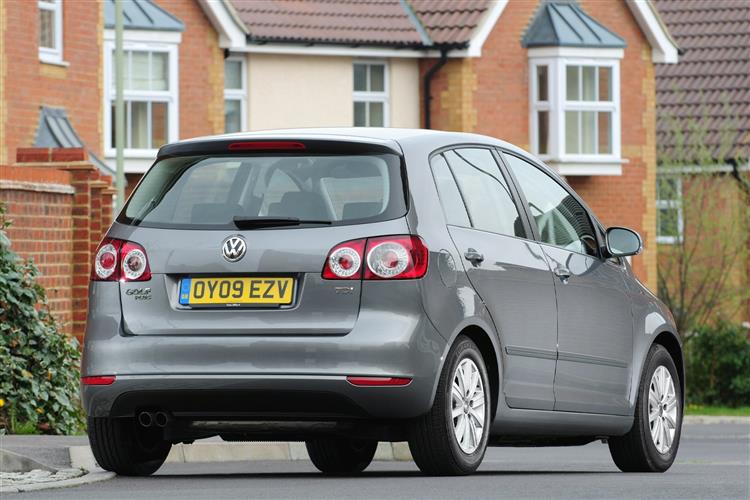