GIVE ME FIVE (some text hidden)

The Volkswagen Golf Mk V represents an interesting case study in product development. Many cars grow bigger and heavier over successive iterations until a critical point is reached, with the manufacturer asking themselves exactly what sort of car they are producing. This tends to result in a reappraisal and, more often than not, a smarter, better car. There are countless examples of this occurring and with the Golf, that moment came in February 2004 with the launch of the Mk V model. Used examples are now filtering onto the market, giving those who can afford it the opportunity discover what all the fuss is about.

It seems almost unbelievable that Volkswagen have built over 22 million Golfs since the Mk 1 was launched in 1974, which means that every 25 seconds for the past 29 years, a Golf has been rolling off a production line. The Golf Mk IV was a very successful model for Volkswagen, commanding a 21 per cent share in the family hatch market across Europe and its final year sales were the strongest to date. Recognising the importance of Golf sales (the model accounts for over a third of Volkswagen's worldwide sales and nearly half of European figures), Volkswagen couldn't afford to wait for the Mk IV to become stale and haggard, replacing it at the top of its game with a fresh new model. The Mk V is built in Wolfsburg, the spiritual home of Volkswagen. Originally named KdF-Stadt, (Strength-through-Joy-Town) in the 1930s to build the KdF-Wagen, the town was renamed Wolfsburg after the war, temporarily changing all of its road signs to read 'Golfsburg' at the launch of the Mk V. Other Golf production facilities exist in lower Saxony, Belgium and South Africa. Upon launch, the Golf MKV range consisted of a basic 1.4-litre petrol engines, plus 1.4, 1.6 and 2.0-litre versions of the FSI (fuel stratified injection) petrol powerplant. A turbocharged 197bhp version of the 2.0-litre engine was added shortly thereafter to reprise the seminal GTi badge. Diesels included the rather agricultural 2.0-litre SDI, as well as a 103bhp 1.9 TDI and the far more sophisticated 138bhp 2.0-litre TDI unit. The Volkswagen Golf Plus, a slightly bigger family-oriented Golf variant, was also announced in Spring 2005 around the same time that the 4MOTION 4x4 variants went on sale. The range topping R32 derivative arrived in late 2005. The SE trim level was renamed Match and given a specification boost in towards the end of 2006. The 1.4-litre Twincharge engines were introduced too producing 140 or 170bhp from a 1.4-litre petrol engine with turbo and supercharging. A 1.4-litre TSI turbocharged engine arrived in 2007 with 122bhp and the economical BlueMotion derivatives made an appearance around the same period..

The styling is evolutionary rather than revolutionary insofar as most will know it's a Golf they're looking at without recourse to clocking the badge on its rump. As company boss Bernd Pischetsrieder explains: "The only mistake the Golf can make is to stop being a Golf." There's little doubt that the fourth generation Golf was - and is - a handsome piece of car design, but the fifth generation marks probably the biggest evolution in the Golf's design language since the Mk 2 became the chubbier Mk 3. Everything is just that little bit curvier, sleeker and more elegant. It runs on the same platform as the latest Audi A3 and Volkswagen Touran models and this means that the sophisticated suspension system has a huge scope for tuning from the most affordable city runabouts to hardcore sports versions. The interior keeps the Golf at the top of the family hatch tree. It uses a fascia design reminiscent of the Phaeton luxury saloon although the centre console is lifted from the Touran mini-MPV. With the possible exception of its pricier Volkswagen Group cousin, the Audi A3, the cabin has the beating of anything out there as regards ambience. The interior features soft-feel slush-moulded plastics, subtle use of chrome, fabric-covered A-pillars plus blue instrument backlighting with red needles, a signature of the fourth generation model. Some of the lower dash plastics and minor switches feel a little cheap but when balanced against the huge improvements in interior space, it's not too big a price to pay. The latest Golf also sets new standards by introducing 2Zone climate control and four-way lumbar support within the line-up. In addition, ESP (Electronic Stabilisation Programme), no fewer than six airbags as well as anti-lock brakes are fitted as standard throughout the range. Big car features such as automatic activation of headlamps and wipers are built into the car's electronics. 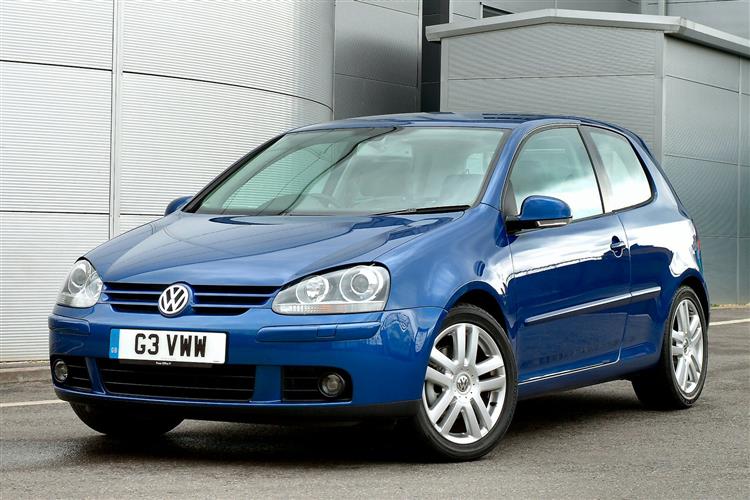