The Vauxhall Vectra was a car designed for its purpose in life almost too well. Vauxhall had identified that the target market were almost all company reps looking for a fast, quiet, smooth riding and inexpensive medium range car and built a very good motorway car. The press hated it and, image-wise at least, the car never really recovered from its initial critical blasting. Its successor, launched in 2002, may have looked a good deal more radical, but much of the mechanics and the feel was largely the same. Again, it was a car superbly focused on its task but which never really tugged at the heart strings. Can a used Vectra make an appealing choice for the private buyer? If you choose wisely, yes it can.

"What you're looking at here is a phenomenon" proclaimed actor Ed Harris in the advertisement for the Vectra. " This was a car that possessed an Interactive Driving System that set 'new rules for ride and handling'. New rules? A strange choice of phraseology perhaps designed to mask the fact that the Vectra in fact broke no new ground. While the hype machine was in overdrive, the fact was that the latest Vectra, although undoubtedly handsome, well equipped and generally pleasant to drive followed in the same vein as its predecessor. With a range of powerplants largely carried over from the previous generation car (itself no bad thing), the Vectra actually offered a very decent blend of new features, new styling and tried and tested mechanicals. Despite the mauling the old car received in the popular press, buyers were able to see through the hyperbole and the car sold in respectable numbers and the latest Vectra is no exception. Vauxhall added to the range with new engines including the 2.0-litre Turbo powerplant and the long awaited Vectra estate variant debuted in summer 2003. A long-wheelbase spin-off of the Vectra platform was also developed in the shapely form of the Signum, a car that aimed to bridge the gap between mainstream models and cash cow prestige marques. 120 and 150bhp 1.9-litre CDTi diesel engines arrived in spring 2004 to join the existing 3.0-litre CDTi in forming the Vectra's common-rail contingent. A facelifted version of the Vectra was announced in the summer of 2005. It saw the car inherit the rakish frontal styling cues previously seen on the mkV Astra hatchback. Handling sharpness was also improved and the range-topping 3.2-litre V6 powerplant was replaced by a 2.8-litre turbocharged V6 with 227bhp. That engine was later boosted to 253bhp and installed in the VXR performance model. In the early part of 2006, the 120bhp 1.8-litre petrol engine that propped up the range was replaced by a more advanced 1.8-litre unit packing 140bhp. The newcomer offered better economy and performance at the same price. From the autumn of 2006 the VXR performance model received an upgrade to 276bhp.

What You Getword count: 375

A key area that Vauxhall needed to address with the Vectra was the whole driver environment. Times had changed. Smithers from Field Sales no longer automatically received a new Vectra every three years whether he liked it or not. Company car taxation schemes have moved on and fleet users are increasingly choosing their own cars. In order to compete, medium range models like this need showroom appeal. They have to feel special as soon as you slip behind the wheel. Towards the end of its days, the previous Vectra felt pretty ancient. The latest model, in contrast, has an interior with the sort of minimalist, clean lines you'd expect in a Hoxton trendy's loft conversion, all backed up by controls so simple it's easy to underestimate the amount of thought that has gone into their conception - a sure indicator of smart design. Only the fiddly redesigned indicator stalk will infuriate: why couldn't they leave it alone? The width of the platform allows a number of features to be built into the chunky centre console. It also means that the buttons don't need to be the size of pinheads, something you'll appreciate when trying to adjust the controls. Vauxhall have helped by mounting a number of controls on the steering wheel, itself infinitely adjustable. Rain sensitive wipers, parking radars front and rear, tyre pressure monitors and an electronic child seat detector that disables the airbag are features which were often previously the preserve of upmarket executive offerings. The Vectra has now followed many of its rivals in appropriating these refinements for the mainstream market. Opinions may be divided on the latest look: still recognisably a Vectra, it takes the best aspects of the chamfered Renault Laguna and combines them with bluff, industrial planes and bold styling that is distinctly Germanic. Probably more important is what lies beneath the bodywork - a structure that is 60% stiffer. You'll feel the result in terms of sharper handling, lower levels of body roll and fewer squeaks and rattles. Equally vital of course is the space inside that shape, which is 100mm longer, 50mm wider and 50mm higher. In order to create a more airy feeling inside, the rear seat passengers sit 20mm higher than those at the front. 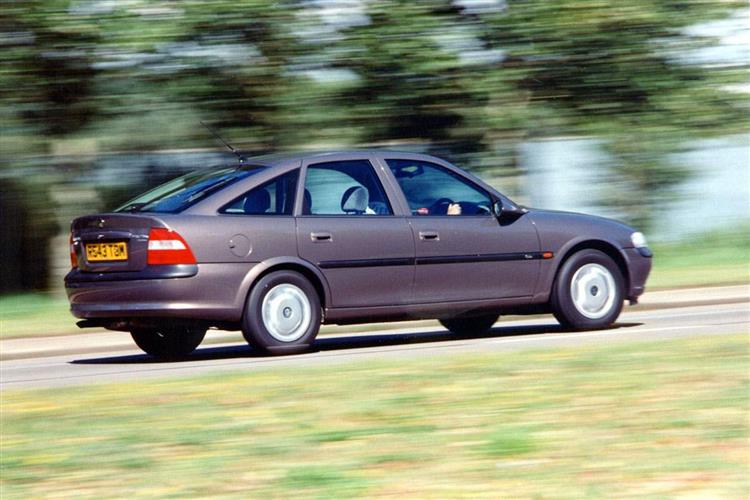