A CLASSIER CARRY-ALL (some text hidden)

The Toyota Previa's reputation was already well established by the time the second generation model appeared in 2000, the earlier more curvy version having been on sale for fully ten years. With a reputation for design innovation and high equipment levels to live up to, the second generation model didn't disappoint. If you need a genuinely spacious full-sized MPV people carrier, the Previa fits the bill very well, offering space age styling and a dazzling array of standard equipment. It's a good deal bigger than the Sharan, Galaxy and Alhambra models that have dominated the market, being closer in size to models like the Renault Grand Espace and the Chrysler Grand Voyager. Both engines on offer have something to be said for them and the Previa's reliability means it's a far less risky used punt than many of its rivals.

Although mechanically speaking the 2000 Previa was a little less adventurous than its mid-engined predecessor, the sleek styling proved more of a draw for customers looking for something that reflected the here and now. With a dashboard that featured more illuminations than Regent Street at Christmas, the Previa certainly had a good deal of showroom wow factor. Launched in July 2000, the model range initially composed of just a slightly modified carry over of the old car's 2.4-litre petrol engine in GS, GLX and CDX versions. A 2.0-litre D4-Diesel engine followed in 2002, boosting the Previa's potential customer base. The key change in this model's lifespan came in early 2003 when the old trim levels were ditched and replaced by a new trim structure. Out went the GS, GLX and CDX grades and in came T2, T3 and T Spirit trim levels much as we'd seen in the Yaris, Corolla and Avensis models. The key difference between the trim levels - leaving aside basic equipment provision - is that the T2 came with eight seats as standard, the T3 with a choice of seven or eight and the T Spirit exclusively supplied as a seven seater. So, in this instance at least, the more you paid, the less you got. It seemed that Toyota haven't ironed all the idiosyncrasies from the Previa. Safety is one area that Toyota concentrated on and all models now featured front side airbags as well as the twin front bags. Seven three-point seatbelts featured on all seven-seater models.

All versions feature those four airbags, digital climate controlled air conditioning, electric windows all round and a tilting steering column. Safety features such as anti lock brakes with electronic brakeforce distribution and brake assist haven't been skimped on and two ISOFIX child seat mounts keep the young ones well clamped in if the worst comes to the worst. Remote central locking, electrically heated door mirrors and front armrests complete the picture. Trade up to T3 level and you'll find roof rails, five spoke alloy wheels and the air conditioning features separate controls for the rear of the cabin. Cruise control is a welcome feature on long continental trips. The range-topping T Spirit adds rear darkened privacy glass, front and rear sunroofs and DVD satellite navigation with built-in Electronic Traffic Avoidance. It's a very capable piece of technology. The advantage of offering DVD-based systems is that the disc can store as much information as thirteen CD-ROMs. Leather upholstery can also be specified. Whichever version of the Previa you opt for, you'll find three rows of seats, with those in the middle and at the rear being benches that recline and slide back or forth to alter the amount of leg and luggage room. Opt to order your car in seven-seat form and two individual seats replace the middle bench. Though like the individual seats, the two split-folding benches are removable, they do have three disadvantages. The first is weight: even the basic chairs aren't light and the benches require a real workout. The second is the Previa's need to have somewhere to store the things should you take them from the vehicle. In the old model after all, the rearmost seats folded up into the side of the cabin: even better, some rivals allow you to store them under the floor. Entry to the rear of the airy cabin is easy thanks to two huge sliding doors. Once inside, there are no fewer than 18 different storage compartments, including a split-level glovebox and deep front door bins. All of which ought to be useful should you decide to take up the option of folding the seats into a makeshift double bed. Thanks to a longer wheelbase (and suspension that no longer intrudes into the cabin), there's a more spacious feeling in the latest Previa - for passengers at least. As ever with vehicles like this, luggage room with all the seats in use is a different story. And as ever, if you plan to regularly use the car to capacity, paying a bit extra for a roof box will probably prove to be money well spent. Start to remove those seats of course, and you quickly arrive at van-like levels of carrying capacity (103.4 cu ft with two seats in place). 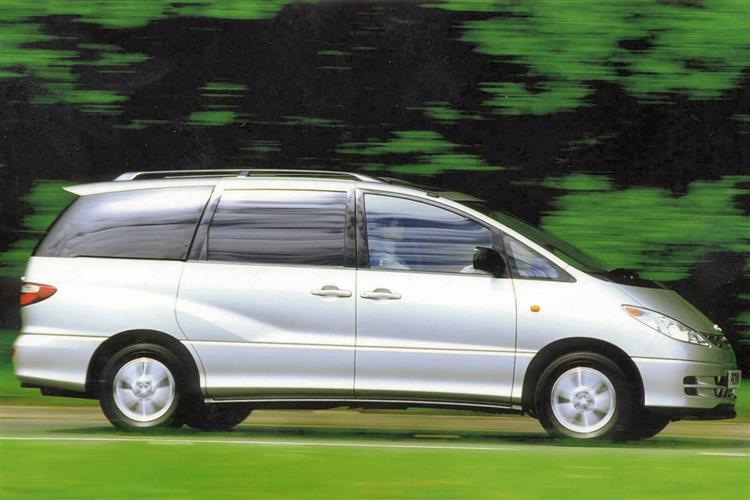