CRUISING FOR A BRUISING (some text hidden)

Although here in the UK we like to think of Land Rover as the 'real thing' and our transatlantic cousins hold Jeep to be the 'genuine article', the rest of the world doesn't necessarily agree. Ask an Australian, a South African or even a Nepali what the authentic dyed in the wool 4x4 is and you'll get the same answer - the Toyota Land Cruiser. It's been around in one form or another for more than fifty years and the 2003 'J120'-series iteration of the 'Light Duty Series' 3.0 D-4D model marked a clear change in philosophy, Toyota endowing the Land Cruiser with a whole lot more glossy sophistication than ever before. The 3.0-litre D4-D diesel engine that powered the overwhelming majority of examples of this car in this country helped create what has to be one of the most attractive family 4x4 packages around. There aren't too many good used buys in this sector but the Land Cruiser D4-D stands out like a beacon.

Going into a full run down of Land Cruiser history may well be interrupted by the coming of the next ice age, so we'll press the fast forward button to 2003 and the introduction of the 3.0-litre D4-D 'J120' 'Light Duty Series' models. The family SUV sector had been undergoing enormous change, some manufacturers opting to keep the faith with 'rough and ready' 4x4s whilst others aimed to capitalise upon the popularity of sharp handling compact 4x4s and ever plusher luxury all-wheel drives by turning their family sized 4x4s into something altogether slicker. Toyota probably adopted the smartest tack. The company knew that messing with the Land Cruiser too much would have loyal customers in revolt so they kept the rugged body on frame underpinnings but ensured that the rest of the detailing was sleek, sophisticated and resolutely post millennial. The Land Cruiser was also offered with a 4.0-litre V6 engine for those customers who had an interest in propping up OPEC but it was the D4-D diesel engined cars that made the biggest impact amongst British customers. Arriving in showrooms in January 2003, the 'J120' Land Cruiser D4-D was a steady seller and gained some critical acclaim. Revisions for the 2005 model year drew 20% more torque out of the D-4D engine producing improved acceleration and fuel efficiency. New transmission set-ups were also added and cruise control became standard across all models. Further alterations to the engines in early 2007 saw the diesel up-rated to 171bhp and both units adapted to meet the Euro IV emissions standards.

The Land Cruiser had to replace the old Land Cruiser Colorado range and go head to head with rivals such as the Land Rover Discovery and the Mitsubishi Shogun. Expect a rival for a BMW X5 or a Mercedes M-Class and you may find the Land Cruiser a little too blue collar for your liking, but if you want a car that can walk the walk when the walking gets waterlogged, the Land Cruiser is a better bet. Four trim levels were offered, LC2, LC3, LC4 and - you've guessed it - LC5, Toyota obviously feeling that we're all a little too flush to bother with an LC1. Penned by British designer Lance Scott, the shape draws heavily upon the RAV4, with a dramatic look to the front and rear lights and a toothy chromed grille. Like the RAV4, it's also available in three or five door body styles. Designed to be more European in feel than past Land Cruisers, this vehicle was developed at Toyota's ED2 design studio in southern France, the same facility that brought us the latest Avensis, Corolla and Avensis Verso models. Whereas many 4x4 manufacturers - including Land Rover - have found a way of mating a car-like monocoque chassis with proper 4x4 capability, Toyota keep faith with the separate ladder chassis. This gives the Land Cruiser huge wheel articulation when the going gets tough but the downside is on-road body control that's not quite as tight as the class best. As with any big 4x4, a number of compromises have been built into the Land Cruiser and for a vehicle geared towards the rough'n'tough end of the scale it does a good job. The fact that the test vehicle was riding on knobbly all-terrain tyres that were designed to show the vehicle's mud-plugging capabilities in a favourable light may have had something to do with the slightly ponderous feel. 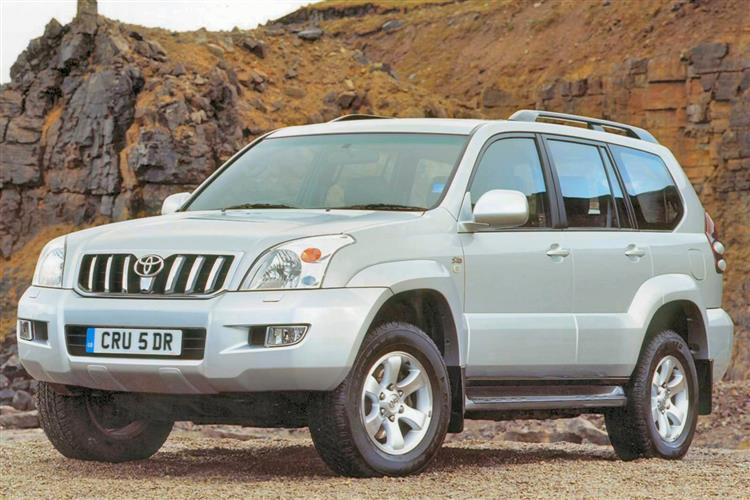