In these ecologically friendly times, the Toyota Landcruiser Amazon is a refreshingly unabashed 4x4 throwback. Big when it's trendy to be small, unfashionably square, unashamedly thirsty and hugely expensive, the Amazon and its elder incarnation, the Landcruiser VX, are firmly from the old school and all the better for it. Sometimes it has to be said, size matters, and judged by that criterion the Landcruiser is certainly significant. More often seen climbing a kerb in the high street than corralling livestock, the British interpretation of the Landcruiser's function has often missed the mark. Nonetheless, as a used buy it has a certain charm, and in those rare instances where its size and ruggedness are actually put to the test, it's guaranteed to come up trumps every time.

The Landcruiser has been around for a very long time. The VX 'J80'-series model was launched in the UK in 1990 and originally came only with a 4.2-litre turbo diesel engine. This model was revised in November 1992, when it received a mild facelift, ABS and improved suspension. The automatic model received cleverer four-speed transmission, leather upholstery and air conditioning. A number of minor trim updates took place prior to the launch in May 1995 of the 24-valve VX 4.2 diesel and the VX 4.5-litre petrol version. The new diesel unit generated 168bhp whilst the huge petrol engine developed 202bhp. Not too impressive unless you bear in mind that it was tuned for low-down torque, of which it had enough to tow trees out of the ground. The Amazon badging came about in February 1997 to differentiate the biggest Toyota from its smaller Colorado sibling. In April 1998 the 'J100 Series' Landcruiser Amazon was launched, making the product line a proper stand-alone one rather than a badge engineering exercise. Two engines were on offer, a 4.2-litre turbo diesel, and a monstrous 4.7-litre petrol unit. The Amazon now had power as well as size. A mild facelift was brought in for the 2006 model year and these Amazon models can be spotted by their three horizontal bar grille with its larger Toyota badge. The optional equipment was also improved to include a £2,600 DVD system with screens in the headrests. In 2007, the Land Cruiser Amazon was re-launched in 'J200' form and renamed the Land Cruiser V8. It received a 4.5-litre V8 diesel engine with 286bhp along with various other updates to the interior and styling.

The Landcruiser Amazon and VX ranges are both enormous, rugged and reasonably expensive on the used market. The VX and early Amazon models are good if you need a spacious, go-anywhere vehicle, but it really is worth stretching the finances that bit further and opting for the 'Series 100' Amazon. This is a far more accomplished car on tarmac, and interior sophistication was also radically improved over the early Amazons. One way to imagine this car is to visualise a Lexus with high ground clearance and three rows of seats. With 65% of buyers opting for the turbo diesel model thanks to the lower asking price, the manual transmission option and the 25mpg capability. Most come fitted with air conditioning, cruise control, ABS, remote central locking, twin airbags, a CD system with autochanger, alloy wheels and side steps. Plus of course those two extra (removable) foldaway seats in the rear. The detailed touches are especially impressive. The heated rear side windows, the power-operated rear quarter vents and the way the air conditioning splits the climate front and rear. Plus of course, there are a huge number of cup holders; this, after all, is a car you can stretch out and relax in. If, in this eco-friendly world, you question a car like the Landcruiser Amazon, then you're not alone. Even Toyota's Chief Engineer Takeo Kondo "regrets" that its sheer bulk couldn't have somehow been reduced. 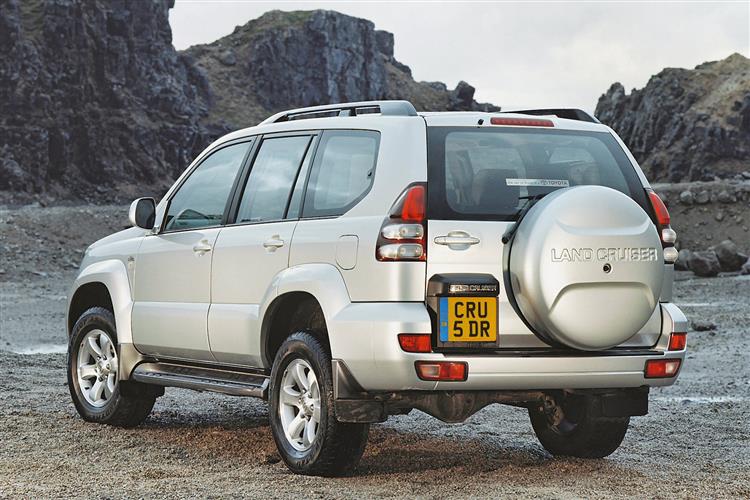