The Avensis Verso is Toyota's take on the mid-sized MPV, further blurring existing ideas of what an MPV should look like. The Verso sub-brand now includes Yaris, Corolla and Avensis models with the full-sized Previa at the top of the range. This wide range of Verso products allows Toyota to attack a number of niche market sectors, the Avensis Verso being probably the most ingenious and practical example to date. One advantage of buying used is that there aren't too many nasty surprises with a car like this, a factor important to the Avensis Verso's conservative target market.

Despite the Avensis part of its moniker, the Verso utilised a completely different chassis to the hatchback and saloon Avensis models it was launched alongside in October 2001. As a template for the subsequent generation Avensis range, the Verso promised good things. With a full seven seat capacity and a pair of decent 2.0-litre engines the Verso stacked up well against many rivals. Perhaps buyers were a little confused by the branding or maybe the message got lost a little, but the Avensis Verso never really caught the mini-MPV buyer's imagination in the same way the Citroen Xsara Picasso or Vauxhall Zafira did. Maybe this was due to the premium prices charged for what was, admittedly, a quality product but sales have been sluggish. Your best bet to pick up a used example may be ex-demo cars from a franchised dealer. In late 2003 the Avensis Verso received the sort of mild facelift that manufacturers carry out from time to time to keep their products fresh. New headlamps and redesigned bumpers were about the size of it visually, while T3 and T-Spirit trim levels were introduced to replace the GS and GLS designations. Specification was also upped across the range,

Ask most people to name the original mini-MPV and they'll probably plump for the Renault Scenic. Toyota executives sigh wearily when they hear this, painfully aware that their version of the concept, the Picnic, was on sale at least six months earlier than the French car, but never really managed to capture the public's imagination in quite the same way as the Renault. Not to worry. The came back, unbowed and unapologetic, with another stab at the burgeoning market sector, the Avensis Verso competent in all the areas the Picnic was ineffectual. The Verso boasts seven seats, now de rigeur for this particular class, and two engine options, a 147bhp 2.0-litre VVT-i petrol unit and the excellent D-4D 2.0-litre diesel that's good for 114bhp. The styling is tidy without being anything too wacky, which makes sound economic sense. MPV buyers tend to be a conservative bunch and steer clear of gratuitously indulgent designs. Safe styling sells. As does clever packaging, which the Avensis Verso boasts in spades. In order to fit seven people in, you need a long wheelbase. Therefore, the Toyota moves the fuel tank and spare wheel to free up extra passenger room, and even manages to provide a decent luggage capacity, although if loaded with seven people it may well be credit card, passport and toothbrush time. That long wheelbase of 2825mm allows the Avensis Verso to offer the lowest overall height in its class along with a spacious interior. Dispensing with the usual altitude problem of mini-MPVs in turn has a beneficial effect on the Verso's centre of gravity. Whilst the third row of seats are fixed, the second row are on runners and all seats can be folded or removed entirely to create a viable five-person holiday wagon, and like most MPV contenders the seats can be folded into tables that can launch a McFlurry at incredible velocities during spirited braking. Gazing back into the gaping fuselage, the Verso seems more akin to a Ford Galaxy than a Renault Scenic and the tape measure certainly backs this assertion up. Equipment is generous; the GS model being supplied with twin airbags, ABS with EBD, stability control, front air conditioning, a CD player, dark metallic trim and 15" alloys. The GLS adds, amongst other items, a satellite navigation system, 16" wheels, roof rails, air conditioning all round and a leather steering wheel/gearknob/handbrake ensemble. 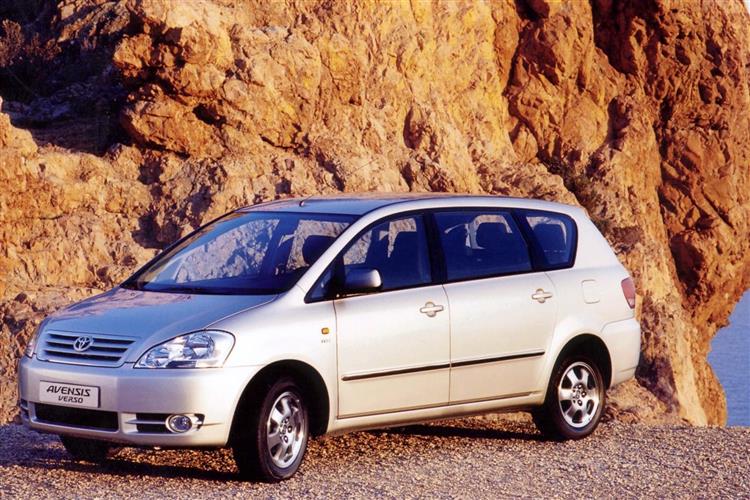