It's taken a while but the public is only now catching on to quite what a good car Toyota's Corolla Verso is. The first generation car was a product that completely passed the British public by and was unfairly ignored. Undeterred by this indifference, Toyota went back to the drawing board and launched a second generation Corolla Verso in 2004 that has started to pick up some meaningful sales. Despite the fact that it wins almost every group test it ever enters, the Verso has never sold in the same order of magnitude as cars like the Vauxhall Zafira, the Renault Scenic or the Citroen Xsara Picasso, but live with one for any extended period of time and you'd have to admit that Toyota have got the product spot-on. Here's how to pick up a decent post-2004 second generation model.

The key complaint amongst buyers of the Mk1 Corolla Verso was that the bulbous styling was somewhat anonymous, so Toyota's designers sharpened their pencils and set about creating a sharper set of clothes for the second generation Corolla Verso. While they were at it, they invested in a thorough overhaul of the interior, endowing it with a good deal more style and equipment. The engines and running gear never generated any cause for complaint and were largely left alone as were the existing trim structures. T2, T3 and plush T Spirit models were offered with a choice of either a 109bhp 1.6-litre powerplant or a 1.8-litre 127bhp engine. By far the most satisfying option, however, was the uprated 114bhp D4-D diesel unit. That was until the 2.2-litre D4-D models entered the range in the later stages of 2005, the Corolla Verso was renames simply Verso at around the same time. The standard 134bhp engine was pokey enough but the 175bhp unit in the T180 model really packs a punch. In the summer of 2007, the Verso received a revised grille and bumper to bring it in line with the Auris and Yaris. The T3 models received dual-zone climate control while the T-Spirit and T180 derivatives got sat nav. A sporty looking SR special edition was also introduced.

The shape is still reminiscent of the original Corolla Verso but everything seems to have been sharpened up, as if the Verso has spent a month at Automotive Fit Club. The wheel arches are more defined, and the front grille and bumper are slimmer and sleeker. There's also a definite upper and lower body to the car, helped by those distinctive shoulders which give it a far more progressive look. Unlike many similarly sized rivals, the Corolla Verso can seat seven and, uniquely in its class, all five rear seats fold down into the floor to create a totally flat loading surface. This means that you won't need to haul heavy seats into and out of the car if ultimate carrying capacity is required. A lot of thought has gone into this system, the seats not only being the lightest in class but also requiring a simple one-touch operation to fold each one flat. The interior looks a good deal sharper than the old car, with tighter manufacturing tolerances meaning panel fits are better. As with all manufacturers, Toyota have worked hard at getting the 'door slam' sound exactly right and the combination of carefully sited hinges and clever air sealing makes the Corolla Verso sound more impregnable than Fort Knox when you slam the doors shut. The materials used throughout the cabin have been thoroughly upgraded too with a combination of metallic finishes to accentuate the centre console. The design majors on geometric shapes and three-dimensional elements to render an arch like effect. It's quite unlike any other Toyota interior and marks a new design direction that's surprisingly bold for a model that will be marketed to some of the most conservative new car customers. 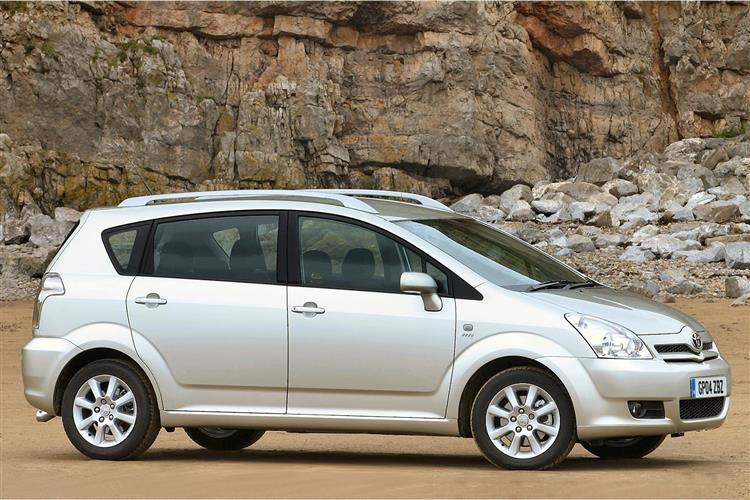