Medium range estate cars have staged something of a comeback in the last few years. One of the lower key but higher quality offerings is Toyota's Avensis Tourer. Once a rather lightweight and compact estate, the Avensis Tourer completely changed its focus in 2003 when it was relaunched. Bigger, better equipped and aimed at a more premium sector of the market, this car took aim at the best in the class. Cars like the Ford Mondeo estate and the Honda Accord Tourer both had to be on top of their game to fend off the threat from the big Toyota. As a used proposition it's as close to bullet proof as it's possible to get.

The 2003 Avensis Tourer is a fascinating car, reflecting the changes that have hit the estate car middle market. This sector was dying on its feet as mini-MPV style vehicles and small 4x4s stole most of its sales. A resurgence in the upper end of the market in the early Noughties saw many manufacturers having to reprofile and relaunch their products. The Avensis Tourer was a case in point. Toyota took the gamble and pitched the Avensis Tourer at the quality end of the medium range estate market, powered by decent 1.8 and 2.0-litre petrol engines. In November 2003, Toyota expanded the range with a clean D-CAT diesel engined version that used a revolutionary catalyst system to lower emissions still further but unfortunately wasn't offered in Tourer guise. This initially sold alongside the less high-tech D4-D diesel engine that had been introduced to the range a few months earlier. A flagship 2.4-litre petrol model also joined the range at the end of 2003. A 2.2-litre diesel engine of 148bhp was unveiled in Spring 2005. The 2006 facelift brought a variety of changes to the Avensis although the styling remained fairly nondescript. Ride and handling issues were addressed through revised suspension and steering settings while D4-D 130 and D4-D 180 diesels were also introduced.

It's no fashion icon, but there is a quality look and feel to the product which, for the first time in a Toyota of this size, will please Mondeo and Vectra customers as well as possibly appealing to a few of the BMW and Audi buyers shopping in the next class up. The doors thunk shut like a Lexus and it was to their luxury division that Toyota looked to imbue the Avensis interior with a genuinely upmarket feel. It seems to have worked. Soft touch plastics, neat metallic finishes and a well appointed cabin make the car feel a class up. Indeed, you could put Lexus logos on the thing and, although you might not be that excited by the product, you probably wouldn't think the badge out of place in terms of quality of engineering. With that achieved, it might now be fair for Toyota to expect that some of their more traditionally practical virtues would begin to come into their own. So what are these? Well, since despite the trendy name, this is an estate car, we'd better start at the sharp end. Hearing that this latest generation Avensis is longer and wider than its predecessor isn't something you should get too excited about: the old model was in danger of getting rivalled by cars from the next class down. It's more significant to point out that this latest Toyota is still shorter than its rivals - around 100mm shorter than a Mondeo for example. Which leads one to worry as to whether the Tourer's carrying capacity is going to be up to very much. As it happens, it's not bad. There's 520 litres of space on offer with the rear seats in place, rising to 1500 litres when they're folded flat: good enough to get close to the class leaders in other words, if not quite to match them. A section of the load floor can be lifted to reveal a hidden storage tray, big enough to accommodate the luggage cover when not in use. An integrated partition net can be added to this cover to stop shopping bags crashing into garden centre produce and vice versa. Moreover, the luggage floor itself can be folded to create separate storage compartments, while tie-downs and shopping hooks are there to ensure that with loads both large and small, delicate items can be carried safely. 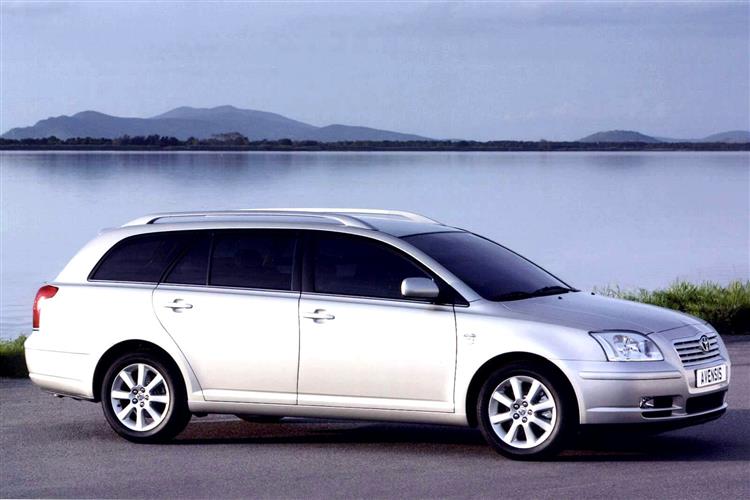