SO SOLID DEBUT (some text hidden)

Few cars have transmogrified in quite such a dramatic fashion as the Toyota Avensis. Once a rather lightweight and compact medium sized Mondeo challenger, the 2003 edition saw the Avensis undergoing a fundamental reappraisal of its place in the overall scheme of things. No longer was the car content to do battle with off the pace rivals like the Rover 45 and the Mazda 626. Now it was taking aim at the best cars in the class - models like the Ford Mondeo and the Honda Accord. With saloon, hatchback and Tourer models to choose from and an impeccable record for reliability, the 2003-onwards version of Toyota's Avensis is as close to a risk-free used bet as it's possible to get.

Toyota were faced with a dilemma when developing the 2003 Avensis. The market for mainstream medium range family saloons and hatches was shrinking fast with customers increasingly likely to downsize to a smaller hatch or try to preserve their investment by plumping for something with a prestige badge. Should the company make the Avensis a cheap and cheerful car that followed its predecessor's lightweight, low complexity approach or else make a serious commitment to moving upmarket with all the costs that entailed? Toyota took the gamble and pitched the Avensis at the quality end of the medium range market, covering their bets with a broad range that included a hatch, a saloon and a Tourer estate with a range of decent 1.8 and 2.0-litre petrol engines. In November 2003, Toyota expanded the range with a clean D-CAT diesel engined version that used a revolutionary catalyst system to lower emissions still further. This initially sold alongside the less high-tech D4-D diesel engine that had been introduced to the range a few months earlier. A flagship 2.4-litre petrol model also joined the range at the end of 2003 and in early 2005 we saw a 148bhp 2.2-litre D4-D diesel introduced. The 2006 facelift brought a variety of changes to the Avensis although the styling remained fairly nondescript. Ride and handling issues were addressed through revised suspension and steering settings while D4-D 130 and D4-D 180 diesels were also introduced.

Designed in France, the latest car is firmly Eurocentric, being marketed solely on this continent. It's bigger, bolder and far better looking than the Mark 1 Avensis and has gone about deconstructing the medium saloon genre with a vengeance. Three bodystyles are available - saloon, liftback and Tourer - while three petrol engines were initially on offer. Customers could choose either a 129bhp 1.8-litre VVT-i engine, a 147bhp 2.0-litre direct injection VVT-i powerplant or a 2.4-litre version of similar direct injection configuration. The VVT-i set-up is Toyota's variable valve timing system which offers decent torque and fuel economy at low revs and a hefty slug of power at full throttle. You can also try to find an example with the 116bhp 2.0-litre D-4D diesel engine or go for the advanced 2.0-litre D-CAT (Diesel Clean Advanced Technology) diesel. The 2.2-litre diesel models arrived later and the post 2006 facelift model was offered in sporty T180 form with a 2.2-litre 177bhp oil-burner plumbed in. Trim levels depend on your choice between five options: T2, the rather clumsily-named T3-S and T3-X, T4 and T Spirit. All come with air conditioning, an alarm immobiliser, power windows and mirrors, ABS and an excellent quality stereo system. The T3 grades are basically there to differentiate between those who want satellite navigation (T3-S) from those who simply want extra luxury (T3-X). T4 offers both, while the plushest T Spirit level also includes power seats with leather trim. Safety was prioritised with all models getting no fewer than nine airbags as standard, including a driver knee airbag which represents a UK first. Secreted beneath the steering column, this system protects the driver's knees and lower legs from injury. Step from an old Avensis into the cabin of the post-2003 car and you'll spot no significant family resemblance. The doors thunk shut like a Lexus and it was to their luxury division that Toyota looked to imbue the Avensis interior with a genuinely upmarket feel. It seems to have worked. Soft touch plastics, neat metallic finishes and a huge cabin make the Avensis feel a class up. 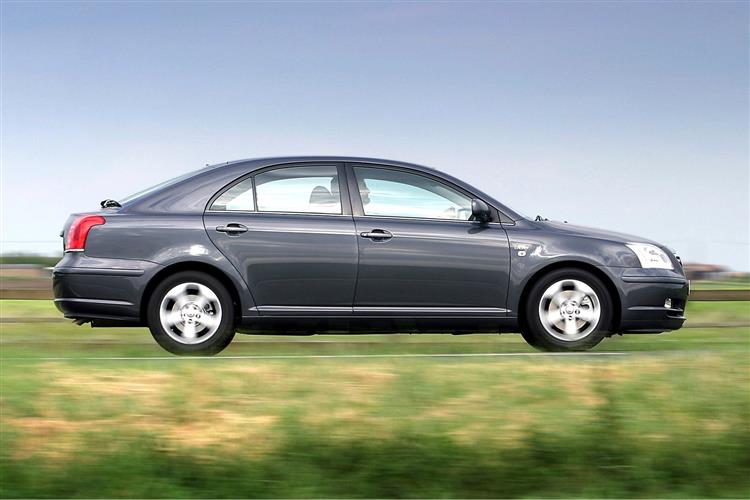