Renault had a great head start when it came to launching the second generation Scenic. With a reputation as one of the originators of this rapidly evolving market niche, all eyes were on the French company when, in 2003, it replaced the existing model with an all-new car, again based on the Megane platform. With a wider range of engines, better safety provision than ever and far edgier styling, the latest Scenic is a formidable contender. If you can track down a low mileage used example, it will make a very informed purchase.

Few can argue that the original Renault Scenic was an inspired price of product design. Whilst it certainly wasn't the first car to offer this sort of versatility, it instantly captured the public's imagination. Renault's image as lateral thinking innovators was at its zenith following the success of the astonishing Espace and by scaling down the Espace proposition onto the existing Megane platform, Renault developed an instant class leader at relatively low cost. Rivals were caught on the hop and needed some time to adjust their way of thinking to this new family-friendly format. With two clear years of breathing space before Vauxhall launched the Zafira and three before Citroen developed the Xsara Picasso, the original Scenic cleaned up. Ford and Volkswagen were caught uncharacteristically a-dither, especially when Vauxhall's seven seater threw them a curve ball. These markets are inherently dynamic, however, and when these two industrial powerhouses finally got their game together, Renault knew it had to respond. Luckily, its product development cycle was one step ahead and the latest Scenic II once again managed to steal a small but crucial march on its rivals. As before, the Scenic rides on Megane running gear, offering five seats. A long wheelbase seven-seat Grand Scenic is also available but most will settle for the regular model, offering as it does a usefully larger cabin than its predecessor. The wheelbase is up 105mm and the overall length stretches 125mm. It's a hefty 127mm wider and even stands a good deal taller. Height-wise it's within a centimetre of the first generation Espace, but it's a significant degree longer and wider and the cabin is massively more space efficient. How times have changed. The all-wheel drive RX4 model based on the previous generation Scenic was sold alongside the Scenic II for some time before being retired in 2004. A 2.0-litre petrol turbo version was launched in May 2004 to spike the guns of the quicker Vauxhall Zafira models. A major facelift befell the Scenic in mid 2006, the biggest alteration being to the styling, Renault giving the car a nip and tuck in order to keep it looking fresh. Xenon-look headlamps, LED rear lights and revised front and rear bumper assemblies give this mini-MPV a sharper, more contemporary look a million miles away from the Teletubby-soft original that took Europe by storm. The interior was revised too, with better quality trims, and a different palette of exterior colours. The 2.0-litre turbo petrol engine met its end at this stage but a 150bhp 2.0-litre dCi diesel far more in tune with the Scenic's character took its place. The Conquest model turned up in the summer of 2007 with chunky offroader-esque styling.

What You Getword count: 279

The interior feels roomy enough, the clean lines and low dashboard adding to the airy feel. Legroom is especially generous in the back, especially when the rear seats have slid into their rearmost position. The central seating position in the back can be removed and the remaining two seats repositioned to allow more elbowroom but it's not quite as slick as Ford's diagonally sliding system. Aside from that minor niggle though, there's very little to fault the Scenic interior. There are storage cubbies in every conceivable nook and cranny as well as some you may need the user manual to find. Even the glovebox is cavernous. With the rear seats in position, luggage capacity has risen by 70-litres to a respectable 410 litres and loading is made simple by a glass tailgate window that opens independently. Renault have bagged a full five star Euro-NCAP crash test result for the Scenic. Front, side and curtain airbags are fitted as standard to every variant and all berths are fitted with five-point seat belts. The range of engines continues to be a major Renault advantage, the Scenic carrying over many of the excellent powerplants from its predecessor and adding a few more to boot. With extra passenger and luggage space, superior versatility and styling that's a good deal more toned down in comparison with its Megane sibling, the Scenic looks set to re-establish Renault as one of the mini-MPV heavy hitters again. The design flair of the interior and the well judged exterior detailing lend the Scenic an enormous air of self-confidence. It now feels the quality product the old car always had pretensions of being. Small wonder Renault seem so smug. 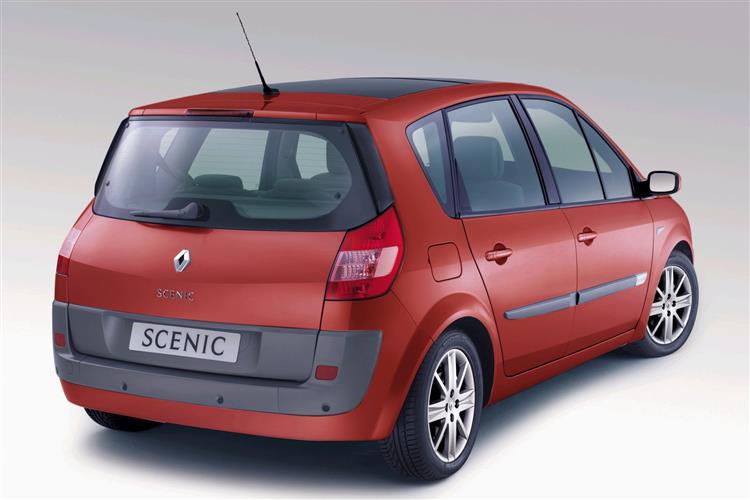