It's easy to get dewy eyed with nostalgia when remembering the Renault 4. Tough as old boots, about as sophisticated as a thumb in the eye and with styling more akin to a henhouse than a car, it had a certain peasant charm. The Renault Kangoo has taken the basic ingredients and given them a new twist. Based on a van but with additional fenestration, the Kangoo offers cheap and cheerful transport with good luggage capacity. It was fair to assume that as long as you didn't expect sophistication you wouldn't be disappointed. But does a used Kangoo offer anything over, say, a marginally older family estate? In a rapidly growing sector where mere appliance of the word 'lifestyle' is a means to bump up the prices, the unpretentious Kangoo entered near the bottom and aimed to stay there. With its commercial vehicle basis, development costs were minimised. Along with its rival, the Citroen Berlingo Multispace, the Kangoo inhabited a niche pioneered by miniature glazed Suzuki vans of the past. Parents will love it, as there's precious little for kids to snap off or rip up.

Although the British public were slowly getting used to the idea of small vans with windows, the Kangoo was something different again. For a start, the name took some adjustment. Kangoo? Was this the start of a trend by Renault for names based on antipodean fauna minus a middle syllable? Would the market be flooded by Renault Bancoots, Kolas and Plapuses? Fortunately not, and the Kangoo name gradually became accepted, mirroring the cars light-hearted, almost ironic nature. The styling was something of an acquired taste too. Renault billed the car as its 'Practical Joker' but the joke appeared to have been played on the Kangoo, wearing as it did a face that looked as if it had just sat on a drawing pin. Nonetheless, it was certainly more distinctive than Citroen's blandly styled Berlingo Multispace. It's certainly true that the French have done basic rugged transportation better than anybody else. Rural France wouldn't be the same without the sight of Citroens 2CVs, Renault 4s and Peugeot 104s chugging back from the boulangerie in the morning. The basic engineering involved suited the rustic way of life, but things change. When the Kangoo was launched in the UK, the range consisted of two models, both with engines that the whilst not state of the art, were nonetheless a long way removed from the state of the ark mechanicals of French cars of yore. Available with a 1.4-litre petrol engine developing 75bhp and a 65bhp 1.9-litre diesel, both borrowed from the Clio range, the Kangoo's key market advantage came through the provision of five doors at a time when the chief rival from Citroen was only equipped with three. Both engine options were available in basic RN guise, although the 1.4 was also offered with a slightly better equipped RXE trim level. In March 2000, a 1.4 Alize limited edition version was launched, plugging a gap between the RN and RXE. A 1.4 Helios limited edition model was introduced in July, boasting, as its name suggests, twin sun roofs, thus aiming to negate the Citroen Berlingo Multispace's USP - its full length electric sliding sunroof. September 2000 saw the fitment of Renault's RAID anti-intruder device. In 2001 the trim levels were rationalised to a sole Authentique version and the engine selection was altered. Buyers now chose between the 1.6-litre 16v petrol and a 1.9-litre 80bhp turbodiesel. The Trekka 4x4 version was launched with the same choice of powerplants and Nissan-sourced all-wheel drive menchanicals. From the spring of 2004 onwards, all Kangoos came with ABS brakes and by the autumn of that year a 65bhp version of the 1.5 dCi powerplant was available. The diesel engines both received a power boost at the start of 2006 with the dCi 65 becoming the dCi 68 and the dCi 80 getting 84bhp. There were also minor alterations to the trim and the colour scheme range.

Practicality and lots of it. What's notable by its absence is any semblance of wry design, clever foldaway seating arrangements and the latest high-tech engines. What the Kangoo offers are hardwearing wipe clean surfaces, rugged cargo nets, huge luggage bins and a vehicle built to withstand a hard life. If you already have one of the current generation of mini MPV s on your driveway, ask yourself when you last rearranged the interior seating into a conference table facility or indeed even filled all the seats. Probably shortly before you wondered where said passengers luggage was going to go. No such problems exist with the Kangoo. Inside, it's fairly utilitarian - though that's intentional: you can clean the interior with a hose if you really want to. If necessary, the rear bench pivots forward to convert the Kangoo from people carrier to a 2600-litre estate. Moreover, thanks to those sliding side doors, it's a lot easier to access the space. Any further versatility depends on whether you've paid extra for the plusher RXE model, which adds a 60/40 split-fold for the rear seat and a roof-mounted stowage rack inside the cabin. You also get the centre three-point rear seatbelt which really ought to be standard on the RN given the likelihood of three children being in situ across the rear bench. Other items exclusive to the RXE include a passenger airbag, electric front windows, remote control central locking, electric mirrors and an upgraded stereo. Alloy wheels, ABS and air conditioning are all optional. Useful touches include the protective mouldings that surround the car and resist the knocks and scrapes of city life. Then there are the interior rubber mats that can be taken out and placed under the tap. And the rear tailgate that opens upwards high enough for someone over 6ft5" to stand underneath in a rainstorm. There are cheaper umbrellas about but few will seat five people. 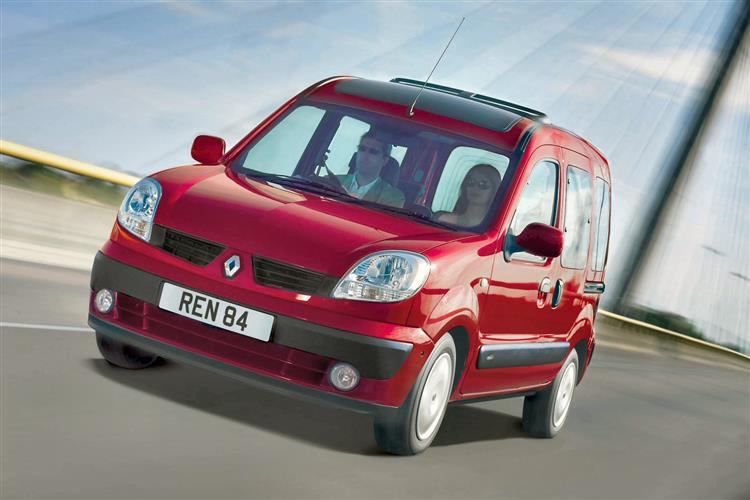