FLIP BUT NO FLOP (some text hidden)

Launched within close proximity to each other, the Renault Megane CC and the Peugeot 307 CC seem natural competitors but drive the two cars back to back and you'll be left in no doubt which is the superior offering. With smarter styling to boot, Renault's Megane CC is the top of the folding tin top crop. There isn't a bad model in the range and used buyers will find a wide choice of cars with something bound to suit.

Although its predecessor was undoubtedly a good looking car, Renault's Megane CC moved the game on quite significantly when it was launched at the tail end of 2003. With sharper lines, vastly improved safety features and a trio of punchy engines, the CC also featured the de rigeur retractable hard top roof. Initially there was a 1.6-litre VVT petrol unit acting as the entry-level powerplant with the 2.0-litre petrol engine just above it being the most popular pick. Showing their confidence in diesel engine refinement, Renault also launched an economical and torquey 1.9-litre dCi powerplant that was good for 120bhp. The biggest subsequent change has been the introduction of a punchy 194bhp 2.0-litre turbo engine. A 210bhp version of this unit powers the Laguna. In the Megane CC that would be quite something. The Megane's mid-term facelift showed up in early 2006. More observant members of the public might spot elongated, sleeker headlamps and alterations to the grille which see everything come together in a 'V' shape either side of a more prominent Renault badge at the front. Inside, the instruments got chrome-ringed dials with white background lighting. At the same time an automatic version of the 130bhp dCi engine was introduced and the 105bhp 1.5-litre dCi diesel made it into the CC. The sporty-looking Dynamique S special edition models were launched at the start of 2007 with all the other variants gaining extra standard equipment at the same time.

What You Getword count: 487

Despite sharing a strong family resemblance with the Megane hatch, in fact only the front headlamps, grille and bumper section and front bonnet are shared with its more practical sibling - though inside, the dashboard and the front seats are identical to those in Megane II. Designed by Renault's Corporate Design Department, the Megane Coupe-Cabriolet is a very sleek car when the roof is down. With the roof up, the silhouette is unconventional, the low dome of the roof and the long rear bootlid taking a little getting used to. The absence of door pillars or side trim strips contribute to the elegant lines and a lot of care has gone into constructing a roof that not only looks good but works well too. Peugeot experienced a lot of teething troubles with the 206CC roof and Renault are looking to avoid similar glitches. The mating surfaces around its opening panels - critical in a cabriolet - have been the object of special care. The stiffness of the body has been designed to keep the cabin space intact in the event of a rollover with the aid of strengthened windscreen pillars, body sides and sills, and by two fixed hoops installed as standard. The third-generation Renault System for Restraint and Protection and the six airbags, including the two anti-submarining airbags beneath the cushions of the front seats, provide occupants with optimum protection. In addition, the Megane Coupe-Cabriolet can be equipped with two automatic safety hoops which deploy whenever an imminent rollover is detected. Luggage space is a class-leading 490 litres with the roof in place, but take this figure with a pinch of salt. Much of this is earmarked for the roof cassette and with the roof folded down, you'll only get a meagre 190 litres to play with. Equipment levels are respectable for a mid-range cabriolet. The electric door mirrors, the four electric windows, with one-touch opening, the anti-draught nets and safety hoops, covered with soft foam, contribute to operating comfort. There are several stowage spaces, including a refrigerated 17-litre glove box which is automatically locked whenever the doors are locked, to protect its contents from theft. Passenger accommodation comes in the shape of four proper seats and interior space which is considerable for a car of this ilk. In the front, the lowered position of the seats ensures comfortable headroom in coupe configuration. The slope of the windscreen has been designed to provide the front seat passengers with maximum space and to reduce what designers dub "cap effect". This is the feeling that the windscreen header rail is intruding on your peripheral vision, masking the view of the road ahead, especially on typically undulating country roads. In the back, the headroom, the knee clearance and the available width are among the best in the class. In addition, access to the back seats is made easier by the position-memory of the front seat slides and seat backs. 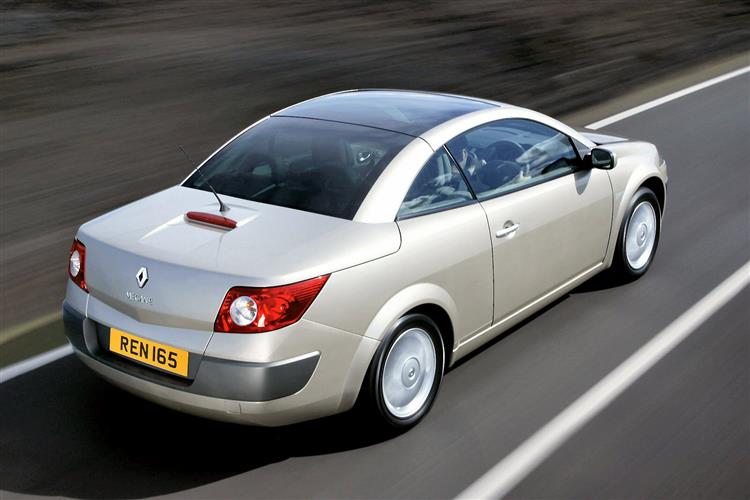