SLEEK AND YOU SHALL FIND (some text hidden)

The Peugeot 307SW was launched to a rather sceptical British public in 2002 alongside its more conventional 307 Estate sibling. Although the 307 hatch had been well received, many potential customers saw the SW as Peugeot's way of making a quick buck in the lucrative mini-MPV market without a properly developed product. With seven seats levered into the compact bodyshell the 307 will never be the most practical contender for your mini-MPV pound, but can a used car really be recommended over rivals? Find out here.

Given that Peugeot are a sister company to Citroen, purveyors of the UK's best selling mini-MPV, the Xsara Picasso, their record at producing a mini-MPV of their own hasn't exactly been stellar. Yes, the 807 is a fine full-sized people carrier but in the lucrative sector of the market where cars like the Xsara Picasso, the Renault Scenic and the Vauxhall Zafira ll make hay, Peugeot's wares are conspicuous by their absence. The 307 SW was a belated attempt to offer something a little different to the customer who wanted the utility of seven seats but possibly didn't want to look as if they'd been buried under the weight of family commitments. As such, the 307 SW had some appeal, offering a more 'lifestyle' look and feel than many suburban mini-MPVs. Upon launch the range consisted of two petrol engined versions, a 1.6 and a 2.0-litre as well as two turbodiesel models in either 90 or 110bhp guises. Although sales have been slow, you should be able to track down a used example through Peugeot's dealer network at a good price. The 307 CC was facelifted in time for summer 2005. The gaping air-intake in the front bumper, huge headlamps and shortened bonnet with pronounced side ridges all mark these cars out.

The 100mm grafted into the 307 hatch's wheelbase have given the car a more elegant look, the elongated rear balancing the 307's lofty roofline quite superbly. When configured in standard five-seat mode, the 307 SW is basically just the standard 307 Estate with a few clever lifestyle gizmos. What makes things interesting is when it's specified in seven-seat guise. Then it plays the mini-MPV role - or at least, that's the idea. Yes, space for all seven passengers is admirable but, like all such cars, you will have nowhere to put said passenger's luggage when you've filled it up. Having said that, if you need a mini-MPV and don't like the genre's traditionally fuddy-duddy image, this car could make a lot of sense. The 307 SW tries hard in the versatility stakes. Each of the rear seats are interchangeable which means that there are a suitably vast number of seating permutations. For legroom that would shame a Bentley, simply remove the middle row of seats or, if you've bought the five-door version, shift the three rear seats back a row. Alternatively you can take all the seats out to liberate 2,082 litres of space. As well as the 307's trademark huge windscreen, the SW also adds a panoramic glass roof that arcs back over the driver and first row of seats, rendering travel in the third row a putative punishment for any youngster who has coloured in the back of Daddy's neck once too often. With two trim levels available, S and SE, the 307 SW incorporates a number of MPV-style features and these include cavernous front door bins to carry a 1.5-litre bottle and sliding underseat storage trays. Fold down tables figure on the front seat backs and there are auxiliary 12v power sockets so that the young 'uns can be rendered silent by means of the Nintendo Cosh. With such an enormous glazed area, it's easy to imagine what it feels like to be a microwaved turkey drummer but fortunately the standard air conditioning system is well up to par. The 307 SW even features an air-conditioned glove box to prevent Mars Bars turning into reminders of your first trip to India and cargo nets in the hatch to stop luggage from looking like it's been on a spin cycle after spirited driving. 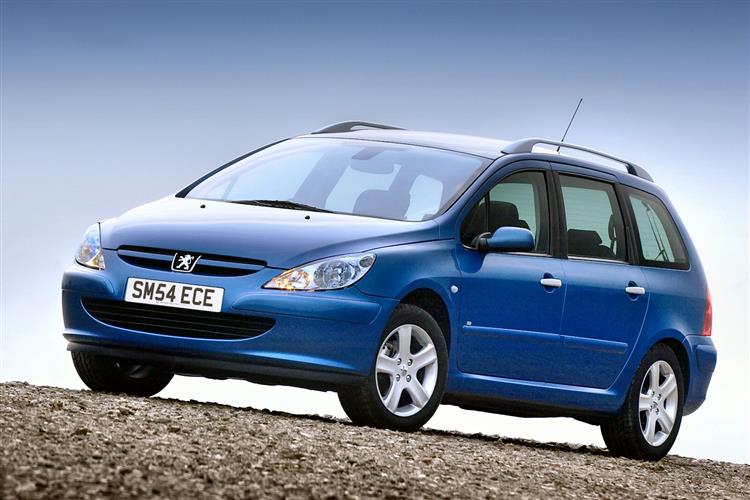