Looking more like something Harrison Ford would use for transport in Blade Runner than a lifestyle 4x4, the Nissan Murano was tough to fit into any accepted category when it beamed down in the UK in 2005. Propelled by by the same engine that powered the cultish 350Z coupe, the Murano was part sports car, part 4x4 and managed to confuse the heck out of potential buyers. Even now, Muranos are an uncommon sight on our roads. While it may have been a modest seller from new, does Nissan's mothership make better sense second time round?

Believe it or not, Nissan isn't the first Japanese manufacturer to attempt to sell a powerful, exciting petrol 4x4. Mitsubishi's 276bhp Pajero Evolution may have been cut from coarser cloth but it gave us an opportunity to see why this theme had never been tried before. While that sort of vehicle is great for taking on Paris-Dakar, it's not quite so at home in a country with fuel prices like ours. The Murano is equally powerful but when it was first introduced into dealerships in March 2005, it was sold not through a minor performance division but alongside Micras and Almeras in most Nissan dealers. In June 2006, the satellite navigation system was upgraded and the Murano's engine was tweaked to comply with Euro IV regulations. The biggest change was the unveiling of the turbocharged 340bhp Murano GT-C at the 2006 Goodwood Festival of Speed. Designed to offer ballistic intercontinental cruising abilities, this is a crossover vehicle to be reckoned with.

What You Getword count: 336

The Murano's combination of swoopy curves and diamond-cut edges combine well in a way that has eluded many reputed stylists. The nose is particularly interesting, offering a canted back cookie cutter grille with vertically stacked headlights. The nose is almost Micra-neat with tail lights that again evoke images of the 350Z coupe. The flanks have definite shoulders and a kicked up beltline and the details fuse into each other nicely as you walk around the car. Although the suspicion that all-round visibility was sacrificed at the altar of style is never far way, you have to admit the trade off was worth it. The interior measures up to what many would expect given the car's sharp suit. The dashboard offers three inset dials and a tilted centre console pod. Despite its low slung stance and narrow side windows, clever use of pale colours and a big sunroof means that the Murano still feels pleasantly airy. Rear seat occupants won't be complaining either, as there's a good deal of both head and legroom. Even the rear doors are reasonably proportioned. The Murano probably won't be your weapon of choice if outright luggage capacity is your goal, the raked tailgate cutting down on usable room. The cabin offers plenty of storage holes with a two-tiered lockable one between the front seats big enough for a laptop. The 'floating' centre console adds a sense of space to the reality and houses the standard 'Birdview' DVD satellite navigation system. Other deft styling touches include the remote flip-down rear seats and the instrument binnacle which moves with the steering column as it's adjusted just like it does on a 350Z. Unlike many other 4x4s, the Murano never came with poverty specification and an options list as long as your arm. Therefore Nissan didn't ask Murano customers to pay more for 18" wheels, xenon headlights, a leather interior, DVD satnav, a rear parking camera, darkened windows or a Bose 7 speaker audio system. You want all that? You've got it as standard. 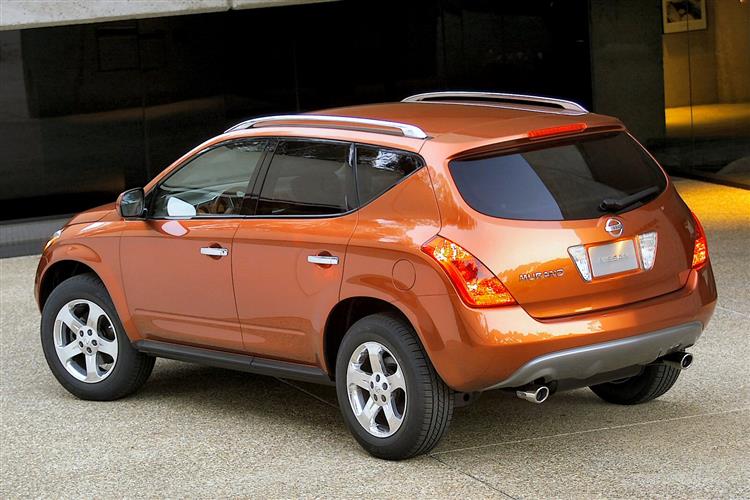