Subject to some fierce depreciation, the Mercedes-Benz SLR McLaren hypercar is now coming into the realm of the merely very expensive. Having garnered mixed reviews since launch, the SLR is an intriguing vehicle but one which isn't a low-involvement purchase. Wait a while to net true bargains. When Mercedes-Benz announced its intention to collaborate with McLaren on a hypercar, the results were bound to be spectacular. When it comes to sheer automotive theatre, the Mercedes-Benz SLR McLaren certainly doesn't come up short. As a driver's tool, it is crushingly effective. As an ownership proposition it's not quite so cut and dried. Used examples are now filtering onto the market having suffered quite swingeing depreciation.

The first thing to do when considering the SLR is to forget the McLaren F1. The SLR was never going to be a successor to the F1. As soon as the top brass at Mercedes decreed that for safety, marketing and manufacturing reasons, the car had to have its engine ahead of its driver, that much was set in stone. Many questioned the car's relevance not only in the face of more focused rivals from Porsche and Ferrari but also in the light of the astonishing performance served up by stablemates like the Mercedes SL55 AMG. The press launch, held in South Africa, resulted in questions raised about the car's ride, its braking and its relevance. Sales were initially fairly brisk, the car going on sale for just over £313,000 in April 2004, but this market isn't large and moneyed buyers are always looking for something faster and more outrageous. Cue Koenigsegg and Bugatti to pull the rug from beneath the SLR. Mercedes responded with the 722 Edition, a more focused version of the SLR that addresses some of its shortcomings but still never made a convincing sportster. Launched in early 2007 and packing 650bhp, the 722 was followed later that year by the best of the SLR stable, the Roadster. When the Roadster appeared, the SLR had sold just 1,200 of the planned 3,500 cars of the SLR line's projected seven year lifespan but top brass were bullish about its prospects and pointed out, rather triumphantly, that the SLR had seen off the Porsche Carrera GT and the Ferrari Enzo.

The technical details first. Up front is a hand-built 5.5-litre V8 supercharged engine. Actually up front may be something of a misnomer as the engine's weight sits behind the line of the front axle, making the car (in modern terms) 'front mid-engined'. Weight distribution has long been a pet obsession of Gordon Murray, the McLaren man largely responsible for the iconic F1 hypercar, and the SLR offers exemplary balance. In case you were wondering what occupies the space in front of the engine under that priapic bonnet, there are a pair of carbon fibre cones fully two feet long that are designed to disintegrate in the event of a head on collision, thus dissipating the shock loading. Standard equipment includes climate controlled air conditioning, an automatic gearbox, plus a superb CD stereo system that feeds seven Bose speakers. Satellite navigation, electric seats and an electrically adjustable steering column? Check. Tyre pressure monitors, automatic headlamps and front, knee, head and thorax airbags also feature. This ensures that the SLR weighs in at a hefty 1,693kg. The cabin is well finished, as you'd expect when paying this sort of money, but it is small and there are some surprisingly cheap plastics on display that should really be ball-burnished aluminium. A good deal of the 3,500 car production run has been bought by men of a certain age with a predilection for the finer things in life. Which includes food. Even if you're relatively limber, levering yourself into the confined cockpit, reaching back to haul the beetle wing door into position and adjusting the wheel and leather-trimmed carbonfibre bucket seat to get comfortable is still quite a mission. The Roadster's roof opens and closes semi-automatically in less than ten seconds and is offered in three colour finishes. Unclip the roof from the windscreen header rail and gently lift it and the electric motors will do the rest. The SLR always sported an exceptionally rigid chassis and the Roadster version is no exception, boasting a level of torsional rigidity that's beyond any other production drop top and is better than many esteemed sports coupes. It looks the part as well, the hood folding unobtrusively away, leaving a very sleek line. 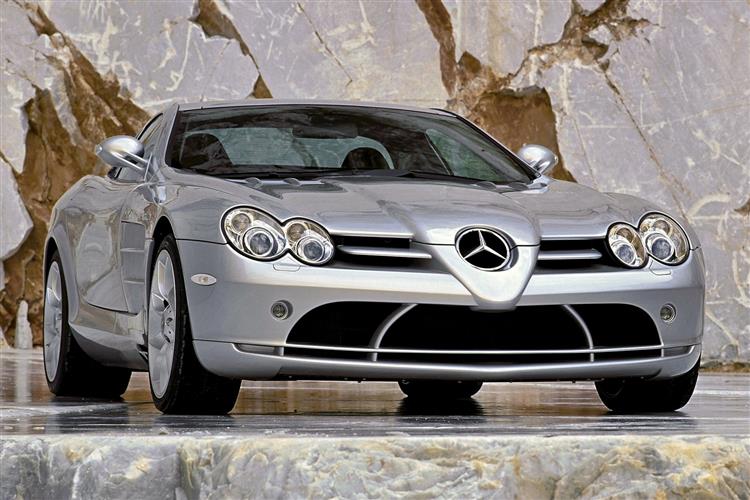