When it comes to premium convertibles, few can hold a candle to the Mercedes CLK. Beautifully built, extremely elegant and possessed of some of the best engines in series production, it's everything a high end four-seater drop top should be. As you would expect, demand is sky high, so be prepared to bide your time if you're looking for a used bargain.

The original CLK Cabriolet rapidly established itself as a car a cut above BMW's ubiquitous 3 Series Convertible in the drop top pecking order, its market position helped by the fact that neither BMW nor Audi built open-topped versions of their 5 Series or A6 models. The second generation car debuted in 2003 and shortly thereafter the CLK line up was re-jigged significantly. The CLK280 replaced the rather unloved CLK240, while a new CLK350 variant slotted in just below the CLK500 version. Somewhat curiously, Mercedes has never offered a diesel engine in the CLK Cabriolet (although they did in Europe), a strange decision given the diesel's success in the CLK coupe and the quality of engines in the marque's portfolio. In Summer 2005, the car adopted what Mercedes dubbed 'Direct Control' technology. This amounted to modified axle bearings, more direct steering and a shorter gearshift travel, offering a sportier, more dynamic feel to the car. Likewise, optional steering wheel gearshift buttons for models with an automatic transmission, revised audio units with Europe-wide navigation and bi-xenon headlamps with cornering light function were also introduced. Thanks to the seven-speed automatic transmission 7G-TRONIC (the first of its kind in the world), the fuel consumption of the CLK 500 was reduced significantly at crusing speeds. Stung by criticism of so-so interior quality, Mercedes also took steps to redesign many of the CLK's switches and controls. Trim changes included a redesigned front bumper and radiator, plus a smarter fascia for Avantgarde-trimmed models. In Summer 2006, a flagship 481bhp CLK 63AMG flagship variant was introduced with a 6.3-litre V8 putting the previous CLK 55AMG flagship in the shade. The CLK200K model was upgraded from 163 to 184bhp later that year.

So what do you get if you opt for the Cabriolet over a more conventional hard topped CLK? The hood itself was available in black, blue or grey and is probably the most sophisticated soft top around. No manual intervention is required and the whole process operates in a matter of seconds, the multi-layered hood vanishing beneath a flush cover at the back. Considerable work has gone into reducing the width of the rear hood pillars that has traditionally made reversing a soft top with the hood up a fingers crossed operation. The hood also offers class leading thermal insulation and noise absorption qualities. What's more, it can all be operated by remote control from your key fob as you approach your vehicle. The boot lid can also be opened by remote control and offers a cavernous 390-litre capacity, making the CLK Cabriolet a genuine touring car. This 40-litre increase over the preceding model reflects the fact that despite its trim styling, this CLK Cabriolet is a larger car than its predecessor. Headroom, elbowroom and knee room for all occupants was also usefully increased. As with any Mercedes, safety was given top priority. An array of sensors control the hidden rollover bars which can pop up to protect rear seat occupants in a fraction of a second should a catastrophic accident occur. There are also large head and thorax airbags in the front seat backrests while side bags for rear seat occupants are available upon request. Automatic belt feeders for the front seat occupants were fitted as standard and a sensor calculates the weight of the front passenger in order to tailor the deployment of the airbag. Other standard equipment included automatic climate control with rear seat outlets, rain sensing wipers, cruise control, a multifunction steering wheel and self-levelling headlights. Two trim levels were offered, as with the Coupe version (Elegance and Avantgarde). As ever, a dizzying array of high-tech options were available, including Keyless-Go, the COMAND APS navigation and audio system, the Linguatronic voice recognition system and the Distronic proximity sensing cruise control. 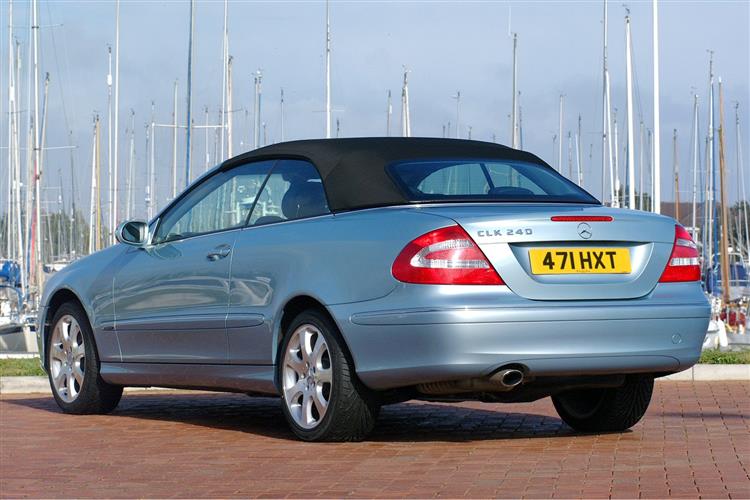