Executive estates left something to be desired before the arrival of the Mercedes C-class. You either opted for the sporty route and bought a car with very little carrying capacity or you chose a something with a practical amount of room but which handled like a lumbering barge. The BMW 3 Series Touring was having things much to itself at the sporty end of the spectrum until the arrival of the C-class estate in May 2001. With its sleek styling and sparkling chassis, the second-generation C-class offered a fundamental change in approach from C-class models of the past. The conservative blandness of the old car replaced by some adventurous design touches. One thing didn't change. As a used prospect, the C-class estate is still a superb investment.

The Mercedes C-Class estate's entrance to the market was eased significantly by the positive publicity generated by its saloon counterpart which had been on sale for a year by the time the estate arrived. The range kicked off with the C180, a 129bhp four-cylinder estate and also included the 163bhp C200 Kompressor, the 170bhp C240, the 218bhp C320 and two diesel models, the 143bhp C220CDi and the punchy 170bhp C270CDi. A rocketship C32AMG estate was launched in late 2001 while in autumn 2002 all four cylinder engines were replaced with greener, more frugal 'Twinpulse' units. A revised C-Class estate model was launched in 2004 with a C55 AMG model heading up the range. The C-Class estate engine range was given a thorough overhaul in the summer of 2005. The C230K was replaced by a C230 with a V6 204bhp powerplant instead of the supercharged 1.8. Above that, a 231bhp C280 was introduced and the range-topping C320 became a C350 with 272bhp. On the diesel front, the 224bhp C320CDI came in at the expense of the C270CDI.

What You Getword count: 470

The old version was hardly a removal van but this one will appeal even less to grandfather clock-toting antique dealers (who will continue to buy the larger E-class station wagon). After all, carrying volume apparently fell from 665 to 470 litres with the seats up and from 1,510 to 1,384 litres with them folded own. These then, are the facts - or are they? Mercedes says not. For a start, the company claims that though the ultimate size of the carrying area may have fallen, the usable space on offer has actually increased. So though this car may ultimately be able to carry fewer golf balls, it will certainly accommodate a larger box. Which is why the payload capacity has actually been increased (to 525kg), the overall length increased by 25mm and self-levelling suspension included as standard. In any case, even what space is on offer is vastly more than some of this car's key rivals. A BMW 3 Series Touring manages 435 and 1345 litres and as for Alfa Romeo's 156 Sportwagon, well don't even bother getting the tape measure out. All these cars are what we've come to know as 'lifestyle estates', cars more likely to carry a gym bag than a Great Dane. People buy them for the same reason they take out Health Club memberships they hardly use: to offer the possibilities of a more active lifestyle without actually having to pursue it. In designing this version of the latest C-class, Mercedes couldn't ignore these people, leaving their designers the thankless task of having to try and combine sense with style. All things considered, they've really done rather well. To try and make up for the ultimate lack of inches, the candles have been well and truly burnt in a bid to make the most of what there is. There's a sturdy folding shopping box that lives under the load floor and a luggage cover (which moves with the seat back) incorporating a roll-up safety net to stop loose items flying forward under sharp braking. The headrests flip neatly up out of the way when you fold down the rear bench, which either flops onto the cushion or folds completely flat when the cushion has been lifted out of the way. Lift the electrically operated rear tailgate and the floor stretches before you - up to 2650mm with the front seat folded, which should be useful if you've a ladder or a surfboard to carry. Moreover, as Mercedes promise, the floor space itself looks eminently usable, spoiled only at the side by slightly intruding suspension turrets. At the business end, the floor is right down at bumper level, flush with a stainless steel loading sill for easy ingress of heavy items. Once inside, they can be lashed down using chrome hooks anchored to the boot floor. 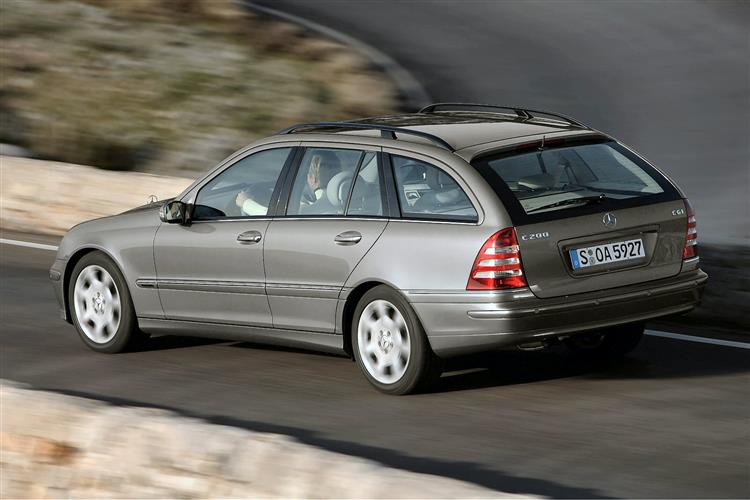