AWAY IN A RANGER (some text hidden)

If yours is the kind of family that could strip the average MPV down to its constituent parts in a matter of minutes, you need a form of transportation that's altogether more robust. Ford's Ranger pick-up may not have the cuddly persona and clever gadgets of family vehicles designed for the purpose but it's certainly tough. It's also surprisingly practical for the active family and pleasantly cheap on the second-hand market.

The early part of the 21st century saw a dramatic change in the UK pick-up truck sector. Before this period, the pick-up had remained well below the radar of most motorists, the preserve of farmers and tradespeople in need of a tough working vehicle capable of besting difficult offroad terrain - usually with a dirty great load in the back. Then the introduction of benefit-in-kind company car taxation in 2002 sparked a minor revolution. Under the new system, company cars were transformed from desirable perks to expensive luxuries. Only higher mileage drivers could really justify running one on financial grounds and many opted out of their firm's scheme completely, taking a cash handout instead. In this climate, the pick-up truck lucked into a position of prominence. Its tax status as a commercial vehicle meant that company car divers could run one and bypass the benefit-in-kind tax system while small business people could do the same, reclaiming the VAT on the purchase price as well. This loophole sparked the pick-up truck's UK market heyday and the Ford Ranger was at its forefront. This Ford Ranger is not to be confused with the North American model of the same name. Where as the US truck was developed by Ford themselves, the 'International' Ranger sold through official channels in the UK was developed by Mazda and built in Thailand. The model we're concerned with here is actually the seventh generation of Mazda's B-Series pick-up rebadged with the blue oval insignia. In the form that arrived in showrooms during May 1999, the Ranger was very much a rough and ready commercial vehicle but when the tax loophole emerged in 2002, Ford rushed to capitalise on the burgeoning pick-up market. The XLT high specification derivative had been available from 2000 and there was the unmistakable XLT WRR (World Rally Ranger) with its over-the-top Martini sponsorship livery from the Focus WRC car. It was the 2003 facelift however, that really placed increased emphasis on comfort and refinement. The post 2003 facelift models feature a more prominent chrome grille, revised bumpers and improved interiors while the XLT derivatives really boosted the equipment quota. The Ranger remained some way off the pace set by Mitsubishi's L200 and Nissan's Pick-Up but it was competitive. The Thunder special edition models offered leather trim and chrome detailing to spruce up the exterior. 2006 saw another facelift and a new common-rail diesel engine that represented a massive improvement over the old lump. Tweaks to the suspension enhanced the on-road driving experience making the Ranger vastly better on the tarmac. The interior also came on leaps and bounds with a much higher quality feel and the plush Thunder models became part of the mainstream range.

Throughout its various facelifts, the Ranger never really ranked amongst the class leaders in the pick-up sector. Each bout of improvements that Ford visited on the car came that fraction too late, the game having already moved on with products from Nissan, Toyota and Mitsubishi acting as pace setters. That said, the Ranger still sold strongly, its success built on the back of goodwill amongst commercial vehicle buyers reflected from the ever popular Transit van models as well as on Ford's large network of specialist van centres. The range, from the off, was comprised of single, Super and Crew cab offerings. The two-door single cabs have just two seats and a loadbay, the Crew cab is a conventional four-door double cab with two full rows of seats and the Super cab sits someway between the two. From 1999, the Super cab Rangers offered a pair of folding cinema-style seats behind the driver and front passenger so that the space could be used for secure storage when they were empty but in the 2003 facelift, the bodystyle was redesigned. These models retain the fold-up seats but have a pilarless cab design with reverse hinged doors for improved access. The Ranger can certainly pull its weight with payloads in all basic models up over the 1,100kg barrier and every single Ranger capable of coping with 1,000kg. As with all pick-ups, the offroad suspension makes for a high loading height so getting weighty items on board can be a struggle but the tailgate drops down flat so that they can be slid inside. Although the early cars feel utilitarian inside, the 2006 Ranger's interior reflects the demand at the time for pick-up trucks as business vehicles that can also double as family transport on weekends. Angular styling themes are carried over from the exterior with chrome detailing very much in evidence on the higher-spec derivatives. Much thought was given to the provision of storage space: there are no fewer than five cup holders, a pull-out tray in the instrument panel and two deep storage bins in the centre console to keep your odds and ends in check. The popular Thunder high-spec derivatives appeal to buyers who really want to push the 'lifestyle' boat out. These feature a tubular sports bar to beef-up the front end, chrome side sills, leather seats, a six CD stereo and air-conditioning, amongst other things. All Ranger models get twin front airbags and seatbelt pre-tensioners with further safety equipment available from the options list. 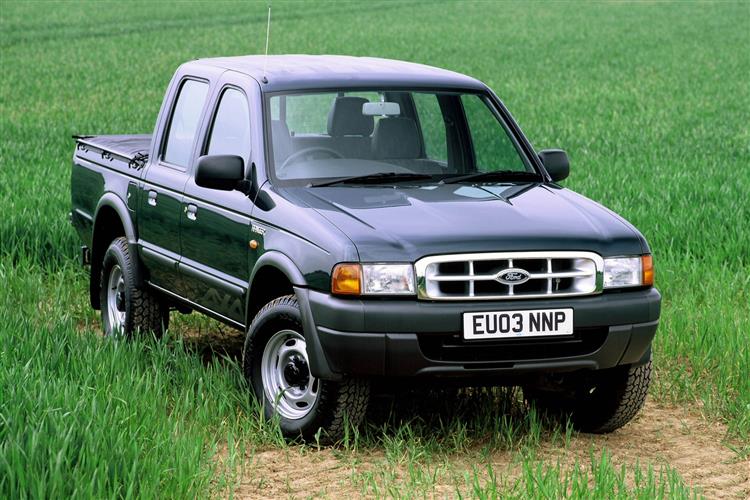