Looking for a big car on a small budget? Then you'll probably already know where to look first. Ford's Granada offers a lot of car for the money - no question. Nor is there any lack of choice. The Granada was replaced by the questionably styled Scorpio. In its heyday, however, a trip along Britain's motorways could easily have convinced you that the blue oval's flagship was Britain's best selling car. Back in the late Eighties and early Nineties, a Granada was a mark of faithful service for the middle management reps whose daily task was to pound around round to Potters Bar. A mild (or not so mild according to model) pat on the back for years of successful sales targets. Even today, Henry's big saloon is a common sight. However, the drivers at the wheel are second-hand buyers who've bought into big car motoring for supermini money.

The 'rounded shape' Granada, with its flush-fitting glass, made its debut in 1985, a large five-door car with a huge interior. Initially, the engine line-up was unremarkable; underpowered 1.8 and 2.0-litre four cylinder units; 2.4 and 2.9-litre V6s. Plus a nasty, noisy 2.5-litre diesel. The 1.8 and 2.4-litre variants didn't last long fortunately, and the carburettor 2.0-litre gave way to a fuel-injected engine of similar size in 1990, when a saloon was also added to the line-up. There was also a 4x4 option on 2.9-litre models, which lasted between 1987 and 1990. At the beginning of 1992, design specialists IAD masterminded a restyle which actually looked quite handsome. An estate was also announced at the same time and a 2.5-litre turbo diesel launched a year later. The range was replaced by the bug-eyed Scorpio (essentially a Granada with new nose, tail and cabin styling) in 1994 but you'll find lots of 1995-registered Granadas about.

What You Getword count: 37

A rather dowdy image but a lot of car. Arguably, the later Granadas were pretty good looking; they were certainly huge inside and very well equipped. The major drawback is the fuel consumption and high insurance premiums. 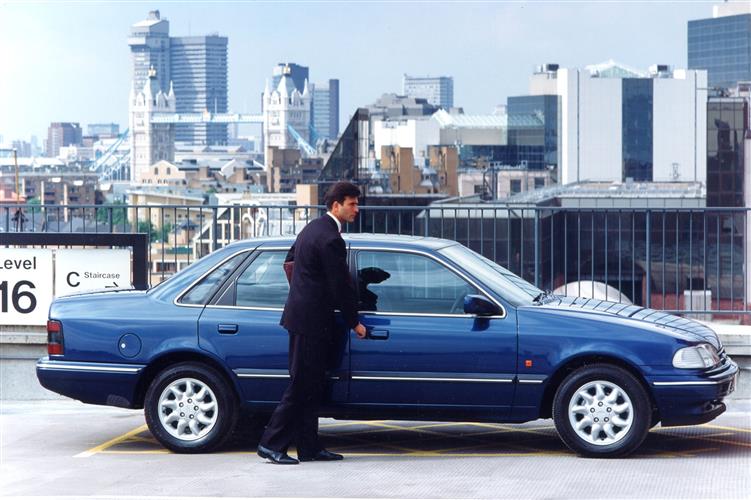