Ferrari is a company unaccustomed to second best. Awash with money, it will stop at nothing to achieve superiority. The trouble is, there's a very well bankrolled outfit just down the road called Lamborghini who have proven something of a meddlesome irritant to Ferrari. Their Gallardo comprehensively aced Ferrari's 360 but the senior suits at Maranello put on their best poker faces and observed the omert . When it was finally unveiled, their F430 was quite some riposte. Some vehicles are stress-free buys second time round but Ferraris rarely fall into that category. Is a used F430 a viable proposition or merely a diverting way of setting banknotes aflame?

Before the F430 arrived in the UK in 2005, the 492bhp Lamborghini Gallardo was making its predecessor, the 360, look rather quaint and even the racy 360 Challenge Stradale version was launched only just in time to be battered into submission by Ford's GT supercar. The problem Ferrari faced was that unlike, say, Porsche they couldn't turn up the wick on a turbocharger to release a mountain of extra horsepower. The 360's 3.6-litre normally aspirated engine was already squeezed until the pips squeaked to produce 400bhp. The company knew that the answer lay in more capacity. The F430 - as the name suggests - features a 4308cc engine derived from that which powers the Maserati Coupe and Spyder models. Like its predecessor, it employs a flat-plane crankshaft which means that the peak power of 483bhp comes at a heady 8,500rpm, in turn guaranteeing one of the greatest automotive soundtracks in the world. Lessons learned in the development of the 360 Challenge Stradale also pared weight from the F430 body with the result being a power to weight ratio of 333bhp per tonne. This put the Gallardo (324bhp per tonne) and the Porsche 911 Turbo (246bhp per tonne) firmly in their places. Unveiled at the 2004 Paris Show, the F430 was initially only available in Coupe guise but a Spider version appeared at the following year's Geneva Auto Salon.

The aluminium chassis is draped in lightweight alloy body panels. Carbon ceramic brakes are offered as an option and many 360 details remain, such as the basic suspension layout and that glazed-in engine window at the rear. Electronically variable dampers akin to Maserati's Skyhook system debut and the geometry and assistance of the rack and pinion steering have been sharpened. One area where the 360 Modena disappointed slightly was in the rather uninspring design of its interior. The F430 makes great strides in this regard, Ferrari's American design chief Frank Stephenson concentrating on quality and detailing. In a Formula One design cue, the steering wheel features a knob that controls the dynamic settings. Unlike an F1 car, this includes a 'winter' setting alongside those of 'sport' and 'race'. There's also an 'engine start' button on the wheel which seems a little gratuitous. The fascia is trimmed in leather and the alloy pedals are beautifully finished. The exterior lines are purposeful rather than beautiful. The 360 was no great beauty, many lamenting the F355 and 456 as the last of the truly handsome Ferraris and the F430's silhouette is an evolution of the 360 shape. The shape of the intakes and the headlamps are the key visual cues while the rear end features Enzo-style tail lamps that jut through the line of the rear deck. Much of the serious aerodynamic work occurs beneath the car. A flat undertray and rear diffuser help adhere the car to the tarmac. Look closely and there is some very tasty detailing, including the monogrammed rear view mirrors and the fantastic alloy wheels. 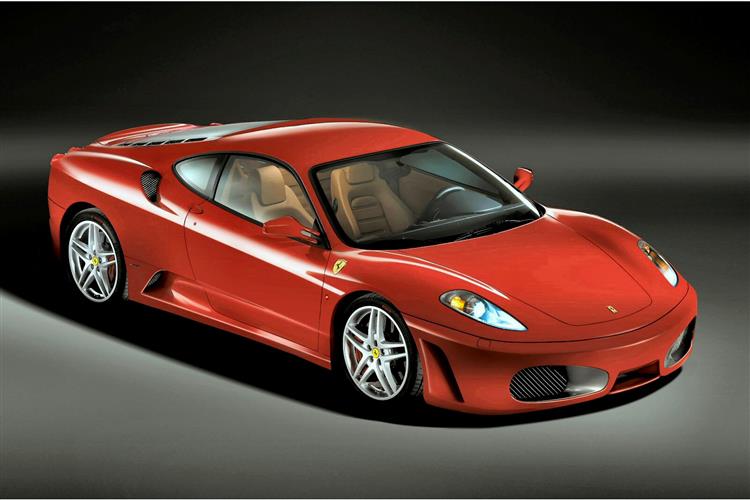