DON'T LOOK BACK IN RANGER (some text hidden)

Ten years is a long time for a modern motor vehicle to be in service but if you can get away with it anywhere, it's in the pick-up truck sector. Here, toughness and reliability are prized highly by buyers while the latest newfangled technologies can be happily done without, if the price is right. Ford's Ranger is a case in point. The big pick-up has been facelifted more times than the population of Beverley Hills but was still displaying mostly original features in 2006 when the version we feature here made landfall.

Launched in 1999, then refreshed in 2003, 2006 and 2009. The Ford Ranger is a stalwart of the UK pick-up market. Was this a case of Ford, having flogged the dead horse, nailing on some new shoes and applying a dash of lipstick? Or was the Blue Oval merely tweaking its charge ever closer to perfection? The answer, as ever, lies somewhere between the two extremes but what anyone looking for a good value used pick-up will want to know is where? If anything, the Ranger actually grew more competitive against its, predominantly Japanese, rivals as time went on. Around the time that this version was launched in 2006, the likes of Nissan's Navara, Toyota's HiLux and Mitsubishi's L200 were being unveiled in all-new guises. Ford's answer was not to go back to the drawing board to develop a new Ranger but to book the existing one in for life saving surgery. Unlike those made in 2003 and 2009, the 2006 revisions extended far beneath the skin of the Ranger. They ran to revised suspension settings and, crucially, an all new common-rail diesel engine. The interior was also vastly improved and together, the changes propelled Ford's effort into contention at the head of the UK pick-up class. A little later on, the Ranger line-up was supplemented further by the arrival of a 3.0-litre common-rail diesel engine to complement the entry-level 2.5-litre unit. The death knell sounded for this version of the Ranger in 2009 when Ford saw fit to tinker with the lights and grille but the basic package was deemed good enough to continue into the new decade without further alterations.

What You Getword count: 308

The Ranger range was comprised of single, Super and Crew cab models. The two-door single cabs have just two seats and a loadbay, the Crew cab is a conventional four-door double cab with two full rows of seats and the Super cab sits somewhere between the two. These models feature cinema-style fold-up seats in the back that allow the space to be used for storage when they are empty. They are combined with a pilarless cab design with reverse-hinged doors for improved access. The practicality of the Crew cab ensured it was the biggest seller. The 2006 Ranger looks tough enough. The large rectangular grille is bisected by two thick horizontal bars and framed on each side by big rectangular headlamps. Below, the chunky bumper juts out from the bodywork with a wide central air intake and deeply recessed fog lights. The interior reflected the growing popularity of pick-up trucks as business vehicles that can also double as family transport on weekends. The workmanlike decor in the pre-2006 models could no longer cut it. Angular styling themes are carried over from the exterior with chrome detailing very much in evidence on the posher trim levels. Much thought was given to the provision of storage space: there are no fewer than five cup holders, a pull-out tray in the instrument panel and two deep storage bins in the centre console to keep your odds and ends in check. Ford offered the popular Thunder and Wildtrack high-spec derivatives for buyers who really wanted to push the 'lifestyle' boat out. Both are well equipped. The Thunder, for example, features a tubular sports bar to beef-up the front end, chrome side sills, leather seats, a six CD stereo and air-conditioning, amongst other things. All Ranger models get twin front airbags and seatbelt pretensioners with further safety equipment available from the options list. 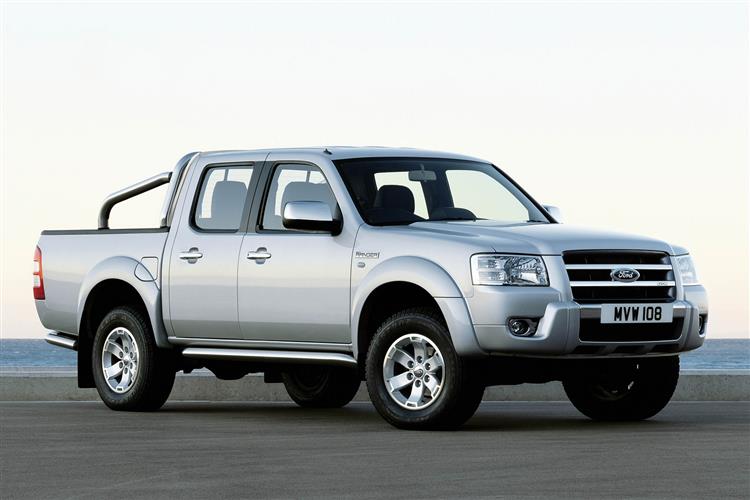