A ROOF OVER YOUR Z (some text hidden)

Although it may not have its predecessor's ability to drop your jaw or that car's Marmite 'love it or hate it' appeal, the BMW Z4 Coupe is nevertheless an arresting sight. It's the old school recipe of long bonnet and a squat cabin that hunches on its haunches which gives the Z4 Coupe the almost caricature visual effect of all its power being stored up like an Acme bottle rocket from a Road Runner cartoon. It just invites you to jump in and light the blue touch paper.

When the Z3-based M Coupe was first unveiled in 1998, it came as a bit of a shock to the system, especially as BMW seemed to be moving towards more civilised and, some said, sanitised cars. Its development history is interesting. A team of hardcore driving enthusiasts at BMW's Research and Development Centre felt that the M roadster wasn't extreme enough for their liking. Working after hours, they stripped the wings off a Z3 roadster and sculpted a coupe body. It's tempting to imagine that they neglected to adequately ventilate the studio and lost all power of reason due to the fumes from the sculpting foam, but that's not the case. The design they came up with was shocking, challenging and quite unlike anything BMW had ever produced. It's also a modern BMW classic. Fast forward eight years and BMW reprised the M Coupe theme, albeit with a little more restraint. The Z4 Coupe was, unlike its predecessor, available in this country in non-M guises as well as the range-topping Z4 M tarmac stripper from Garching. This range of cars came at an ideal time for BMW, facing down a rejuvenated Audi TT and the Nissan 350Z. Add the Porsche Cayman and the Alfa Brera to that mix and it's clear that 2006 was a boom time for sexy-looking coupes. Two engines were offered from launch, BMW's ubiquitous 3.0-litre straight six and the 3.2-litre unit from the M model. The 3.0-litre models were badged 3.0si and came in SE or Sport trim. The Sport model features the firmer M-Sport suspension that was standard on the Z4 M. The open-topped Z4 roadster models had already been around for three years when the coupe arrived. When both cars got the axe in 2009, they were replaced by a new dual purpose Z4 with a folding metal roof.

Everything about the 3.0 Z4 Coupe is built from solid foundations. Instead of trying to make a compromised platform work, BMW has got the basics right. The rest is easy. Pop the bonnet and you'll notice that the engine is set well back behind the line of the front axle for excellent weight distribution and keen turn-in. It's hard to recall but it's worth noting that many were unconvinced by the styling of the Z3 when it was first launched, BMW later carrying out a series of design tweaks to remedy the perceived inconsistency between the pugnacious front and the apologetic tail. The Z4 had no such problem. It was unconventional all over. Most of the attention was paid to what designer Chris Bangle described as the 'flame surfaced' flanks. These feature a curved line along the bottom of the doors that at first looks as if the car's sills have collapsed. Give it time and you'll get used to them. Everywhere you look, there are details that catch the eye, sometimes clashing in a 'look at me' clamour. It's not a beautiful car, but it's certainly strikingly muscular, especially in Coupe form. The cabin has plenty of room for two but there are no rear seats so you'll rely on the boot for luggage capacity. BMW claimed that you could fit two sets of golf clubs in the rear but it would be a struggle. You might have to pass them through an industrial wood chipper first. The interior design is typical of BMW products from this era. Minimalist, well built and without too much to catch the eye. 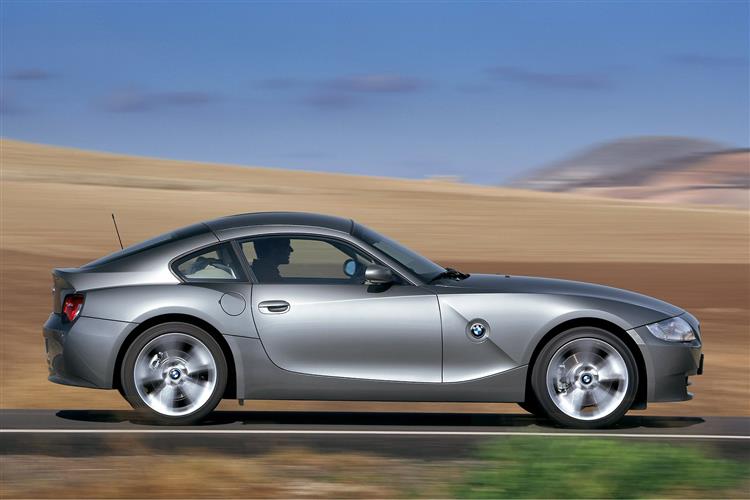