BMW has launched a lot of great cars in recent years. The M3, the 330d, the M-Coupe, the 130i and the 535d are all cars that have wormed their way into our affections by dint of their sheer excellence in engineering. BMW aren't always wholly consistent though. For every cracker, there are models that receive rather less rapturous acclaim and to this list can be added the X3. A car that never really captured the public's imagination, the X3 has been saddled with a reputation of being at the same time expensive but apparently built down to a price. While this means that new sales have been unspectacular, the used market tends to level out issues like this, the market valuations often changing prevailing opinion of a car. That which was overpriced when new can become a real bargain when used. Does the X3 deserve this second lease of life? Find out here.

The X3 certainly got the big build-up. Its path had been paved by the phenomenally successful X5, a vehicle that changed the way we bought big 4x4s. With a track record like that along with the fact that the car was being built in a high-tech factory in Austria and would be launched into a compact 4x4 market in which Audi and Mercedes had no rivals, the X3 looked destined for instant success. Strangely, things didn't work out like that. Initial spy shots of the car that started appearing in magazines in early 2003 showed a nicely proportioned vehicle that looked like a shrunken X5. No problem there. The sharp intake of breath came when BMW announced pricing for the X3. In many instances the asking prices were just a couple of thousand pounds less than the equivalent engined X5. Put the two vehicles together and although the X3 was undoubtedly more modern and better packaged, the X5 felt a better built, more prestigious product. No wonder so many buyers paid £2,000 to go large. The X3 wasn't helped by the fact that no diesel option was initially offered, the range consisting of 2.0-litre and 2.5-litre petrol models only. Black lower body mouldings also proved a turn-off for many customers. BMW must be given credit for rectifying a lot of these issues very quickly. A 2.0-litre diesel arrived in September 2004 and this was followed up by a 2.0-litre petrol economy model in 2005 and a punchy 3.0-litre diesel. Body-coloured mouldings were also swiftly offered, giving the X3 a far more upmarket look. BMW were at it again in September 2006 when the engine range was significantly revised and the styling was updated. The 2.5si and 3.0si engines arrived with 218 and 272bhp respectively while a 3.0sd unit with 286bhp turned up at the top of the range - at the time, it was the most powerful diesel ever offered in a BMW. The styling changes ran to a larger front grille and a redesigned bumper/spoiler ensemble. Inside, the materials were upgraded and a three spoke steering wheel introduced while all models received DSC+ traction control. Further tweaks to the engine line-up came in September 2007 with the introduction of BMW's EfficientDynamics technology. This delivered fuel and emissions savings across the range with a headline-grabbing 43.2mpg attainable in the 177bhp 2.0d model. By the spring of 2009, the X3 had become cleaner still with the 46.7mpg of the 18d model which uses a 143bhp version of the same 2.0-litre engine.

The front features a lot of black plastic and the interior never looks or feels quite as 'hewn from solid' as the X5. All things are relative, however, and by the standards of the compact 4x4 class, the X3 is the best there is. That shouldn't be surprising given the prices asked from new. The range opens with the 123bhp 2.0-litre petrol model, then comes the 150bhp 2.0-litre diesel. The 192bhp 2.5i and the 231bhp 3.0-litre petrol versions were up-graded in 2006 to offer 218bhp and 272bhp respectively. This 3.0si unit will hit 60mph in 7.5s before accelerating on to 142mph. The 3.0-litre diesel models could be the most desirable in the range with 36mpg economy and 218bhp or a massive 286bhp in 3.0sd form. The 2.5-litre car is offered with a manual gearbox and the option of an automatic while the 3.0-litre petrol version is supplied solely with BMW's acclaimed six-speed auto transmission. Trim levels run from standard through SE and Sport to M Sport with certain engines restricted to the plusher trims. There are some rather unusual consequences of shrinking the car down to compact 4x4 dimensions. Despite featuring split fold rear seats that can't fold flat, the overall luggage capacity is actually more than an X5 and the simpler one-piece rear tailgate is a good deal more practical. The rear doors are narrow and make getting in and out without dirtying your strides on the black running boards rather difficult. The rear squab is also mounted very low and long legged passengers won't savour a long journey tucked in the back of an X3. Another consequence of the dinkier dimensions is a smaller fuel tank. Given that the X3 is only marginally more economical than an equivalent X5, the drop in tank size from 93 to 67-litres puts a big dent in its pretensions as a long distance mile-muncher. 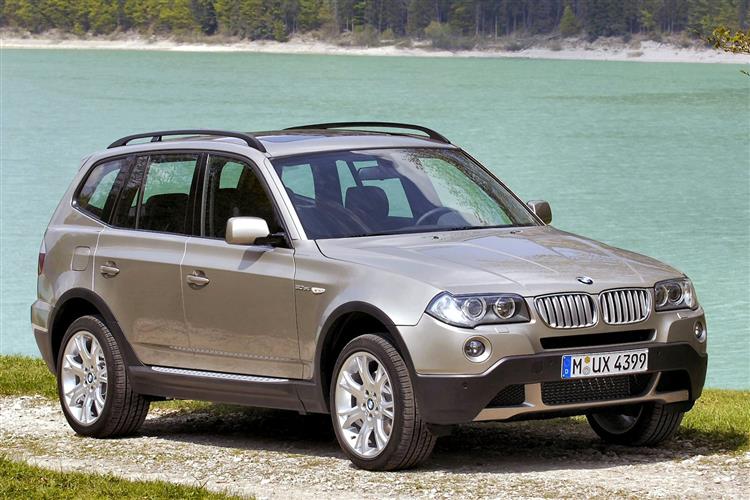