The third instalment in Ford's Mondeo dynasty made its debut alongside Daniel Craig's James Bond in Casino Royale and was soon gaining rave reviews in the hands of the nation's roadtesters. Ford was confident that reports circulating at the time which hinted at the demise of the medium range family car were grossly exaggerated and in 2007, at the wheel of the Mondeo Mk3, few people would have argued with that. The car offered sheer size, quality and Ford's trademark engaging drive, qualities which are just as desirable on the used market.

The very fact that a car was called Mondeo and had a blue oval badge on its grille used to be enough to guarantee big sales but by 2007 when the third generation model was launched, the market dynamic had shifted. Fleet and private buyers with Mondeo money to spend now had a vast array of alternatives at their disposal, including compact MPVs, compact 4x4s and premium brand hatchbacks. By comparison, the Mondeo and its medium range family car contemporaries were feeling a little staid. Ford's stalwart would have to work twice as hard keep pace and the monster sales figures of the past were all but out of reach. Despite what looked like a grim prognosis, the Mondeo MK4 rose to the challenge and set about reminding the public of why they used to love cars like this. This Mondeo arrived in the early part of 2007 sporting the 'Kinetic' design themes that Ford had been busily touting around motorshows for some years previously and which had already surfaced in showrooms on the S-MAX MPV. It would subsequently appear across the wider Ford model range over the coming years. The engine line-up was carried over from the Mk2 car in part, with Ford's 2.0-litre and 2.2-litre TDCi diesels taking centre stage and the 2.5-litre turbocharged petrol engine from the Focus ST providing strong performance at the top of the line-up. The entry-level engine was an advanced 1.6-litre Ti-VCT petrol multi-point injection unit with 109 or 123bhp. A full range of bodystyles was offered with saloon and hatchback versions that were tough to tell apart visually and an impressively roomy estate. Trim levels were familiar Ford stuff with Zetec, Ghia, Titanium and Titanium X but the Edge models formed the entry-point to the line-up. In mid 2008, the ECOnetic version was launched which used the 1.8 TDCi diesel engine and aerodynamic improvements to achieve over 53mpg. More changes were made to the range in 2010 with a 2.0-litre EcoBoost petrol engine with 200bhp arriving at the top of the range and revised 2.0 TDCi diesels in the middle. The Ghia trim level was dropped and emissions were improved across the board.

Take a seat inside the car and you'll notice high quality surfaces, materials and finishes. As with the outside, dynamic lines and styling curves are evident, plus the low profile instrument panel provides very generous cabin space for front seat occupants. The dashboard is clear and the major controls for the electronics systems largely intuitive, although the wood veneer finishes fitted to the Ghia models will have anybody under the age of 50 recoiling in horror and the Titanium overdoes the aluminium-effect plastic a little. The design team also paid great attention to interior detailing, and examples of this include clever infotainment systems, plus Ford's Human Machine Interface (HMI). This easy to use system features steering-wheel toggle switches which control the display on a large central LCD screen with full colour graphics situated between the main analogue instruments in front of the driver. Ford was clearly aiming at giving the Mondeo a more upmarket feel in line with the compact executive models from BMW and Audi. It ultimately falls short of those high standards but comes commendably close. Rear seat headroom and legroom are quite a revelation. The Mondeo is a seriously large car and it shares its size around to the benefit of all its occupants. The boot is also huge. Press the release and the tailgate of the hatchback model yawns open to leave you teetering on the precipice of a veritable pit of practicality. Family holidays, house moves or the weekend DIY blitz - the Mondeo will accommodate more stuff than you'd credit in any number of domestic situations. The estate is bigger and more practical still. 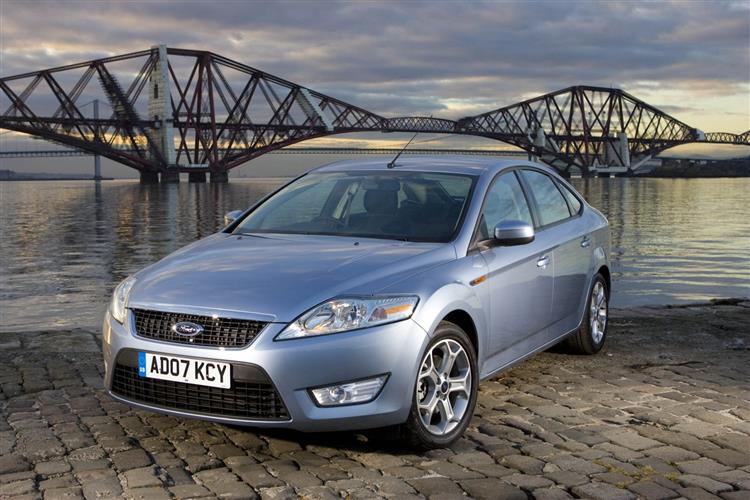