Beauty may be only skin deep but Hyundai's Coupe has long majored on some serious skin deep success. In its original form it found favour as a quirkily styled budget coupe that looked a good deal more expensive than it was. The driving characteristics weren't bad either, but as soon as you clocked the interior, it was apparent the little Korean was, in fact, nothing exotic. A facelift in 1999 somewhat spoiled the looks but it wasn't until 2002 when the second generation Coupe was launched that we could appreciate what Hyundai's engineers and stylists had been beavering away on. The current Coupe is a very handsome car indeed and now that a 2.7-litre V6 engine option exists, it can back up the looks with a charismatic powerplant. With very few demerits and a big quota of plus points the Coupe makes a sound used buy.

The Hyundai Coupe's reputation as the poster child amongst those looking for style without the expense was well cemented by the time the second generation car was launched in 2002. Few who were familiar with its predecessor could quite believe what an improvement Hyundai had made to the car. For years industry experts had berated Subaru to just get to grips with designing an slick interior and a sexy coupe body for the Impreza in order to make it a mega-seller, but to date it has proved quite beyond them. Hyundai showed how it should be done, the Coupe coming with a dash of Ferrari 456 about its proportions and a very tidily styled interior. True, the fit and finish wasn't quite in the Audi league, but when the car was priced from under £14,500 new few were complaining. Three engines were offered, an entry-level 1.6-litre unit good for 103bhp, a 2.0-litre that developed 134bhp and the full-on 165bhp 2.7-litre powerplant. With the top model costing just £18,495 upon launch, the Coupe soon proved very popular with UK buyers and received critical acclaim from many in the know. It's popularity was boosted by the 2005 model year facelift which saw new headlights included for an edgier look along with a revised front bumper. Overtaking presence was also increased by dint of some gaping air intakes that ape a Ferrari 360. A further facelift for the 2007 model year introduced spooky blue lighting for the instrument cluster and an iPod-compatible stereo while the front end was given a significant overhaul. You'll spot these cars by the longer, meaner headlamps, a thin 'letterbox' grille and a wide air-intake below that hides revised fog lights in its corners. The trademark side gills also have integrated side repeater lights. By 2009 the model range had been reduced down to only include the 2.0-litre engine.

The value proposition we come to expect from Korea. What we still view as something of a novelty is a car that can stand comparison with the best in class without taking the upfront price into account. That's where the latest Coupe is so impressive. Take the styling. That cutback side window and the arc of the roofline shout Ferrari 456, whilst the front-end treatment looks like the best post-millennial US-Fords. The rounded rear is still recognisably Hyundai, but the overall effect is far more cohesive and mature than anything the company has yet produced. You'll get a sense of dej vu when you see the vertical gill slats behind the front wheels. Where have they come from? They are increasingly appearing on many designs, the Range Rover among them, and are another styling feature filched from Ferrari, the 575 wearing a rather natty set. This somewhat shameless pilfering of other manufacturer's design cues continues inside. True, it's a pragmatic philosophy to identify what works for others and replicate it yourself, but you can't help but think 'Mondeo' when you see the clean metallic lines of the fascia. If anything, Hyundai have gone one further than Ford with some very neat touches. The central-mounted torque gauge is somewhat gimmicky but it's interesting for a few minutes to see the torque swell as you ascend the rev range. Interior space isn't bad if you count the rear seats as occasional items. The only grumble is headroom, which can be an issue if you're much over six feet tall. If so, don't opt for the sunroof, as this exacerbates the problem. Otherwise front space is generous and the big boot serves up a welcome dose of practicality. 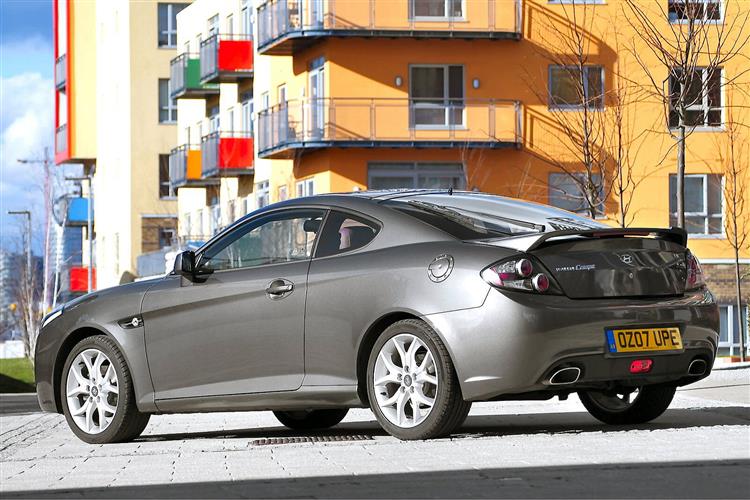