It's hard to believe the Mondeo has been with us since 1993. Perhaps this is due to the fact that it never had the difficult gestation of cars like the Sierra, Cougar, Scorpio and Ka, models that took time to gain popular acceptance. There was never any rocky probationary period in the public's view of the Mondeo. The press loved it and major award followed major award, including the European Car of the Year title for 1994. Yes, it may have initially been dubbed the Mundano by some wags, but that's only because it didn't represent a quantum leap in styling in much the same way that the Sierra was a generation on from the Cortina. Despite the evolutionary lines, the Mondeo was streets ahead under the skin and represented a constantly moving target that Vauxhall's Vectra never managed to come to terms with. Oversupply ensured that there were plenty of used bargains about, and it pays to shop around to find one that's right for your needs, so take your time, look at a few and bargain hard.

Just as the once controversial Sierra was being subsumed into the mainstream, Ford announced the Mondeo to replace it in February 1993. Initially, there was a choice of three petrol engines - a 1.6, a 1.8 and a 2.0-litre, all 16v units. There was also a 1.8-litre turbo diesel. Two spacious bodystyles - a five-door hatch and a saloon - were offered at launch and estates followed a few months later. Specifications? Well, they followed the established Ford path, ranging from base (latterly Aspen) and LX through GLX to Ghia. All were highly specified, with even entry-level cars featuring a driver's airbag, tinted glass, power steering and an alarm system. Immobilisers were added in August 1994. In October 1994, a V6 24v variant was added to the range in all three bodystyles, with base, Si, and plush Ghia spec. By this time, you could identify all Ghia models by their bright chrome front grille. In January 1995, the Aspen (previously a special edition) became the entry-level model. In April 1995, 2.0-litre 4x4 models were introduced (but lasted less than a year), while in October 1995, Ghia X flagship spec was added as an option for all but 1.6 and 1.8-litre petrol models. This allowed Ford to reduce the price of Ghia variants (they also reduced equipment so air conditioning became optional instead of standard).

The Mondeo has had its share of hype - but in this case, it's been well deserved. If all that PR is enough to get you behind the wheel, you won't be disappointed. Apart from the standard airbag, there is enough technology built into this car to make it a real driver's machine. Even the most basic Mondeo is pretty well equipped. On most later LX models (by far the best sellers), you'll find central double locking and Ford's clever 'Quickclear' windscreen. That's in addition to driver's airbag, power steering, anti-theft alarm with immobiliser, tinted glass, adjustable steering wheel, 'lights-on' warning buzzer, electric front windows, a tilting/sliding sunroof and a good quality stereo radio cassette. You're unlikely to be excited by the computer-aided styling of the first generation version, but you won't be offended by it either. In fact, the complete car is a fine piece of design, particularly inside where the elegantly curved dash and door casings are well constructed from sound materials. 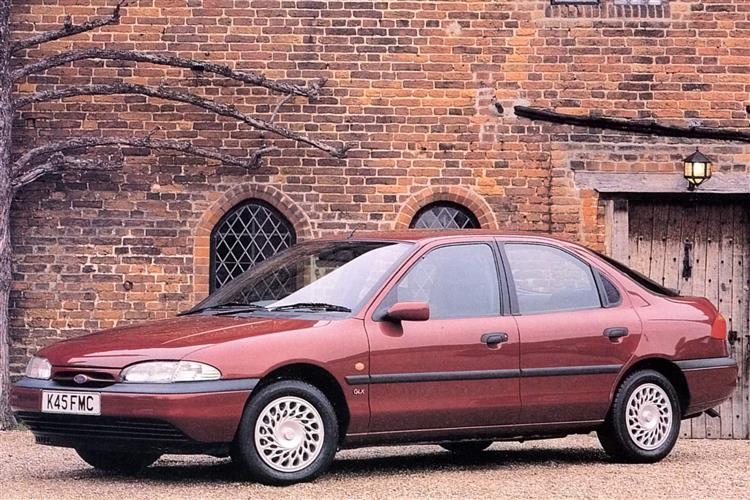