CHAPTER AND VERSO (some text hidden)

Was a vehicle ever so cruelly overlooked as the Toyota Corolla Verso? Whilst its hatchback siblings were being lauded as cars you could be proud of, the Verso mini-MPV received the cold shoulder from UK buyers, many of whom were ignorant of its very existence. Offering a little more space and versatility than a regular family hatch, the Verso is a car that may not seem the most exciting choice around, but is an enormously endearing and reliable partner: a grower, if you like. With three engines and three trim levels to choose from and not a huge amount on the roads, getting your exact choice may well be difficult but stick with it. The Verso is worth it.

It seems a little odd to think that Toyota used the Corolla Verso as the car to establish a beach head for the Corolla Mk 10 in the UK, subsequently following it up with three and five door hatches and four door saloon versions. Odd, that is, because it was then given so little in the way of marketing back up, left to wither in the face of the overwhelming sales superiority of cars like the Citroen Xsara Picasso and the Vauxhall Zafira. T2, T3 and plush T Spirit models were offered with a choice of either a 110bhp 1.6-litre powerplant or a 1.8-litre 133bhp engine. By far the most satisfying option, however, was the 90bhp D4-D diesel unit. The face-lifted Corolla Verso went on sale in late Spring 2004. Engines and trim levels remained unchanged but there were thorough revisions to the interior and exterior styling. Sharper light clusters front and rear were complimented by a sleeker, thinner front grille and bumper ensemble.

The fact that the Corolla Verso's engineering is superb can be taken as a given, as is the fact that the interior layout is so clever you'll wonder why Toyota designers don't turn their hand to simpler matters like the Middle Eastern peace process. The styling may well divide opinion. Whilst many manufacturers have only recently realised that MPV-shaped vehicles don't actually need to look odd, Toyota's offerings are somewhat rich in visual character. The Corolla Verso is no exception. Designed in France, it doesn't fare too badly from the front and rear, but the profile features the same sort of fractured-spine penmanship that prompts concerned pedestrians to ask whether you can wiggle your toes as you sit waiting for the lights to change. Not since the Alfa Romeo 75 have we seen quite such a kinky window line. Toyota have thankfully resisted the temptation to squeeze seven seats into the Corolla Verso, rendering it suitable only for Snow White's entire dwarf away team, instead sensibly opting for a more pragmatic five berth layout. As would be expected, the rear seat can tumble, recline, slide backwards and forwards or even be detached by a 60-40 split. Two junior rear seats are built into the rear seat and ISOFIX mountings allow the easy installation of two compatible child seats. The centre back of the rear seat can even flip down to serve as an armrest with two cup holders. The traditional bugbear of MPVs, namely that with a full complement of passengers there's nowhere for the luggage to go is partially addressed by the Corolla Verso. With 473 litres of space even with the rear seats in situ, the Verso certainly does well on paper. In real terms, you'll need to stack up some quite rigid luggage to exploit this space and a meaningful number of carrier bags will leave the weekly shop looking decidedly dog-eared. 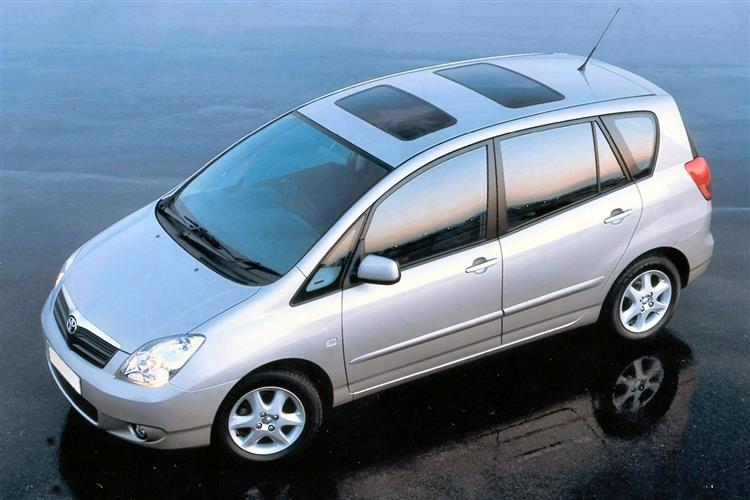