WORD ON THE STREETKA (some text hidden)

Find yourself in the market for a used supermini convertible and you tend to be faced with a run of depressing choices. You can either opt for the sort of hatchback conversion that looks like a pram or you can opt for the sort of 'sporting' coupe-convertible car with folding metal roofs that tend to malfunction, leaving you drenched in the throes of the British 'summer'. Most give up on this sector and buy a proper roadster such as an MG TF or a Mazda MX-5 but salvation arrived in 2003 in the pert shape of Ford's Streetka. It was small, it looked the part and it was fun to drive. Was that really so difficult? Tracking down a used example may be a little more difficult than working up the enthusiasm in the first instance. Although the Streetka sold in decent numbers, owners seem strangely unwilling to divest themselves of the baby Ford. Your best bet may well be a low mileage demonstrator from a Ford franchised dealer. Don't expect too many outrageous bargains even if you do choose to buy in the traditional convertible 'dead period' in late autumn.

Quite why it took fully seven years for Ford to realise that a convertible Ka might make hot cakes look a sticky line is anyone's guess. Designs for the Streetka had been circulating within the Ford empire for years before a prototype ever saw the light of day, the Turin Show of 2000 being the first public airing for the design. Fortunately for us, Ford timed the production launch of the Streetka to coincide with the introduction into the Ka range of a decently powerful engine in the form of the 95bhp 1.6-litre Duratec. For years enthusiasts had raved over the Ka's handling prowess and begged Ford to give it more power. The Streetka retains a superb chassis balance and many feel that if a bigger engine would fit beneath that tiny bonnet, the Ka would be more than capable of doing it justice. Winter 2003 saw the launch of the Streetka Winter Edition, a limited run series that included a detachable hard top to keep out the worst ravages of the British elements. The StreetKa disappeared from Ford's new car range in 2007.

The standard Streetka is fitted with anti-lock brakes, a cloth roof, remote central locking, twin airbags, a height adjustable driver's seat, 16-inch alloy wheels, an alarm, power heated door mirrors, front fog lamps, a CD based stereo and electric windows. Should you want an even better equipped version, the Luxury Streetka adds leather trim, heated seats, height adjustment for the passenger seats, air conditioning and a heated windscreen. Options include metallic paint, a CD autochanger and a climate pack (air con and the heated screen). With seating strictly for two, the Streetka has an intimate feel to the cabin. Many of the interior parts are standard Ford fare, but the addition of a Puma-style metallic gearknob and some metallic detailing on the dashboard and the steering wheel jollies things up a little. Unlike most of today's state of the art roadsters, the Streetka does without an electric folding hardtop, relying instead on a manually folding soft top that can be stowed in less than 30 seconds. Beneath the roof mechanism is a storage space that can accommodate a golf bag. Another lockable box sits between the front seats giving a total stowage space of 188 litres. 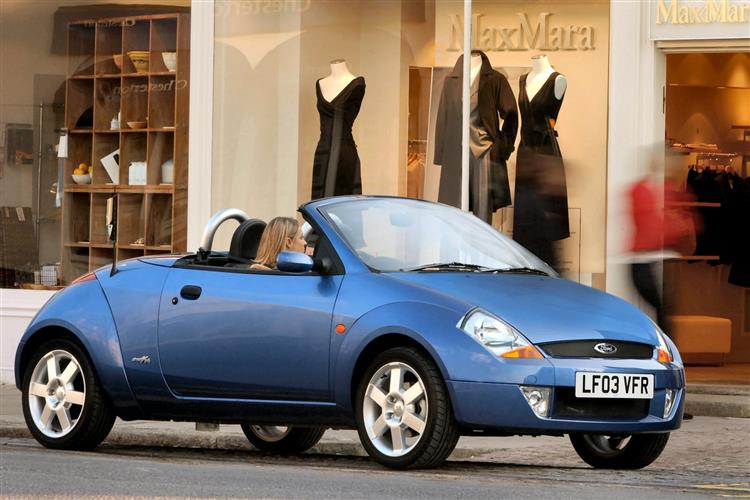