When Nissan developed the second generation Almera, it had to not only counter the threat from increasingly sophisticated European hatches, it also had to prove itself attractive in the face of competition from the burgeoning mini-MPV sector. Whilst the Almera Tino mini-MPV mopped up buyers unconvinced of the standard Almera's versatility, it certainly scored on the first criterion making a late used Almera far more in demand than the first generation car ever was. An affordable Nissan with inbuilt desirability? You'd better believe it.

Whilst the original Almera was a worthy offering, perhaps the British public took the initial advertising campaign somewhat at face value. Indeed 'The Car They Don' t Want You To Drive' was in fact scarily prophetic. If they didn't want us to drive it, who were we to argue? Besides, the prospect of driving a car with a roofline that resembled the flight deck of the USS Carl Vinson didn't exactly fill us with anticipation. The 2000 model year car changed the way we perceived the Almera. Gone was the gawky styling and uninspired interior. In its place was a car that was confident and mature with a far more European feel and fit and finish to rival anything emerging from Germany. Prices were very competitive and with a revised engine line up and a range of six standard trim levels as well as Activ value editions, the Almera has exceeded Nissan's modest expectations. In late 2001 a four-door saloon version was announced to a market which has traditionally shunned the idea of booted hatches. A year further down the line, Nissan facelifted the Almera, changing the bumpers and grille for a more Primera-like appearance. The trim designations were altered, pricing was made more aggressive, the engines were tweaked slightly and the Primera's N-FORM dashboard was fitted to all but the base models. Soon thereafter, Nissaan added a common-rail 136bhp 2.2-litre dCi diesel to the Almera line-up available solely in a new top of the range SXE trim designation. It also revisited the SVE trim level, adding DVD-based satellite navigation. In spring 2003 Nissan added a pair of special edition models to the range, the Pulse and the Flare. By the start of 2006 the Almera was starting to look decidedly dated next to modern family hatch rivals. The range was slimmed down to just one engine option (the 1.5-litre petrol) and four trim levels S, SE, SX and SVE. Although, Flare derivatives were still being sold at this stage. The last Almeras were sold early in 2007.

Inside, the Almera has moved up a class, with a quality feel reminiscent of something much more expensive. That probably won't be what you remember, however, after the sales person guides you round the 'super utility' interior which is filled with clever touches. Not all of them are new, but the way they're executed is better than anything family buyers have seen to date. There's the sunglasses holder by the rear view mirror trimmed in fabric so as not to damage the lenses with constant use. The centre console glovebox with a tissue holder built into the lid. A 12v power socket mounted on the console is as easily accessible by the kids for their Gameboys as by Dad for his 'phone. A 'curry hook' in the front passenger footwell for your takeaways that retracts when not in use to avoid snagging your legs. Storage spaces abound - there are over 20 around the interior - ranging from a washable rear garbage holder for sweet wrappers to sill trays sculpted for a can of de-icer and front door pockets designed to take thick atlases along with huge bottles of fizzy drink. There are two 'secret boxes' for valuables (one hidden under cup holders in the centre console and another beneath the rear floor) and a compartment for colouring books and pens built into the rear centre armrest (which also includes two more cup holders). Then there are the really unique touches. The twin luggage nets that hold oddments in the side of the boot that can be joined together and stretched across the load floor to stop larger items from sliding about. Then there's the umbrella holder - velcro straps that fasten the item to the front of the rear seat cushion. You can also fasten your briefcase or laptop computer in the same place, thanks to a retractable briefcase strap. The idea, says Nissan, was to make climbing into your Almera feel like coming home. Ambitiously, they also wanted the car to be one you'd feel proud to have sitting on your driveway - not a thought likely to occur to owners of the previous Almera or its predecessor the Nissan Sunny. Still, thanks to what the stylists call "one of the most innovative and spirited looks we've ever created,'' they may even have succeeded. Because it's wider, taller and longer than the car it replaces, this model sits with a greater sense of purpose accented by what's called a 'surf-tail' kicked-up roofline. The shape's practical too, with plenty of headroom and decent space for three across a comfortable back seat that split-folds to reveal 355 litres of space (25 litres more than a VW Golf). In the front, provided you specify the optional side airbags, the seats can be fitted with Active Head Restraints that reduce whiplash injury if you're hit from the rear. Which is a possibility because the braking performance has been much improved thanks to a 'Brake Assist' system that reduces the pedal effort required to activate the ABS by around 30% in an emergency. 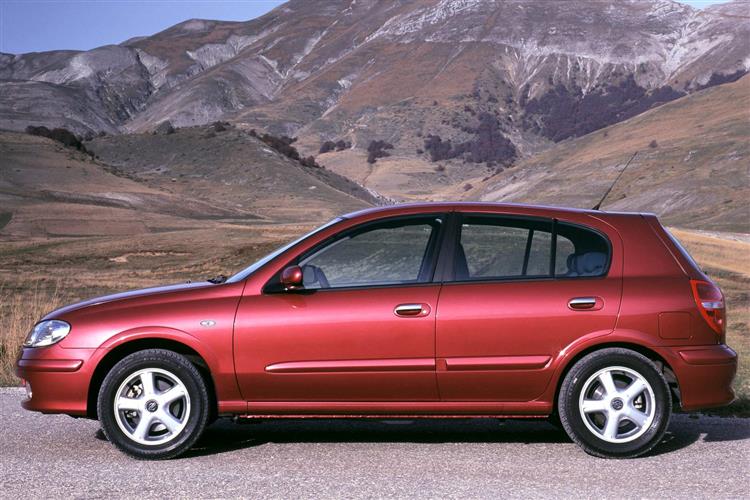