CZECHING IN (some text hidden)

Skoda's original Octavia was always a rather appealing car but the estate versions have always seemed to make a little bit more sense. For a start, they're a little more elegantly proportioned than the hatch. They lose very little in terms of driving characteristics, the range includes a tough all-wheel drive variant and they're ruggedly practical as well. Now could be a very good time to pick up a well looked after Octavia estate for less than you may expect.

The Octavia Estate has had a rather piecemeal development with each product line being introduced as and when it became available. The estate versions were launched months after the hatchbacks, and engine choices appeared and disappeared. The original range consisted of 1.6 litre cars in GLXi Estate 101bhp trim, and 1.8 turbo cars, introduced in October 1999. The 1.8 is the familiar 1.8T turbo unit as seen in the Golf, Passat, Audi A3 and many others, and replaced a normally aspirated 1.8 unit. The 2.0 litre cars were introduced at the same time in GLXi or SLXi trim. A pair of 1.9 litre TDi diesel engined cars were also available. The 90bhp GLX TDi followed, and the range topping 110 bhp SLX TDi was a very desirable compact estate. The diesel-engined models proved very popular with UK buyers, with the 90bhp unit selling in the biggest volumes. An SDi Classic estate was also offered but this is best avoided unless funds are really tight. In October 2000, a revised range appeared with new Classic, Ambiente, Elegance and Laurin&Klement trim derivations. There were minor interior and exterior styling changes, price reductions and specification improvements. The 150bhp 1.8T petrol 4x4 estate followed in January 2001. In winter 2002, the RS was renamed the vRS and an estate version was made available. A TDI 130 diesel followed in the spring of 2003 and summer 2004 saw the second generation Octavia hatch debut. The 'old' shape estate continued on Skoda's books in 2004 as they awaited the intro of the replacement car readied for early 2005.

In five-door form, the Octavia has already been a roaring success throughout Europe, offering Mondeo-sized virtues at Astra-sized prices. Thousands of family hatchback owners have traded up to the larger car they thought they couldn't afford. For the estate version, the prospects have proved to be just as bright. Estate versions of models like the Ford Focus, the Vauxhall Astra and the Ford Focus are impressive cars but they're not much use if you want to carry a fridge freezer, a grandfather clock or a couple of Dobermans. The Octavia, in contrast, can, in this guise, carry 548 litres, or 1,512 litres with the split rear seats folded - more than a Peugeot 406, a Vauxhall Vectra or a Renault Laguna. The load space is versatile too, with glide rails embedded into the floor to make loading and unloading easier. There are also four fastening points to keep awkward packages from sliding about. As you'd expect from a car of this class, a roll-out cover pulls from a housing attached from the back seat, keeping your valuables out of sight. Finally, the space-saving arrangement of the rear axle and suspension allows for a surprisingly wide estate compartment - over one metre at the narrowest point between the wheelarches, which could make all the difference. Clearly, this is no compromised 'lifestyle estate'. Which is not to say that this Octavia is visually unappealing. Quite the opposite in fact. Dirk van Braeckel and his Design Team have created a shape most will feel to be sleek and modern. A modern prestigious badge could easily adorn the prominent chrome grille: your neighbours will certainly expect it. 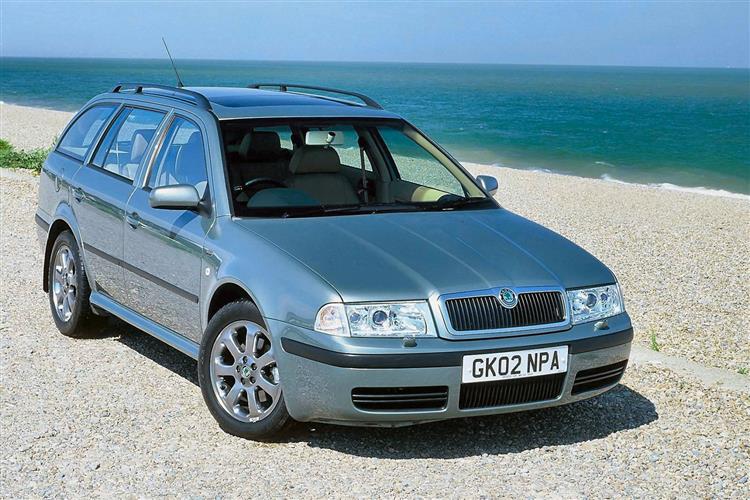