HOW TO RIGHT A BESTSELLER (some text hidden)

The Toyota Corolla has for some years now, enjoyed the title of World's Best Selling Car. Unfortunately, it appeared that somebody had neglected to inform the thousands of buyers eager to sign on the dotted line that the Corolla wasn't actually that good. Toyota put this right in 1997 with the eighth-generation of its chart-topping mid-ranger. The Corolla could at last back the sales figures up with some pretty impressive substance. Though it could never be described as pretty, the Corolla now appealed to an even wider audience than before. Toyota had finally woken up to the fact that competitors had left the Corolla behind and did something about it. A used Corolla from this era may lack charisma but it's certainly not short on ability.

To criticise the way the Toyota Corolla turned out would be questioning the judgement of over twenty million customers. Still, Toyota realised the car wasn't good enough and through 'Kaizen', the policy of continual improvement, the Corolla ingredients were analysed, re-evaluated and remixed to form the 1997 car. Bond villain-like, it carried on the tradition of global domination where its predecessor had left off, but in Britain we've never really warmed to the Corolla. The attractions of rivals such as the Ford Focus, Vauxhall Astra and Volkswagen Golf have been too much, leaving the Corolla as something reserved for geriatrics and photocopier salesmen on the road to a constructive dismissal claim. Toyota certainly wanted to cover all bases. Upon launch in 1997, the eighth-generation Corolla boasted four body styles; a three-door hatchback, a four-door saloon, five-door liftback and an estate. Three engines were available, two petrol and one diesel powered. The petrol engines were of 1.3 and 1.6-litre capacity and developed 85 and 109bhp respectively. The diesel was a 2.0-litre unit, developing 71bhp. In October 1998, new trim levels were announced. The previous Sportif models were redesignated as S models, and a GLS model was introduced, to sit just above the GL specification. Since then there have been a number of special edition models introduced, the most significant being the sporting Corolla G6R, a 1.6 G6 model with bigger wheels, more aggressive body styling parts and a leather interior. This model quickly sold all of the 462 UK cars that were put up for sale. The biggest change to this model Corolla came in early 2000, when it adopted a similar face to the Avensis. This Toyota 'family' look is less distinctive than the previous styling achievement, but the Corolla range was strengthened in a number of ways. The four-door saloon body shape was deleted, the 1.3-litre engine was dropped in favour of a 1.4-litre unit with variable valve timing (VVT-i) and a new 1.6-litre VVT-i engine was also introduced. The diesel versions received a 1.9-litre engine capable of 52mpg, a unit that only lasted until the end of the year when it was replaced by the 2.0-litre D4-D common rail turbo diesel from the larger Avensis. Interiors were spruced up, the body was made stiffer to help handling and the trim levels were rationalised. Four designations were decided upon - S, GS, SR and GLS. By keeping the basic look ostensibly similar, Toyota had unveiled a brand-new ninth-generation Corolla via the back door. The look was far from similar when Toyota rolled out this car's successor at the end of 2001. With sharply chiselled looks, the Corolla had been brought up to speed in the one area it had always been deficient - sharp styling.

The eighth-generation Corolla was designed with the European market in mind and it shows. The exterior styling is far less bland than previous models, although the overall effect is more 'surprised frog' than Euro-sexy. The development of the Corolla World Rally Car helped to add a bit more credibility to the product line, although the Corolla never really campaigned as a driver's car. Inside the cabin, ergonomics are quietly excellent, and the trim is slightly brighter than might be expected from a Toyota. The high-mounted RDS radio cassette player is a nice touch, while the honeycomb-patterned dials are further evidence of Toyota's new-found trendiness. There's plenty of space too - even in the three-door hatch - though with three adults in the back, it's still a bit of a squash. Aircon aside, equipment levels are fairly comprehensive, too. As you'd expect on a mid-sized family hatch, power steering is standard, as well as central locking and a height adjustable steering wheel and driver's seat. Safety's a strong point too, with twin airbags, seatbelt pre-tensioners and three-point centre rear seatbelts fitted across the range. The steering system provides more feel than previous models, while the re-tuned suspension set-up improves ride comfort. Much attention has also been given to sound insulation, to cut down both engine and road noise. All models were fairly well equipped, but only the G6R limited edition was in any way special. Standard fare included electric front windows, electric heated door mirrors, air conditioning, a CD player, remote central locking, electric sunroof and remote releases for the fuel flap and rear hatch. Leather seats with red stitching were fitted and the G6R came complete with both driver and passenger airbags, ABS, seatbelt pre-tensioners and beefy disc brakes. Perhaps the most significant thing about the eighth-generation Corolla however, is the fact that though initial cars were shipped from Japan, from the start of 1999, this model, like its larger Avensis stablemate, was built at Toyota's Burnaston factory in Derbyshire. 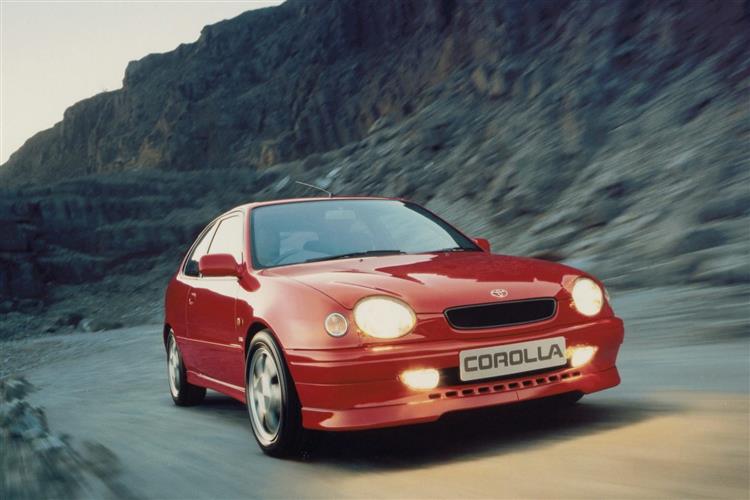