The Leganza marked a diversion from Daewoo's initial strategy of unadventurous small cars. As part of the second wave of Daewoo vehicles to arrive in the UK, and a more ambitious offering than anything the Korean giant had yet introduced, the Leganza placed a toe in the water in a marketplace brimful with quality offerings from the mainstream manufacturers. Going up against established competition such as the Ford Mondeo and Peugeot 406 was never going to be easy, but the combination of luxurious levels of trim and a very competitive price aimed to give the Leganza the best possible chance. Traditionally appealing to a mature clientele who place a premium on value, reliability and a watertight warranty agreement, Daewoo's models won't attract those who prioritise refinement and handling. It's well equipped, should prove reliable and you won't see many other ones out on the road.

The Leganza was launched to the British public in September 1997. The range has remained largely unchanged since launch except for the introduction of the CDX-E model in 1998. The four-door body shape was the sole variant, as was the 2.0 132bhp engine as fitted to the Nubira CDX models. Whilst not as punchy as in the smaller, lighter, Nubira, the overall comfort bias of the Leganza does not encourage press-on driving. There were three available trim levels, the base SX, the CDX and the range topping CDX-E model. All variants are available with the option of five speed manual or automatic gearboxes. The last Leganza models were sold in early 2003.

In short, almost everything. As befits the top model of a new range, Daewoo went out to stuff as much standard equipment as possible and this bumped new prices uncomfortably close to more charismatic four door saloons such as the Rover 75 and Alfa 156. A short drive in a Leganza can turn into a major button-pressing experience. Even the base SX model adopts a belt and braces approach with an electric sunroof and air conditioning as standard. Weigh in tinted glass, a fiendishly complex six speaker stereo system, electrically adjustable/heated mirrors and remote central locking with immobiliser and alarm and a clear picture begins to emerge. Specify any of its similarly priced rivals to this level and the comparison becomes fatuous. The CDX model adds alloy wheels and a cleverer climate control function, ultrasonic alarm, leather steering wheel and wood effect trim. Specify the automatic and a leather gear knob is standard. At the top of the tree is the CDX-E. Specifications here are similar to the CDX but with the addition of Phillips CARiN satellite navigation, larger alloy wheels, leather upholstery, electric drivers seat and a Sony 10 disc autochanger. Despite, or perhaps because of, its luxury pretensions, the Leganza has sold in numbers most generously described as modest. Privately sold models are rare, and the best chance of securing one may well be through a Daewoo franchised dealer. Expect to see three year old cars which are just out of warranty for sale in increasing numbers, and these should represent an interesting bargaining opportunity. 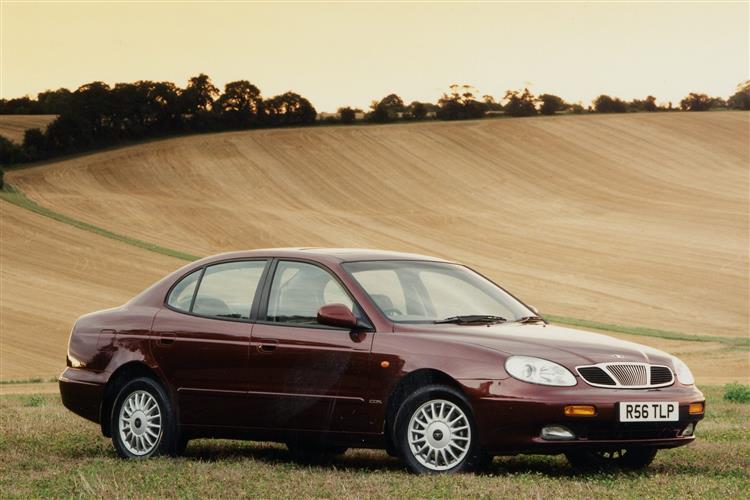