Thinking of buying an ordinary family saloon? You might be surprised to learn that for the same price, a curvy third generation BMW 3 Series could be residing in your driveway. Your neighbours will mistake it for a new car and you'll be taken for someone of taste, rather than a photocopier salesperson. At least, that's according to BMW...

The swoopy third generation BMW 3 Series, with its aerodynamic bodywork and fared-in front headlamps, came to Britain in the early Spring of 1991. Petrol-powered saloons were all that was originally offered; the four-cylinder 318i and six-cylinder 320i and 325i derivatives. An entry-level 316i four-cylinder variant followed that summer. Diesels became a key part of the saloon range, with a silky-smooth 2.5-litre six-cylinder turbo diesel model - the 325 td or tds - launched in May 1993. A four-cylinder turbo diesel variant - the 318tds - was launched at the end of 1994. Back to bodystyles. In January 1992, a Coupe version was launched, originally with 1.8 four-cylinder and 2.0-litre and 2.5-litre six-cylinder engines (318iS/320i & 325i). The 16v 1.8-litre unit was more potent than the 8v engine used in the Saloon - hence the S designation after 318i; the forthcoming 318Ti Compact model apart, it was to remain unique to the Coupe until March 1998 when a South African-built saloon version arrived. A flagship 3.0-litre Motorsport-tuned M3 flagship followed in early 1993 and an entry-level 316i version in early 1994. Convertibles were announced in the early Spring of 1994, with a choice of 318i, 320i and 325i derivatives. A potent M3 version followed that summer. Looking for an affordably-priced range-leader, BMW's next move was to introduce a three-door hatchback version - the Compact - in the autumn of 1994, originally priced from just £13,000, top Escort money. This was offered with the entry-level 1.6-litre petrol engine and the 16-valve 1.8-litre petrol unit from the 318iS Coupe. The rare 1.8-litre turbo diesel version was announced the following autumn. The Touring estate was the next bodystyle to see the light of day, launched in March 1995 with familiar engines from the 318/325tds diesel models (a petrol 318i version followed early in 1996). There was also a slightly revised 2.0-litre six-cylinder petrol engine for the 320i variant and an all-new 2.8-litre six-cylinder petrol unit for the 328i flagship. This 2.8-litre engine quickly replaced the 325i saloon, coupe and convertible with 328i variants (from March 1995 onwards). At the same time the Coupe range was boosted with a 323i derivative which replaced the previous 320i. Contrary to its name, this had a 2.5-litre six-cylinder petrol unit. The engine was subsequently used (again replacing 320i variants) in the saloon from the autumn of 1996 and from early 1997 in the Touring and convertible ranges. Meanwhile, at the top of the range, the M3 was now being offered as a saloon (from December 1994 onwards). From January 1996, all three M3 bodystyles were fitted with an even faster 3.2-litre six-cylinder engine and were re-christened M3 Evolution. Anti-lock brakes were standardised on all models in 1992 and, airbags arrived as standard fare from September 1993. Catalysts were part of the recipe since the car was first introduced in 1991 along with a range of safety features that have earned the marque the respect of its customers. All models got a minor makeover in September 1997 that included equipment upgrades and subtly different front end treatment. The saloon range was replaced in September 1998 by an all-new line-up. The new Coupe model arrived in May 1999, with the new shape Touring model following in the Autumn of that year

What You Getword count: 35

German bite, pure and simple. A 3 Series is smaller than a Mondeo, but you won't care about that. For the driver, this was the most rewarding compact car of its era - bar none. 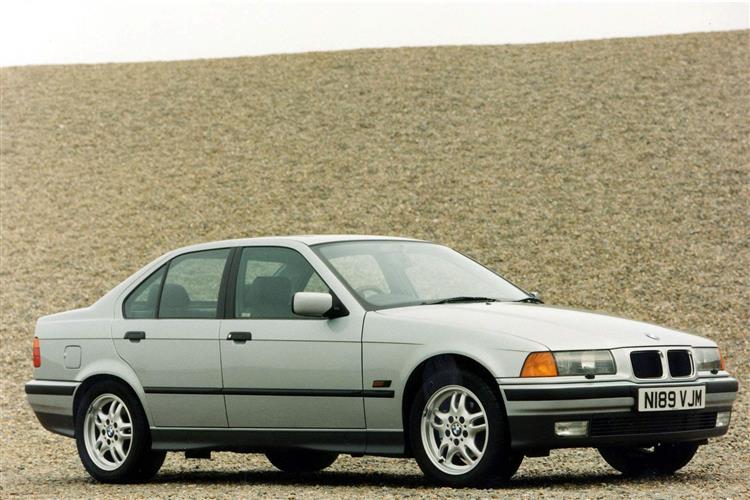