After the furore caused by the controversial styling of the 5 Series, the launch later in 2003 of the 6 Series was virtually a low key event. Based on a modified 5 Series chassis, the Six offered a sleek coupe shape and was followed shortly thereafter by a Convertible version. Both cars are in strong demand, with few natural competitors. As a used buy, these cars are just starting to make sense, the earlier models having had the sharpest edge taken off the depreciation curve.

The BMW 6 Series had a lot to live up to. Many of us fondly remember its shark-nosed predecessor. Although it stayed around a little longer than perhaps it should have done, this was a car that oozed charisma, with classic old shots of 6 Series Touring Cars making it one of the coolest cars the late seventies produced. Although it's doubtful the current 6 Series will ever attain that cachet, it is, in many ways, a car similar in philosophy. Customers after a high-end GT coupe that can lift its skirts and hustle bought the original 6 Series then and buyers looking for the same qualities are attracted to today's Six. Introduced in December 2003, the 6 Series was initially offered with just a 645i coupe model available. A convertible model followed in February 2004 and it wasn't until August 2004 that the range was augmented with another engine - in this case the entry-level 630i, offered in both coupe and drop top forms. The ultimate 6 Series was unveiled in summer 2005 to a rapturous press. The 507bhp V10 M6 coupe featured similar mechanicals to the M5 with a lighter and sleeker body. Deliveries to customers started in late 2005. September 2007 brought a facelifted 6-Series but you had to work hard to spot the changes. For the record, the headlamps gained LED technology that takes the form of a thin row of lights above the main projectors. More obvious was the redesigned front valance that accommodates differently shaped air intakes and at the back, the bumper was tweaked to increase the impression of width. Other than that, the grille is fractionally larger and the rear light clusters have been tweaked. BMW's groundbreaking EfficientDynamics technology was also included boosting economy and lowering emissions across the range.

Core driving functions are located in or around the steering wheel and a simplified version of the iDrive system offers a still enormous amount of driver control with just a few nudges, taps and twists of the serrated metal mouse. The dashboard design is otherwise rather low key, the analogue dials being rather disappointingly small. If the exterior is jam-packed with design details clamouring to catch your eye, the opposite is true of the cabin layout. Yes, it all hangs together very well and seems well built but nowhere does your eye alight approvingly on a signature feature. BMW claim the 6 Series has the largest luggage capacity in its class and there's ample room for a pair of golf bags and a suitcase. Automatic air conditioning and a very respectable stereo are fitted but some small omissions grate. The BMW may be able to carry a decent amount of luggage but don't expect to carry rear seats passengers over 5'9" without complaint. Legroom isn't generous either. No fewer than three transmissions are available to hitch up to the 645i's glorious 333bhp V8 powerplant. Aside from a conventional six-speed manual 'box, there's also a six-speed automatic Steptronic gearbox. Or for those who want the convenience of a sequential manual gearbox but really want to take control when charging hard, there's the F1-style SMG system with steering wheel mounted paddles. The 630i, meanwhile, misses out on the SMG and the M6 is offered exclusively with its seven-speed SMG set-up. 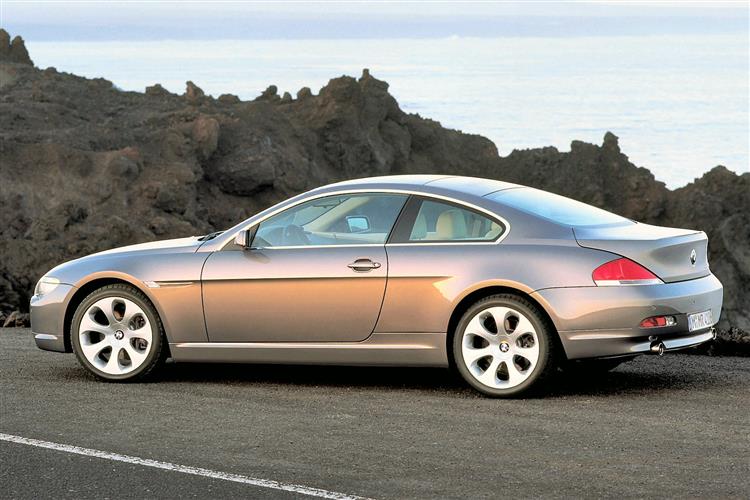